Jefferson county educators Joel Zigman and Elizabeth Hall march during a teachers rally for more educational funding at the Colorado State Capitol on Thursday, April 26, 2018. The Colorado Education Association said the walkouts are necessary to alert residents and lawmakers about the status of school funding in Colorado. The stateÕs schools are currently underfunded by $822 million and are $2,700 below the national average in per-pupil funding, the CEA said.

Even more teachers are expected on Friday, with nearly 30 school districts — including Denver, Aurora and Cherry Creek — closing their doors

Thousands of teachers from the Jefferson and Douglas County school districts yelled, sang, vented and even partied a bit outside the state Capitol on Thursday during a rally, the first of two aimed at boosting funding for public schools in Colorado.

Many said they felt their voices might turn the heads of some state legislators and reverse the state’s lowly national standing in school spending.

“You know, I’m a teacher so I’m used to not making a lot of money,” said Evelyn O’Dwyer, a second-grade teacher in Douglas County. “But it’s the kids I worry about. What about their future and their programs?

“We just might change some minds with what we are doing today.”

Others had their doubts about the rally’s tangible effectiveness, including Jefferson County parent Kayleen Burke, who watched her two young children play in front of the Capitol steps. Thursday’s event, which drew at least 2,000 teachers and supporters, was good for morale, she said. But it probably won’t shake free more public dollars for education.

Only voting will do that, Burke said.

“I want people to show up and vote and back those candidates that back teachers,” she said. “I think that would shake them up. That would get things done.”

Even more teachers are expected at the Capitol on Friday, with nearly 30 school districts — including Denver, Aurora and Cherry Creek — closing their doors because of the teacher walkouts. At least 600,000 students will get the day off as districts cancel classes because of a lack of teachers in classrooms.

The Colorado Education Association said the walkouts are needed to alert residents and lawmakers about the paltry status of school funding in Colorado. The state’s schools, currently underfunded by $822 million, are $2,700 below the national average in per-pupil funding, the CEA said.

Also, only Oklahoma and Arizona spend less than Colorado on services for students with special needs.

The teachers want lawmakers to increase funding for schools by making a down payment on the budget stabilization factor — also known as the negative factor — of at least $150 million this year and pay if off by 2022.

Lawmakers must also commit to reducing or freezing corporate tax breaks of all kinds until school funding is restored and per-pupil funding reaches the national average, the CEA said. Legislators must increase the state’s cost of living allowance for retirees to encourage more people to enter the teaching profession, the CEA said.

“We must have a secure retirement in order to encourage people to go into the education profession and stay for a full career,” said CEA president Kerrie Dallman.

On a gray, chilly morning on Thursday, the teachers and their supporters began gathering at the Capitol steps well before 9 a.m. and were fortified throughout the day by impassioned speeches, live music, and, later, coffee, pizza and doughnuts. At one point, someone started blowing bubbles and teachers sang the Twisted Sister tune “We’re Not Going to Take It.”

Feistiness was a theme throughout the day.

“Stand up and fight!” teachers shouted from the state Capitol steps amid cheers and waving signs. “We are Jeffco!” others chanted.

Some lawmakers joined them. Cary Kennedy, a Democratic candidate for governor, told the teachers that GOP lawmakers “want to silence your voice,” but, instead, “you need a raise!”

Kennedy was referring to a bill introduced by Republican lawmakers Sen. Bob Gardner and Rep. Paul Lundeen. Senate Bill 264would hit teachers and teachers associations with potential fines and jail time for striking.

The bill drew quick fire from all 16 Democrats in the state Senate, who called the legislation “un-American” and said it would strip teachers of basic rights.

Teachers were joined by supportive students and others, including the regional carpenters union and Comedy Central personality Laura Grey, who was surrounded by cameras. Many passing motorists honked support. And one homeless man backed the teachers.

“My first-grade teacher was awesome!” he yelled.

One motorist took the time to roll down his window and yell “Go back to work!” at the teachers as they marched and encircled the Capitol building. One teacher shrugged at the remark and declared a victory — of sorts. “Well, at least he didn’t flip us off,” the teacher said. “That’s encouraging.”

Douglas County math teacher Heidi Geyer arrived at the rally wearing a “skirt” of receipts from several big box stores to illustrate how much of her own money she has spent on her own classroom.

“A lot of people are out here that lawmakers should listen to,” Geyer said. “Things just have to change.” She declined to say how much the receipts totaled. 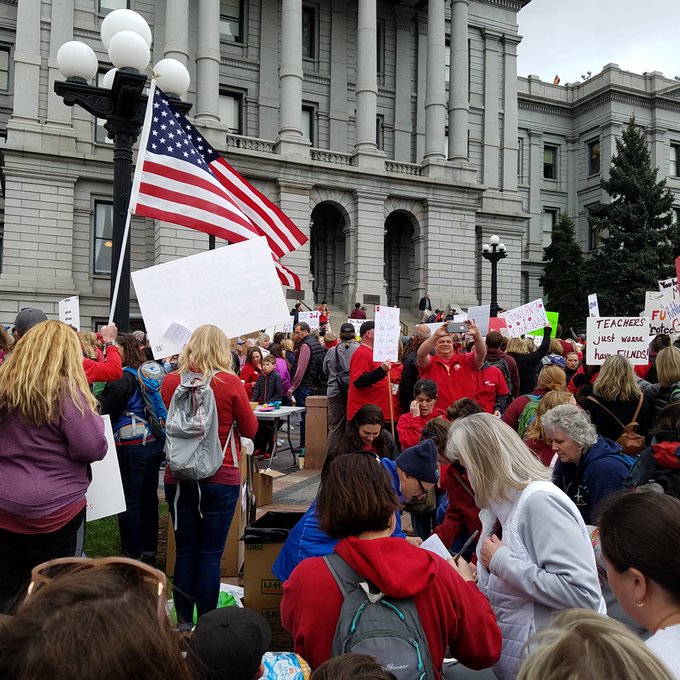 Democratic lawmakers have been rallying behind teachers, agreeing with them that more money should go to K-12 education.

Republicans, however, have pushed back — especially at the notion of pouring more into education instead of paying down the billions in needed road repairs.

He noted that the legislature this year has set aside an additional $150 million for education — $50 million more than the additional amount requested by Gov. John Hickenlooper — and that education funding has been increasing for years.

“We’re talking about an almost (8) percent increase year-over-year for education funding, and to me, that’s a huge win for the people of Colorado,” Hill said. “We’ve been funding this well. We need to fund transportation and catch up on that as well.”

Cherokee Trail Elementary School teachers Madison Levine and Erin Coggan (sixth grade) grade papers outside of the senate chambers as Sen. Kevin Lundberg walks by during a teacher’s rally for more educational funding at the Colorado State Capitol on Thursday, April 26, 2018. The Colorado Education Association said the walkouts are necessary to alert residents and lawmakers about the status of school funding in Colorado. The stateÕs schools are currently underfunded by $822 million and are $2,700 below the national average in per-pupil funding, the CEA said. 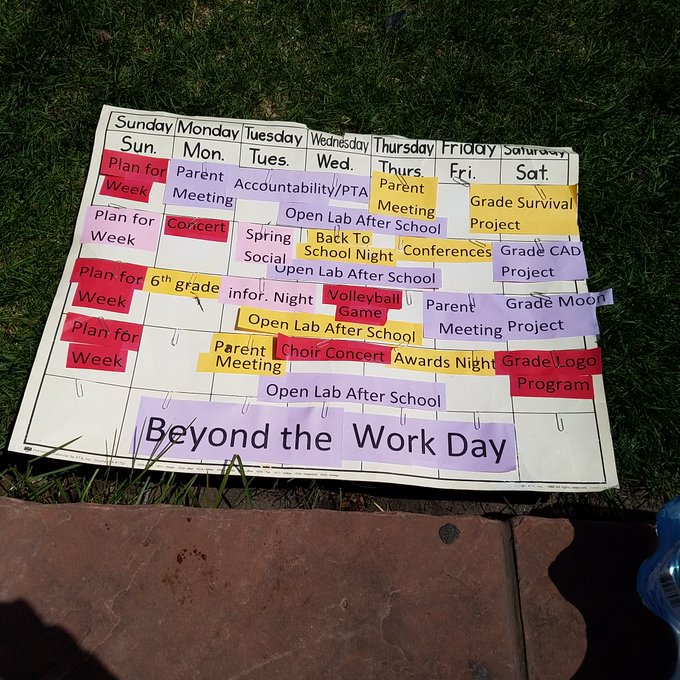 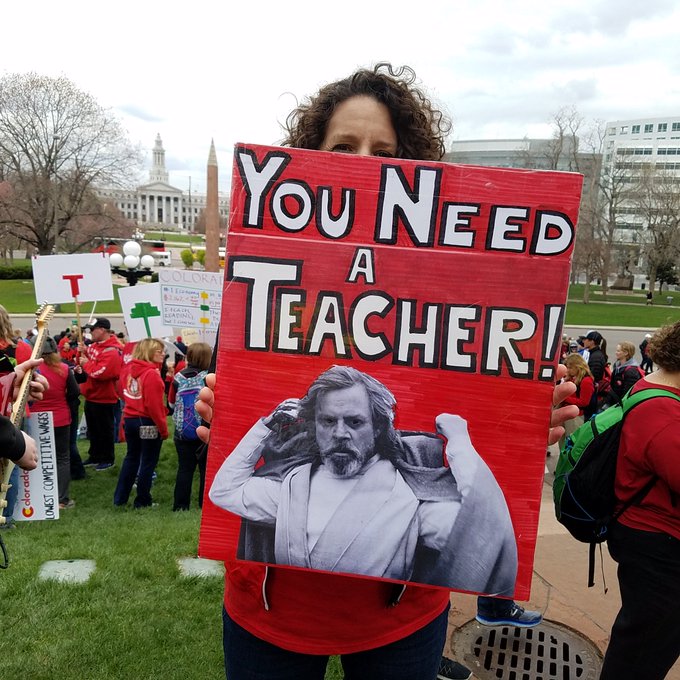