Classes are canceled at dozens of schools across Colorado today as thousands of teachers are expected to converge on the capitol.

In Southern Colorado, District 11, Academy District 20, Lewis-Palmer School District 38, Falcon District 49, at least 11 schools in Pueblo’s District 60 and several others have made the decision to cancel classes for the day.

Thousands of teachers from all across the state will gather together to get lawmakers attention. Following in the the footsteps of educators from West Virginia, Kentucky, Oklahoma, and Arizona, teachers in Colorado are demanding more dollars for their classrooms, better PERA funding for their retirements, and higher wages.

“Enough is enough, and this state has underfunded us for so many years that we simply just have to say that we can do better by our students,” Phyllis Robinette, a 2nd grade teacher and President of the Pikes Peak Education Association said. 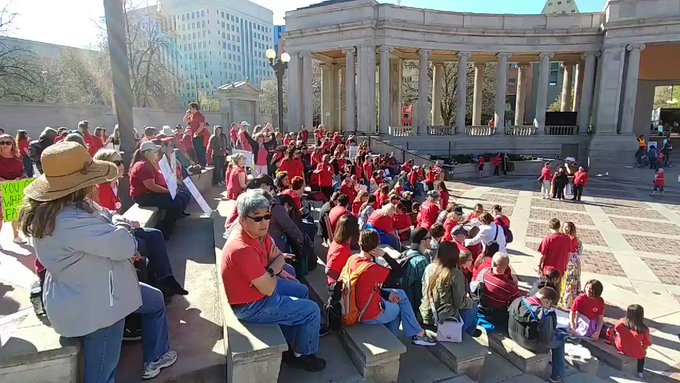 Teachers rally for education getting ready in Denver this morning.

Although Colorado has one of the top economies in the country, its schools are underfunded by $822 million, according to the Denver Classroom Teacher’s Association. This group also says that Colorado invests about $2,700 less per pupil than the national average.

“In my 32 years I never, never would have seen this coming and I guess when I started my career, I never knew that all of the sudden I would have to defend public education and the right that our students have,” Robinette said.

Teachers will start gathering at Denver’s Civic Center Park on Friday at 9 a.m. They will march to the Capitol at 10 a.m. where they will start their demonstration and a full day of activities. The rally will begin on the west steps of the capitol at 2 p.m.

News 5’s Lena Howland and Shayla Girardin will be there all day with complete team coverage on-air and on Facebook, Twitter, the News5 App and KOAA.com.

Below you can find a list of schools that have canceled classes for Friday.

Pueblo District 60 has not yet canceled classes district-wide, but individual schools are closing Friday. Here is the list:

Widefield Schools will also be closed Friday, but that day off was scheduled before the school year began.

If you’re looking for childcare options as your child is not in class, check with the YMCA of the Pikes Peak Region.