The state teachers union is the latest party to take aim at a controversial annual ranking of Hawaii’s public schools compiled by Honolulu Magazine.

The magazine’s April 2019 yellow-hued cover stamped with the headline, “Grading the Public Schools,” features an inside spread that grades each of the state’s 292 public schools on an “A+ to F” scale based on things like math, reading and science scores and math and reading growth rates, among other things.

It first raised the ire of the school superintendent.

In a short article posted to the Hawaii Department of Education website last month, Christina Kishimoto noted there was “no nuance or context, no trend data indicating where there have been improvements” among the public schools nor mention of challenges facing certain communities like high poverty or unique cultural needs. 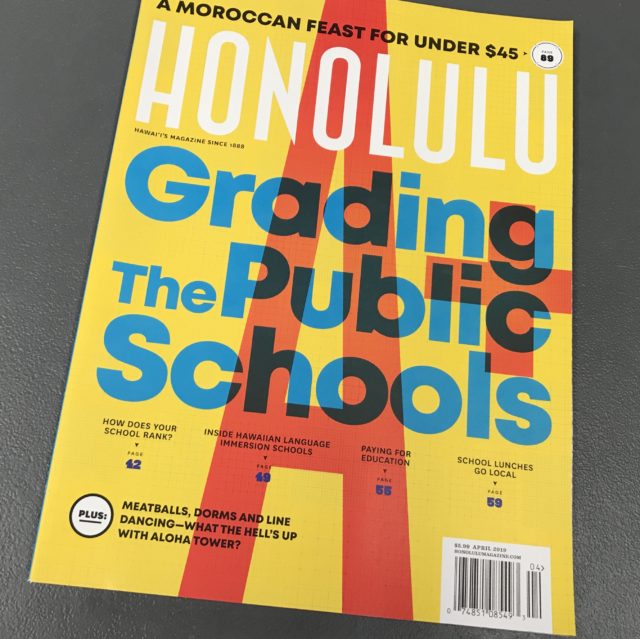 She also argued the ranking of public schools is unfair next to the publication’s analogous private school issue featuring “lovely pictures and narratives about the private school experience” and the schools’ own special stories, with no rankings based on performance data.

That guide, the most recent of which was published in August 2018, is also compiled in partnership with private institutions like American Savings Bank.

“Please stop grading Hawaii’s public schools,”HSTA president Corey Rosenlee implored in a recent post on the group’s website that will be published in condensed form in the magazine’s June issue.

Rosenlee discussed why a reliance on the Smarter Balanced Assessment to grade schools is simplistic and harkens back to the expired No Child Left Behind era.

The federal policy was replaced in 2015 by the Every Student Succeeds Act — which provides more flexibility to schools beyond test scores as far as evaluating students.

“By holding onto failed policies, Honolulu Magazine is perpetuating the idea that the only things that matter are math and reading test scores,” Rosenlee writes. “It hurts the ability of our teachers to provide diverse learning experiences for our keiki.”

The HSTA, which represents the state’s 13,700 teachers, has lobbied the Legislature against an overemphasis on standardized testing, and has sought more funding overall for public schools.

Honolulu Magazine, according to 2015 data, is distributed monthly to 37,000 print subscribers and reaches more than 250,000 online visitors monthly. It has been publishing the rankings since 2003.

Rosenlee, in his post, said he recently met with the magazine’s publisher and managing editor to discuss the HSTA’s concerns and explore how other non-test score categories could factor into the magazine’s annual public school issue, such as teacher vacancies, number of emergency hires or percent of kids who qualify for free lunch.

Publisher Alyson Helwagen, according to Rosenlee’s blog post, was committed to finding a more representative way to evaluate public schools based on the conversation.

In its own introduction to the latest rankings, the magazine appears to anticipate some blowback. “We know ranking schools is controversial,” the intro states, adding that parents may prioritize school characteristics differently and so they should take the list “with a grain of salt.”