Sen. Elizabeth Warren’s first presidential campaign event in Pennsylvania was spent in a Northeast Philadelphia union hall, taking questions from teachers and students and rousing the crowd with the prospect of putting a former public schoolteacher in the White House.

The senator from Massachusetts spoke to about 200 educators and 100 students from Abraham Lincoln High School in Holmesburg.

The afternoon conversation, hosted by the American Federation of Teachers as part of its vetting of candidates for endorsement, was closed to the public but available on the AFT’s Facebook page.

Warren said she knew in second grade that she wanted to be a public-school teacher. “I practiced, I used to line my dollies up and teach school,” she said. “I was tough but fair.”

She said she wants to be president to give people more opportunity: “Teachers understand this: We invest in the future.”

Warren, a law professor who worked as a New Jersey special education teacher earlier in her career, has stumped on the need for more federal funding of public schools, universal child care, and pay standards for early-childhood teachers. She has also unveiled a plan for student-debt forgiveness and free tuition to two- and four-year public colleges — all topics she touched on Monday.

Promises of a pro-public school administration

Hours before her appearance, Warren promised in a tweet that her secretary of education would have experience teaching in a public school.

“I want someone who has seen tattered textbooks or who has tried to manage when there are too many kids in a classroom … someone who has actually been there and taught a child to read,” Warren told the crowd, drawing cheers.

There’s no greater example of how we’re failing students and teachers than Betsy DeVos, the worst Secretary of Education we’ve seen. Appointed despite her conflicts of interest, she’s spent her time protecting for-profit colleges that break the law and cheat students.

But Betsy DeVos is just a symptom of a badly broken system. We’re up against powerful forces, and to win, we need big structural change. So here’s my plan: Under a Warren administration, the Secretary of Education will be a public school teacher. pic.twitter.com/4M33NGTNJt 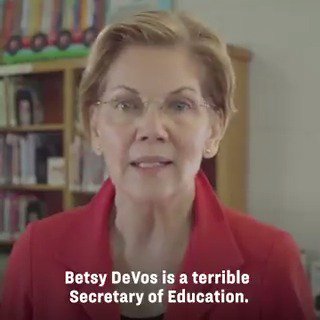 1,466 people are talking about this

The event came five days before Joe Biden holds his first public event in Philadelphia — at Eakins Oval on Saturday — and a week ahead of a rally for President Donald Trump near Williamsport.

Here’s how Warren responded to some questions.

Warren, whose mantra on the campaign trail has become, “I have a plan for that,” eagerly laid out her plan to forgive 95 percent of student loan debt, paid for by a 2 percent tax on wealth of $50 million or more. It would cancel up to $50,000 of loans for 43 million students.

“This is … one of the core changes we need to make in this economy,” Warren said.

Student loan debt, she said, “is like dumping rocks” on students, particularly minorities. “No great country builds a future by crushing people who are trying to get an education.”

She said the plan would reduce high teacher turnover, which in some cases stems from younger teachers unable to pay off student loans on public school salaries.

On whether she can appeal to Republicans and beat Trump

Warren, a leader of the Democratic Party’s liberal wing, has at times faced skepticism over her ability to win compared with a candidate seen as more moderate, like Biden. One educator, who is registered as independent, asked Warren how she would bridge the partisan divide to appeal to independents or even conservatives.

She told the crowd that her economic justice policies, such as student debt forgiveness, are popular across party lines. She mentioned her own family: Only one of three brothers is a Democrat.

“Imagine our Thanksgivings,” she joked. “But the point is, on the core values, we’re all there.” All of her brothers support access to affordable health care, pre-K education, and affordable college, she said. “They want to see an America that’s opening opportunities, so I think we can do this.”

Asked how she’d empower women, Warren recalled the way she overcame being written off in her bid for her Senate seat.

Her mantra became: “I’m running for Senate because that’s what girls do.”