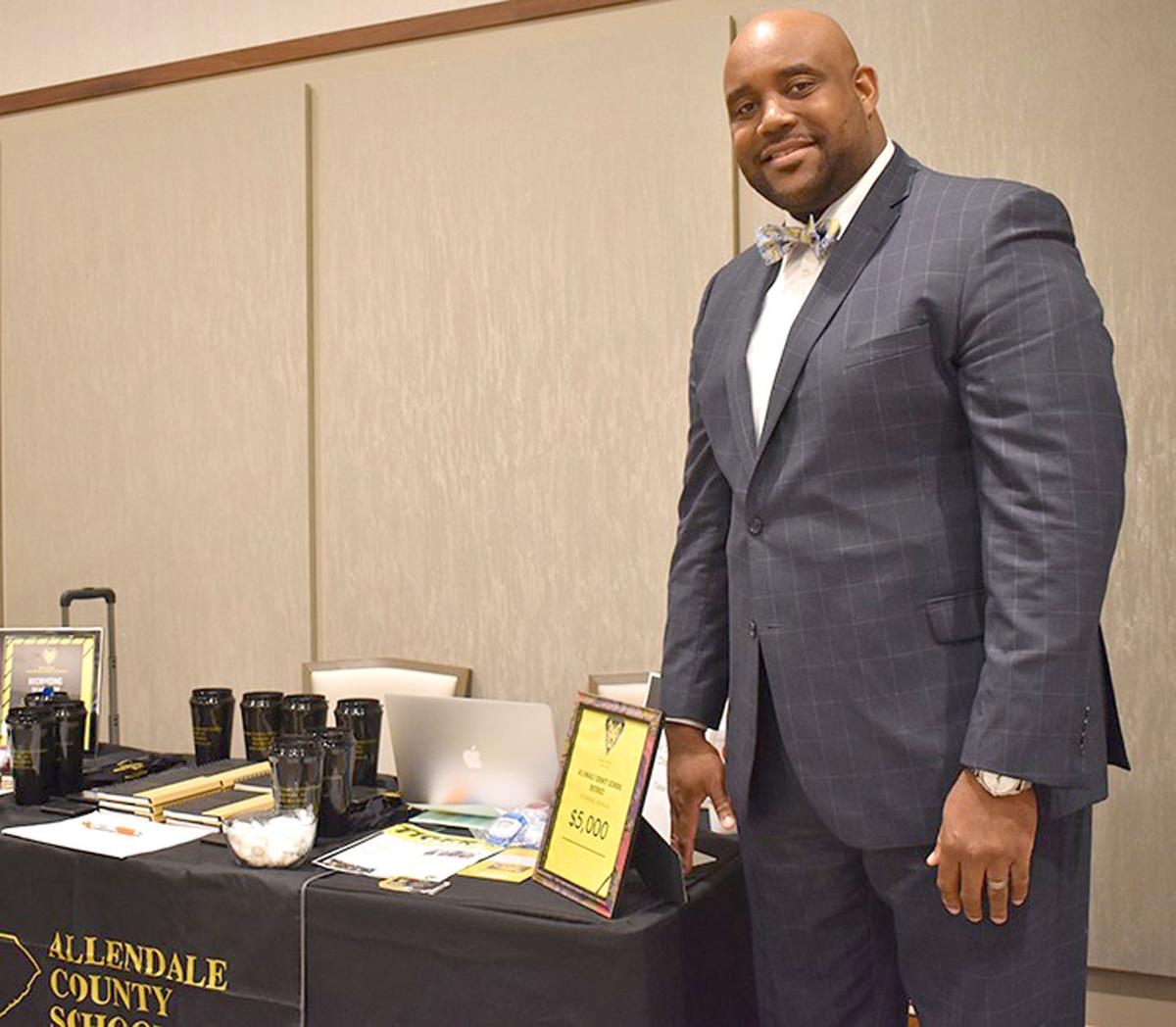 Kalu Kalu Jr., director of human resources for Allendale County School District, hopes to bring more teachers to his district as the teaching shortage continues to grow in South Carolina. 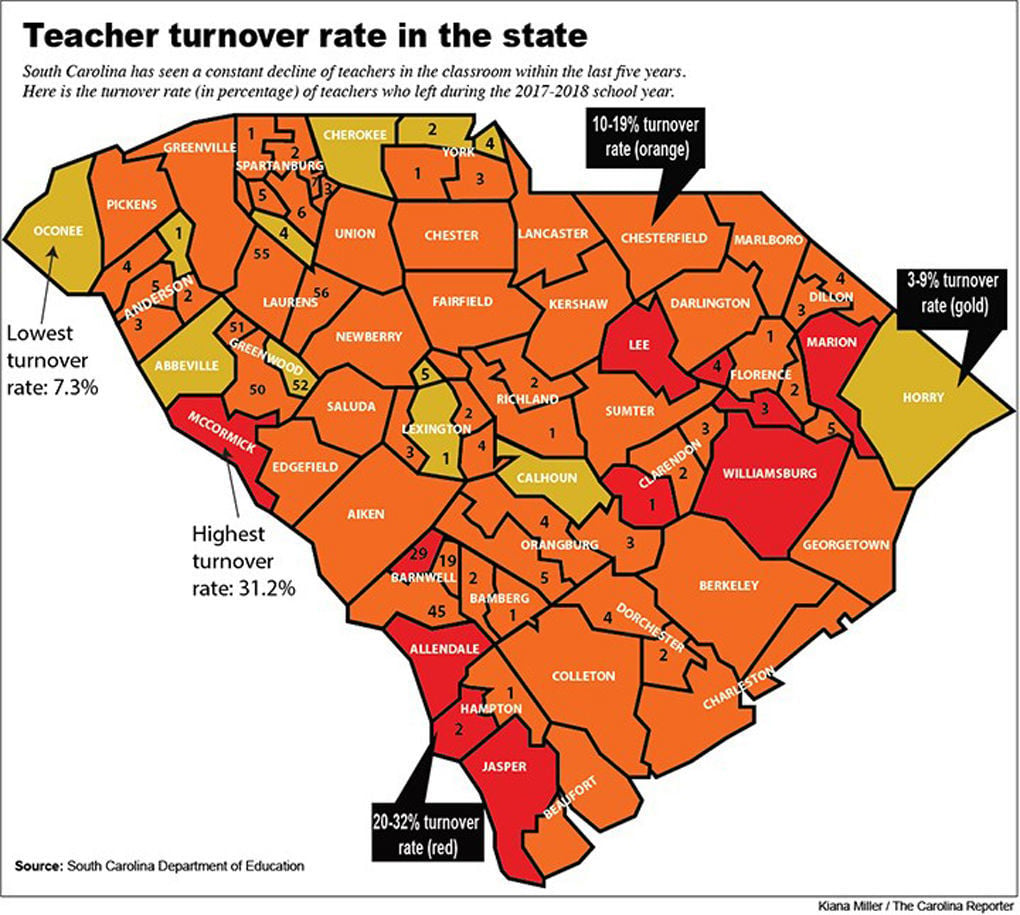 “The issue at hand is why are we not seeing more people going into education and individuals staying in education,” said Derrick Hines, the Teaching Fellows campus director and Teacher Cadet College coordinator for the University of South Carolina.

“We’re seeing more individuals leaving the field than there are coming into it, and of course economically that creates a supply and demand problem.”

In the last five years, students completing a four-year education degree who were eligible to become certified teachers for public or private schools decreased from 2,060 in 2014 to 1,642 in 2018. That’s according to the Center for Educator Recruitment Retention & Advancement, or CERRA. The non-profit located on the campus of Winthrop University was founded in 1985 by the S.C. Commission on Higher Education to boost teacher ranks and professionalism.

“How do we stop the bleeding and then how do we fix the issue?” Hines said.

Hines coordinates two programs within the university that expose high school students to the field of education.

Historically, South Carolina has ranked abysmally low in educational progress because of poverty, racial disparities and a lack of funding. In 2018, South Carolina ranked 48th in the nation for education, according to U.S. News & World Report. The exiting of teachers from k-12 classrooms coupled with the shortage in new teachers is a one-two punch that has staggered school systems.

According to CERRA, 5,341 teachers left their positions last year and are no longer teaching in the state. This is a 30 percent increase from the 4,108 teachers that left South Carolina schools during the 2014-2015 school year. The flight from schools has alarmed the state Legislature, which is considering measures to raise teacher salaries and lift some of the more stringent standardize testing requirements that limit classroom teaching.

Experts say teachers are abandoning their positions for better opportunities in more affluent counties and states.

School districts across the state are not only re-evaluating their recruitment methods of newer teachers but are also looking for ways to improve teacher retention. Some poorer, rural school districts like Allendale, who had a teacher turnover rate of approximately 21 percent in the previous school year, offer signing bonuses to entice prospective educators.

Kalu Kalu Jr., director of human resources for Allendale County School District detailed some of the ways his district attempts to replenish the small pool of available teachers.

“We give them that family feeling, provide them with housing and amenities through the University of South Carolina-Salkehatchie at a low rate so they aren’t overwhelmed with large expenses,” he said. “We even offer a signing bonus of $5,000 to help get them started.”

While Allendale School District attempts to create a nurturing work environment for new teachers, many of them leave because they lack mentors and feel unprepared. According to CERRA, every new teacher in the state must be mentored during their first couple of years teaching.

Allendale School District was taken over by the South Carolina Department of Education in 2017 – the first takeover was in 1999 – due to continued poor academic performance of its students. Since the state’s latest takeover, Allendale County has made notable progress with two of its schools and one of its schools was two points away from having a rating of excellent.

Allendale County School District is still under state control. Allendale Fairfax High School is the only school that remains on the priority list for the school district.

More affluent school districts like Horry County have been affected by the teacher shortage as well. Quintina Livingston, principal of Whittemore Park Middle School, said it is important for school districts to build a strong connection with its newer teachers.

“We attract people who aren’t from South Carolina, so when there’s not an attachment to the area our teachers leave, both older and younger,” Livingston said.

Horry County School District still faces challenges with preparing newer teachers for the field. Mia Toomer, the assistant principal of Socastee High School, believes that many of the newer teachers aren’t aware of what the job entails.

“They may not have a true understanding of what all they are accountable for,” Toomer said.

Creating programs that give newer teachers the opportunity to express how they feel during their formative years, competitive pay and providing supportive environments may be key to retaining them after they entire the door.

Jennifer Garrett, coordinator of research and program evaluation for CERRA, has been tracking the growth in teacher turnover rates across the state.

“A lot of these departures are retirements. We’ve had a pretty significant increase in retirements this year and there’s nothing we could really do about that,” Garrett said.

With unequal resources across districts within the state, especially in the rural districts and along the I-95 corridor, attracting teachers and keeping them in the area has become a big enough crisis that the Legislature has determined that funding and improving K-12 education will be its top priority in 2019.

Carson Dixon, a second-year teacher at Blythwood Middle School, has found support through mentors within her district. Dixon hopes to make an impact as a new teacher by being a face that her students can depend on seeing year after year.

“Many of the kids I see wonder if their relationship with us will even matter, like will we even be here next year,” Dixon said.

Dixon grew up in Spartanburg, where she was educated in Spartanburg County School District 6. As Dixon graduated from USC, she felt prepared for some classroom environments but not others.

“Leaving undergrad, I was prepared content-wise. I don’t think I would have been prepared to handle that well if I went to any schools in the Corridor of Shame,” Dixon said.

The Corridor of Shame refers to the stretch of 36 impoverished, rural school districts along I-95 who historically have struggled with academic performance. The region is known for its hardships regarding its individual economies and what many feel is a racial disparity in access to basic quality education due to the large minority population within these schools.

With the hope of improving teachers’ environment within the classroom, South Carolina Legislature is currently in the midst of editing its proposed K-12 bill due to much criticism from teachers.