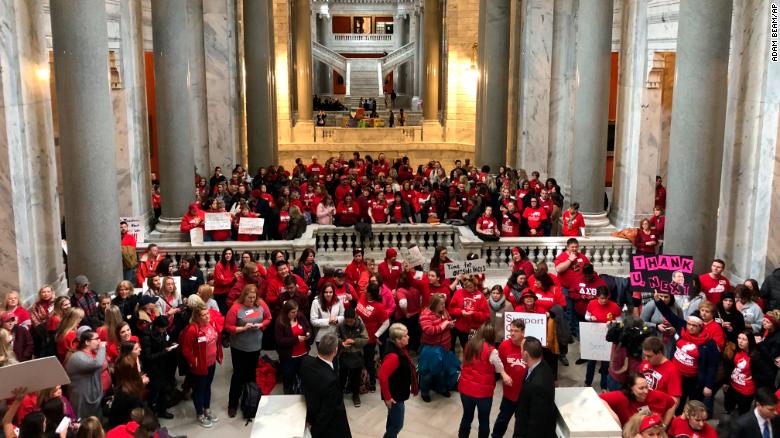 Hundreds of teachers fill the Kentucky Capitol on March 7.

(CNN)Several Kentucky school districts were closed Thursday after teachers called out sick to voice their opposition to a bill they believe will benefit private schools at the expense of underfunded public schools.

It wasn’t clear exactly how many teachers called in sick, but at least three school districts said they were closed due to teacher absences, including Jefferson County Public Schools, the state’s largest school district that serves 100,000 students, according to CNN affiliate WKYT.
It was the third day in the past week that Jefferson County schools were closed, WKYT reported.
Representatives for Kentucky 120 United, an advocacy group for public employees, told CNN that over the last two weeks educators have voiced their opposition to two bills before the General Assembly.
On Thursday, teachers called out sick to protest HB 205, which would provide tax credits totaling $25 million a year to people who donate to private school scholarship programs.
The bill’s backers say it would give more school choice options to families.
Scholarships generated by the donations would help children from low- and middle-income households attend private schools — should they so choose — advocates say.
But the bill’s opponents say the bill could someday lead to fewer students in public schools, which are funded on a per-pupil basis, ultimately resulting in lower state funding, according to CNN affiliate WDRB.
School superintendents have joined the teachers, and held press conferences on Monday imploring the assembly to not pass HB 205, WDRB reported.
The bipartisan Legislative Research Commission said the bill would cut $7 million from the general fund for the current fiscal year. Its analysis forecasts a possible net reduction of $209 million by 2025. The analysis says transfers of students from public to private schools could hurt funding for local districts. 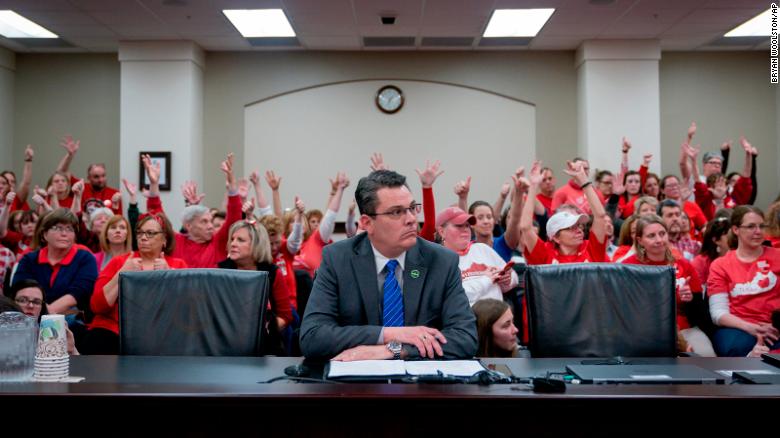 In a room packed with teachers, Kentucky state Rep. Ken Upchurch talks about a bill that will change how individuals are nominated to the Kentucky teachers retirement systems board of trustees.
Jeni Bolander, a public school teacher and zone leader for Kentucky 120 United, said the group did not call for teachers to call out sick this week, but would stand in solidarity with colleagues who chose to so.
“None of us have a problem with private schools if that’s what’s best for your family,” she said. “However, I have a big problem with public dollars going to private schools, and that’s what’s happening here.”
Another teacher and zone leader for Kentucky 120 United, Paula Pleasant, told CNN that “as educators, we should be able to focus on the real issues in our classrooms and communities,” rather than worrying about getting the proper funding for public education.
Gov. Matt Bevin tweeted his disapproval of the teacher absences on Wednesday night, writing, “School children should be in school… Learning…”
Teachers also called out sick last Thursday to participate in a day of action in Frankfort to protest another bill, HB 525. That action was initiated and backed by Kentucky 120 United. 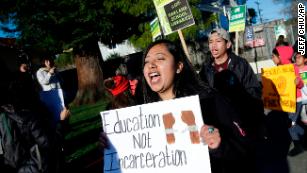 With a promise of more money and smaller classes, striking Oakland teachers return to school
HB 525 would have made changes to who is appointed to the board of trustees that oversees the Kentucky teachers’ retirement system, which administers teacher’ pensions. Teachers in Kentucky do not pay into Social Security, so they rely heavily on their pensions after they retire.
Bolander told CNN the bill would have “taken more voice away from the teachers” when it came to their pensions.
HB 525 would diminish the power of the Kentucky Education Association in the selection of the board overseeing the retirement program, WKYT reported. Its sponsor said the board should not be controlled by one educator group.
The bill ultimately advanced out committee, but Bolander said that Kentucky 120 United is satisfied with changes made to the bill since last week’s protests, and was confident teachers’ voices would still be heard.
The recent actions by teachers take place almost a year after 20 counties closed schools due to teachers calling in sick after the state legislature passed controversial pension reform, which was eventually signed into law by Bevin.
JOIN THE MOVEMENT #iBELIEVE