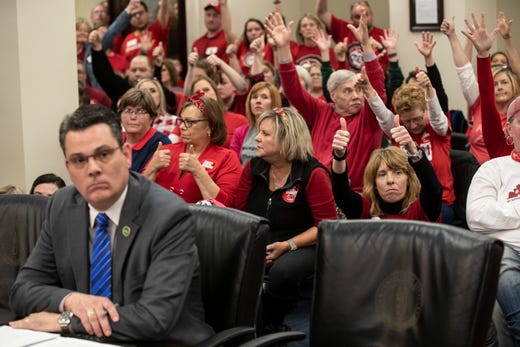 LOUISVILLE, Ky. (WDRB) — Kentucky’s largest school district has called off classes for the third day in a week as teachers plan to continue demonstrating at the Capitol against bills they see as anti-public education.

JCPS canceled Thursday classes around 9:30 p.m. Wednesday “due to significant teacher absences and the inability to safely cover a large number of classes with substitute teachers.”

A leader in the group of Jefferson County Public Schools teachers that helped organize Wednesday’s closure of Kentucky’s largest school district said JCPS Leads did not direct teachers to call in absences ahead of Thursday’s closure.

Tim Hill, a teacher at the Academy @ Shawnee, said JCPS Leads decided as a collective what to do. Nearby Oldham County Schools, Bullitt County Public Schools and Meade County Schools canceled school Thursday due to significant teacher absences.

“Obviously, we can’t tell everybody to do it, but we’ll see what the community wants to do,” Hill told WDRB News in a phone interview Wednesday.

Teachers triggered Wednesday’s closure by calling out absent, mostly through sick leave. That left “hundreds of classes that would be uncovered,” JCPS Superintendent Marty Pollio said.

When asked whether he would be at the Capitol on Thursday, Hill said he would “do what the teachers want to do.” He will not call in absent Thursday and, if school hasn’t been canceled, return to his classroom.

“If I wake up in the morning and see that school’s canceled, will I go to Frankfort? Yes I will, but that’s not my call to make,” Hill said. “Like I said before, I enjoy being in my classroom, and I just want to make sure that my kids get what they need.”

The so-called “sick outs” have closed JCPS twice in six days, the first coming Feb. 28 in a protest called by KY 120 Untied against a bill that would dramatically alter how seats on the Kentucky Teachers Retirement System are elected.

That legislation, House Bill 525, has been primed for a floor vote in the House since Monday but hasn’t been called.

Wednesday’s mobilization, as Hill called it, was in opposition to Senate Bill 250, which passed the House Local Government Committee on a 10-6 vote, and House Bill 205, which would allow donors to receive tax credits for donations to groups that award private-school scholarships. SB 250 would expand the JCPS superintendent’s authority over personnel and spending, including principal selection.

“The association is certainly not calling for one, but there may well be one,” Jefferson County Teachers Association President Brent McKim said before JCPS canceled school.

JCTA distanced itself from the action by JCPS teachers Wednesday as well.

Wednesday’s forced closure of JCPS drew swift criticism from Gov. Matt Bevin, who called the action “irresponsible” and said he believes “parents are getting fed up with this” in an interview with 840 WHAS. He placed blame squarely on the Kentucky Education Association and JCTA. KEA President Stephanie Winkler, like McKim, said the statewide group has no involvement with the surprise closure of JCPS.

He also defended HB 205, the scholarship tax credit bill that critics fear could wind up in a tax bill being negotiated by members of the House and Senate. House Majority Floor Leader John “Bam” Carney, the bill’s sponsor, said Tuesday HB 205 did not have enough votes to meet the 60-vote threshold on tax bills.

“This tax credit allows those who have been blessed with resources to be able to give those to someone else to help them use for their child a different alternative, and there are many reasons why that could be,” he said. “Every kid is different. I’ve gone nine of them, I understand this.”

Bevin tweeted that kids “should be in school” after the three districts canceled classes Wednesday evening.

Tomorrow is a school day in Kentucky…

School children should be in school…

“I think it’s important to note that we want our kids in school,” Pollio said.

“Parents are expecting us to serve their kids,” Lewis said. “It’s my sincere hope and prayer that tomorrow Jefferson County is back open for business and kids are in school.”

Unions have heard from many teachers interested in taking leave to advocate in Frankfort, and they hope that could mitigate further “sick outs” by teachers in JCPS and elsewhere. If 150 school districts sent five to 15 teachers each in every day left in the legislative session, McKim said that would give educators a formidable presence without closing schools.

The leave has always been offered, “but in the last several days more and more people have asked” about using it, Winkler said. She’s told those interested to request the leave through superintendents, who have also publicly opposed HB 205.

“Superintendents are more than willing in most cases to send a delegation,” she said. “… If that happens in lots of school districts, we’ll end up with big numbers here. We’re all about keeping schools open if we can.”

Still, McKim noted the difficulty they faced in keeping JCPS teachers from calling out on Thursday.

“From talking to other association leaders across the country, it’s my understanding that it is very difficult when you get into this situation to get, as you say, the genie back in the bottle,” he said.

Jefferson County Board of Education member Chris Brady said as long as the chance that lawmakers could add scholarship tax credits to House Bill 354 in their free conference committee exists, “then there’s always going to be questions as to whether or not we’re going to have these unplanned days off.”

“I think state government needs to get to a point where they are guaranteeing and providing the ability for stakeholders to be heard and listened to on bills rather than them being pushed through at the last minute,” said Brady, who represents District 7 on the school board.

JCTA had said it feared the closure would hurt backing for teachers and public education issues in Frankfort, and McKim said he hasn’t heard or seen the same amount of support as past efforts that closed school districts.

“The support’s not at the level it was when there was a really clear issue, like overriding the governor’s veto for $400 million in funds or people understood that our retirement security was on the line and so forth,” he said.

“There are a number of bills that teachers are concerned about, but I don’t think they are the kind of bills that are sort simple and clear like that and easy for the community to wrap their head around and understand, ‘Yeah, that’s why the teachers are going down there.'”

Hill said JCPS Leads understands some have concerns about the closures, but he said the group “is doing this for the future of our community.”

“We want to make sure that the kids have a fair public education, and I just want to convey that to those that do have a different viewpoint,” he said.