Negotiations between striking Geneva schoolteachers and the Geneva school board will resume Thursday, according to union officials.

The announcement by Geneva Education Association President Kevin Gannon, at a rally outside Geneva High School Wednesday afternoon, drew cheers and applause from strikers, and other supporters.

Pickets chanted “2-4-6-8! What lets us collaborate? Step and lane! Step and lane!” and “Strong teachers! Strong school!” One marcher carried a sign saying “Ho! Ho! Ho! Mark Grosso has to go!” referring to school board President Mark Grosso. Some students served hot cider and doughnuts to the marchers.

Gannon credited pressure from the teachers and the community for getting the board to come to the table earlier. The district had announced Wednesday morning there wouldn’t be new talks until Sunday, as it awaited a response from the union to the proposal the board made during a bargaining session late Monday night.

Gannon urged union members and residents to keep up the pressure, “so we can push this thing to the finish line tomorrow night.”

The strike will enter its third day Thursday.

Teachers went on strike Tuesday after a nearly eight-hour bargaining session that started Monday evening failed to resolve remaining issues with salaries and the structure of raises. The union wants what it calls a “traditional” step-and-lane schedule, where steps are for years of experience and lanes are for graduate-school education attainment.

Grosso and the district’s spokesman could not be reached for comment.

The union represents 465 teachers and other certified personnel, educating more than 5,800 students in the unit district.

Negotiations began in February and the teachers’ last contract expired in August.

With schools closed, extracurricular activities, and sports practices and games have been canceled, including Wednesday’s matches for the girls bowling teams, gymnastics team and underclass basketball teams.

The school board Tuesday released the offer it made to the union Monday night. The proposal says it would provide more than $5.5 million in new money for teacher pay over the life of a proposed four-year contract.

The salary increases offered are: 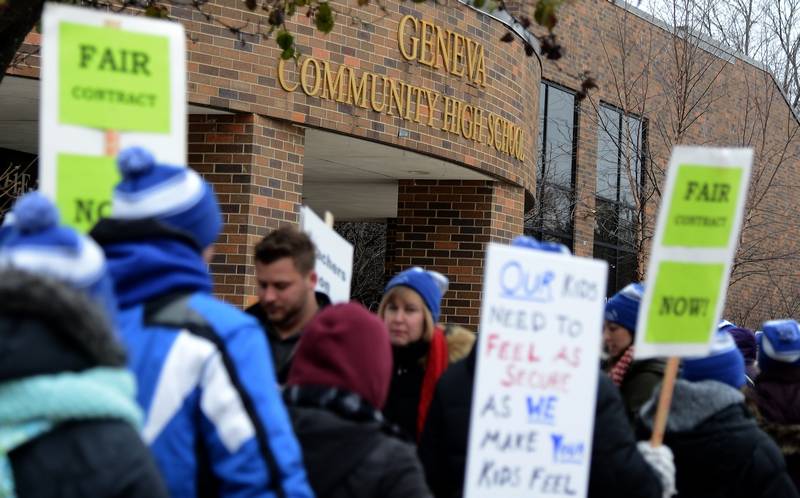 The union tendered a counteroffer Sunday night to one made by the district last week.

The salary increases sought by the union are: