“I need to have that weapon on me at all times in case something would happen,” an Ohio teacher said. “I know the other teachers feel the same way.”

On a recent morning in Newcomerstown, Ohio, a row of teachers stood in a line with guns drawn and moved slowly toward a row of steel plate targets.

As the teachers advanced, bullets pinged off the metal with each round they fired. The teachers had come to take part in Faster Saves Lives, a voluntary training program run by an Ohio-based nonprofit that has taught more than 1,300 school staff members to carry and use firearms since 2013. (Faster stands for Faculty/Administrator Safety Training & Emergency Response.)

“My students are my kids, basically, and I want to be able to protect them just like I would protect my own son,” said a 34-year-old Ohio teacher of students with special needs who participated in the program and spoke on the condition of anonymity out of concern that by going public, she or her school could be targeted by a shooter.

The teacher is one of 400 who will be trained by Faster this year, said Joe Eaton, the program director for Faster. Even before the Parkland shooting in February, classes were filling up within 24 hours. Since then, Eaton has scheduled four extra classes in response to the high demand.

“Schools are realizing they have to have a plan for themselves of how to save lives until the professionals get there,” Eaton said.

As state legislatures and school boards across the country grapple with arming teachers in the wake of recent school shootings, a growing number of districts have sought to train their staff, and Faster’s leaders are in talks to expand their regular trainings into 12 other states beyond Ohio. Despite concerns from insurance companies, gun-control advocates and many teachers who say that arming educators will make schools more dangerous, the number of trained teachers is likely to continue to grow.

Over the past several months, as the toll of school shootings has risen, many districts have either approved of or are considering proposals to arm teachers.

“Even people who say, ‘We don’t want guns in our schools,’ well, when an event happens, you’re calling the police and you’re hoping they bring guns,” said Jim Irvine, president of the Buckeye Firearms Foundation, a pro-gun group that runs the Faster training in Ohio.

Before the February shooting at Marjory Stoneman Douglas High School in Parkland, Florida, 18 states allowed adults to carry weapons on school grounds with the permission of the principal or school board, while dozens of districts allowed teachers to be armed, according to the National Conference of State Legislatures.

After the Parkland shooting, the debate heated up, particularly after President Donald Trump came out in favor of arming teachers. As of last week, at least 17 bills related to arming school staff had been proposed in 10 states over the past four months, according to the National Conference of State Legislatures. Of those, only one bill in Florida has been enacted. Most of the bills have failed, while two remain still pending. 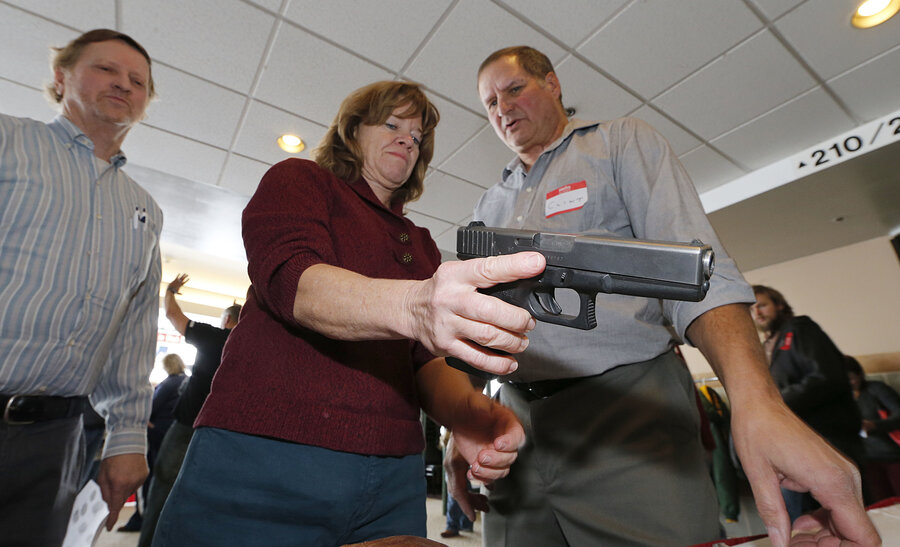 ‘We just have to heal a different way’: Santa Fe, Parkland diverge after school shootings

“We all share a common bond, and that is we want action to prevent another shooting like what happened at Santa Fe High School,” Abbott said at a news conference after a meeting with students, teachers and school officials.

Ohio is one of the states where a teacher can bring a gun to school with the approval of a principal or district. Some districts, like Sidney City School District in the western part of the state, requires firearms to be kept locked in biometric safes, until they are needed in an emergency. The Ohio special needs teacher who completed the Faster program this spring said she’s hoping she’ll be able to carry a gun with her as she moves from classroom to classroom throughout the school day.

“I need to have that weapon on me at all times in case something would happen,” she said. “I know the other teachers feel the same way.”

Not all teachers agree. In a letter to Trump after the Parkland shooting, Randi Weingarten, president of the American Federation of Teachers, said America’s classrooms are no place for guns.

“Teachers don’t want to be armed, we want to teach,” Weingarten wrote. “We don’t want to be, and would never have the expertise needed to be, sharp shooters; no amount of training can prepare an armed teacher to go up against an AR-15.'”

Some experts are skeptical about the value of arming teachers and say it could distract students.

Adam Winkler, a professor at the UCLA School of Law who specializes in the Second Amendment and gun control, said he believes that bringing guns into the classroom “will have a severe impact on learning,” but will not have any effect on the number of mass shootings.

“There is no evidence to show that arming teachers will see a reduction of mass shootings — we’ve seen them occur on campuses where there are armed security personnel,” Winkler said, adding that he hoped there was not an increase in accidental school shootings.

Even states that have allowed teachers to have firearms on campus have run into hurdles.

In Kansas, a 2013 law allows school staff members to be armed after the Sandy Hook shooting, but no public school employee has brought a gun to school because the insurance company that covers most school districts in the state said it would not insure schools that allowed staff to carry concealed handguns.

“It is a situation where legislators who didn’t know anything about insurance are making rules that won’t work,” Kansas state Sen. Lynn Rogers, who opposed the law, previously told NBC News.

In some Ohio districts, uniformed and armed officers cost $100,000 per person to insure, according to The New York Times. It is unclear what it will cost to insure trained teachers.

But Irvine, who runs the group that oversees Faster, said he believes this is the only way forward to protect school children.

“We protect things of value with armed security,” he said, “and our children are our most precious resource.”