Every two years, education-policy wonks gear up for what has become a time-honored ritual: the release of the Nation’s Report Card. Officially known as the National Assessment of Educational Progress, or NAEP, the data reflect the results of reading and math tests administered to a sample of students across the country. Experts generally consider the tests rigorous and highly reliable—and the scores basically stagnant.

Math scores have been flat since 2009 and reading scores since 1998, with just a third or so of students performing at a level the NAEP defines as “proficient.” Performance gaps between lower-income students and their more affluent peers, among other demographic discrepancies, have remained stubbornly wide.

Among the likely culprits for the stalled progress in math scores: a misalignment between what the NAEP tests and what state standards require teachers to cover at specific grade levels. But what’s the reason for the utter lack of progress in reading scores?

On Tuesday, a panel of experts in Washington, D.C., convened by the federally appointed officials who oversee the NAEP concluded that the root of the problem is the way schools teach reading. The current instructional approach, they agreed, is based on assumptions about how children learn that have been disproven by research over the last several decades—research that the education world has largely failed to heed.

The long-standing view has been that the first several years of elementary school should be devoted to basic reading skills. History, science, and the arts can wait. After all, the argument goes, if kids haven’t learned to read—a task that is theoretically accomplished by third grade—how will they be able to gain knowledge about those subjects through their own reading?

The federal No Child Left Behind legislation, enacted in 2001, only intensified the focus on reading. The statute required states to administer annual reading and math tests to students in grades three through eight and once in high school, and attached hefty consequences if schools failed to boost scores. The law that replaced No Child Left Behind—the Every Student Succeeds Act, enacted in 2015—has eased the consequences but has hardly weakened the emphasis on testing.

What is tested, some educators say, gets taught—and what isn’t doesn’t. Since 2001, the curriculum in many elementary schools has narrowed to little more than a steady diet of reading and math. And when test scores fail to rise after third grade—as they often do, especially in high-poverty schools—subjects like history and science may continue to be relegated to the far back burner through middle school.

To some extent, it does make sense to focus on reading skills in the early years. One component of reading is, like math, primarily a set of skills: the part that involves decoding, or making connections between sounds and the letters that represent them.

But educators have also treated the other component of reading—comprehension—as a set of skills, when in fact it depends primarily on what readers already know. In countries that specify the content to be taught at each grade level, standardized tests can test students on what they’ve learned in school. But in the United States, where schools are all teaching different content, test designers give students passages on a variety of topics that may have nothing to do with what they’ve learned in school—life in the Arctic, for example, or the disappearance of Amelia Earhart. The tests then ask questions designed to assess comprehension: What’s the main idea of the passage? What inferences can you make?

On a daily basis, teachers have their students practice skills and strategies like “finding the main idea” or “making inferences.” And teachers select books that match the given skill rather than because of the text’s content. Rarely do the topics connect: Students might read a book about bridges one day, zebras the next, and clouds the day after that.

Cognitive scientists have known for decades that simply mastering comprehension skills doesn’t ensure a young student will be able to apply them to whatever texts they’re confronted with on standardized tests and in their studies later in life.

One of those cognitive scientists spoke on the Tuesday panel: Daniel Willingham, a psychology professor at the University of Virginia who writes about the science behind reading comprehension. Willingham explained that whether or not readers understand a text depends far more on how much background knowledge and vocabulary they have relating to the topic than on how much they’ve practiced comprehension skills. That’s because writers leave out a lot of information that they assume readers will know. If they put all the information in, their writing would be tedious.

But if readers can’t supply the missing information, they have a hard time making sense of the text. If students arrive at high school without knowing who won the Civil War they’ll have a hard time understanding a textbook passage about Reconstruction.

Students from less educated families are usually the ones who are most handicapped by gaps in knowledge. Another panelist—Ian Rowe, who heads a network of charter schools serving low-income students in New York—provided a real-life example during his remarks. A sixth-grader at one of his schools was frustrated that a passage on a reading test she’d taken kept repeating a word she didn’t understand: roog-bye. The unfamiliar word made it hard for her to understand the passage. When Rowe asked her to spell the word, it turned out to be rugby.

The implication is clear. The best way to boost students’ reading comprehension is to expand their knowledge and vocabulary by teaching them history, science, literature, and the arts, using curricula that that guide kids through a logical sequence from one year to the next: for example, Native Americans and Columbus in kindergarten; the colonial era and the American Revolution in first grade; the War of 1812 and the Civil War in second grade, and so on. That approach enables children to make sense of what they’re learning, and the repetition of concepts and vocabulary in different contexts makes it more likely they’ll retain information. Not to mention that learning content like this can be a lot more engaging for both students and teachers than the endless practice of illusory skills. 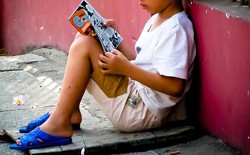 Another panelist—Timothy Shanahan, an emeritus professor at the University of Illinois and the author or editor of over 200 publications on literacy—went on to debunk a popular approach that goes hand in hand with teaching comprehension skills: To help students practice their “skills,” teachers give them texts at their supposed individual reading levels rather than the level of the grade they’re in.
According to Shanahan, no evidence backs up that practice. In fact, Shanahan said, recent research indicates that students actually learn more from reading texts that are considered too difficult for them—in other words, those with more than a handful of words and concepts a student doesn’t understand. What struggling students need is guidance from a teacher in how to make sense of texts designed for kids at their respective grade levels—the kinds of texts those kids may otherwise see only on standardized tests, when they have to grapple with them on their own.

That view was endorsed by Marilyn Jager Adams, a cognitive and developmental psychologist who is a visiting scholar at Brown University. “Giving children easier texts when they’re weaker readers,” she said during the panel discussion, “serves to deny them the very language and information they need to catch up and move on.”

The failure to build children’s knowledge in elementary school helps explain the gap between the reading scores of students from wealthier families and those of their lower-income peers—a gap that has been expanding. More affluent students may not learn much in elementary school, but compared to their disadvantaged peers their parents tend to be more educated and have the money to provide knowledge-boosting perks like tutoring and trips to Europe. As a result, those wealthy children are far more likely to acquire knowledge outside of school. Poorer kids with less-educated parents tend to rely on school to acquire the kind of knowledge that is needed to succeed academically—and because their schools often focus exclusively on reading and math, in an effort to raise low test scores, they’re less likely to acquire it there.

The bottom line is that policymakers and advocates who have pushed for more testing in part as a way to narrow the gap between rich and poor have undermined their own efforts. They have created a system that incentivizes teachers to withhold the very thing that could accomplish both objectives: knowledge. All students suffer under this system, but the neediest suffer the most.

The NAEP is a valuable educational barometer, but it’s important to understand that while standardized tests can identify a problem, they can’t provide the answer to it.

While some elementary teachers have embraced the approach advocated by the NAEP panel, it’s clear that most have been trained to in methods that aren’t supported by research, and that many are resistant to change. The University of Illinois’s Shanahan noted that when he speaks to teachers around the country, they’re aghast at the idea of giving struggling readers grade-level books—even when their state’s literacy standards call for doing so.

Still, schools in some parts of the country are embracing the kinds of insights offered by the panelists. Louisiana has not only created its own curriculum but has also asked the federal government for permission to give tests based on that curriculum rather than passages on a variety of randomly selected topics. If that movement spreads, the National Assessment of Educational Progress may finally live up to its name and the American education system may at last be able to unlock the untold potential of millions of students.