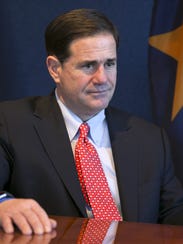 The Republican governor of a western state faces an education crisis.

Public schools can’t hire enough teachers. Their salaries rank near the bottom nationally. And the Legislature of his state, which has long prided itself on low taxes, is controlled by Republicans.

But it’s the situation that confronted Nevada Gov. Brian Sandoval in 2015.

Push for a tax increase — coupled with reforms favored by conservatives in his party — that has so far funneled roughly $500 million in new money into the Silver State’s education system.

The extra cash has gone to teacher recruitment and pay increases, literacy programs and school improvements.

Some Arizona teachers, whose salaries are among the nation’s lowest, have taken note, leaving for jobs in Nevada, where teacher pay now averages $10,000 more a year.

Dave Henneman said he and his wife, Sandra are among them.

The Hennemans received a nearly 41 percent raise when the moved in 2016 from Lake Havasu City to a Las Vegas suburb to teach.

“We were living paycheck to paycheck and trying to decide which bills we would pay and which ones could wait for two weeks until the next paycheck,” he said.

Teachers leaving for nearby states

Arizona saw the number of educators leaving for similar jobs in neighboring states increase significantly between 2014 to 2016, U.S. Census data compiled by The Arizona Republic show. (Data for 2017 and 2018 is not yet available.)

About 730 Arizona educators left each year for California, Colorado, Nevada or New Mexico, a nearly 37 percent increase from the number (534) who left for education jobs in neighboring states during the eight preceding years, the Census data show.

At least 87 of the educators who left during fiscal 2016 went to Nevada.

The figure is small relative to Arizona’s 50,000 teachers in traditional K-12 schools and 10,000 in charter schools. But the 87 departures were the most of any year in a decade and nearly triple from fiscal 2010, when just 31 educators left, Census records show.

The federal government does not have a precise job breakdown of the individuals who left. A majority are elementary and high school teachers, but the figure also includes university and college professors, along with trade instructors.

Kevin McCarthy, president of the Arizona Tax Research Association and a finance expert, said it’s evident that market forces are causing Arizona teachers to leave while many districts cannot fill their teaching vacancies.

Yet, McCarthy contends, things in Arizona are not as bad as some may make them seem.

His organization conducted a study that found Arizona teachers rank 40th in pay, when cost-of-living adjustments are factored in. And, McCarthy said, K-12 education did not sustain the severe cuts many state agencies have experienced since the Great Recession.

‘Nevada only had one direction to go’

Aiming to win support from more conservative Republicans, Sandoval linked his call for a tax increase to sweeping education reforms, including funneling money to families with children in private school.

Passage of the bill required a two-thirds majority of the Nevada Legislature, which was achieved after Sandoval’s staff put on a “full-court-press” lobbying effort.

Under Sandoval’s budgets, Nevada teachers received a 1 percent raise in 2016 and a 2 percent pay hike in 2017.

“The governor has put most of his eggs into education funding,” said Greg Bortolin, a Nevada Department of Education spokesman. “Nevada only had one direction to go, and it was up. He was very justified in putting funding and other initiatives into education.”

Sandoval, who is in the final year of his second term, appears to have benefited politically. Recent polling ranked him among the nation’s most popular governors, with a 61 percent approval rating.

Efforts to reach Sandoval were unsuccessful.

Teachers will continue to push for better salaries and working conditions, he said.

“You can’t fund public education with a series of Band-Aids. It just doesn’t work,” Murillo said. “The governor had to address it, and we were thankful he did. Arizona could learn some things from Nevada.”

Could it happen here?

Arizona Gov. Doug Ducey has not shown interest in raising taxes for education, noting teachers in 2017 saw a 4.3 percent increase in pay from 2016, following passage of Proposition 123 and additional state funds.

Ducey, a Republican, and the GOP-controlled Legislature last year approved a 1 percent stipend for teachers. His proposed budget this year calls for a 1 percent pay increase that would go into teachers’ base pay.

Teachers have rallied at the Capitol and picketed during a Ducey radio show appearance to demand more money. They note the Prop 123 money resulted from a settlement on money the Legislature already owed them.

Arizona Educators United, a grass-roots group, and the Arizona Education Association recently issued demands and want to negotiate with Ducey and lawmakers. Among their requests: a 20 percent raise, which could cost about $680 million.

Some Arizona teachers have threatened to strike, like their counterparts in West Virginia, Kentucky and Oklahoma, where lawmakers raised taxes to increase education funding.

McCarthy said his organization — which bills itself as an advocate for taxpayers — would not be opposed to a tax increase to fund better teacher pay. However, any additional money would need to come with the requirement that it be equally distributed throughout the state to address pay disparities among school districts, he said.

Meanwhile, a coalition of business interests friendly to Ducey has spent more than $1 million on TV ads touting progress in Arizona public schools.

“What if I told you there’s a state that has increased education funding by nearly $1.5 billion in the last three years,” one of the ads states.

Dave Henneman said he understands the frustrations of his former Arizona colleagues.

The couple, who are in their mid-40s, said they each earned about $34,000 a year teaching in Lake Havasu City.

He and his wife moved to Henderson, Nevada, in summer 2016.

“We loved living in Arizona. But we had to find somewhere where we could at least make a livable wage without going into debt,” he said. “I have a lot of friends who are still there (Lake Havasu City), and going into debt is one of their options.

The Hennemans were able to buy a house after they moved to Nevada, and they can afford to pay for their youngest son to participate in club baseball, he said.

He said he knows of other educators who have left Lake Havasu City for jobs in Nevada because of the higher pay.

“If you treat teachers like third-class citizens with low pay and more expectations with all the demands of testing, you will get a lot of teachers who say, ‘I’ve had enough,’ like my wife and I did,” Henneman said.

Reach the reporter at craig.harris@arizonarepublic.com or 602-444-8478 or on Twitter @charrisazrep.