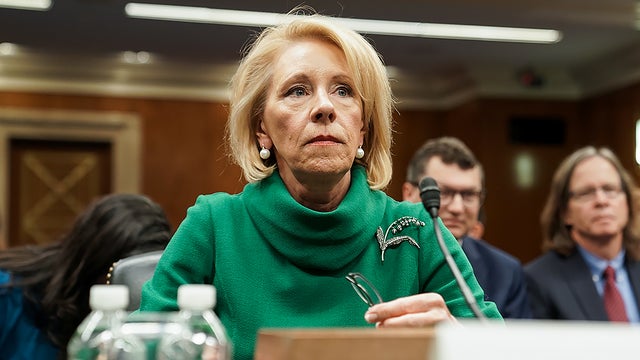 Education Secretary Betsy DeVos issued guidance to the country’s school districts on how they should allocate funds received from Congress’s $2 trillion CARES Act, telling the districts that they should increase the amount of money given to private schools.

The New York Times, which published a story about the DeVos guidance on Friday, reported that language included in House Democrats’ latest coronavirus stimulus bill would hamstring DeVos’s ability to allocate the additional $58 billion in the proposal for K-12 schools to private institutions.

The Hill has reached out to the Education Department for comment.

The CARES Act, signed into law by President Trump in late March, created the Education Stabilization Fund, a multibillion dollar package aimed at aiding schools around the country that had been thrown into financial disarray by the coronavirus pandemic. The fund earmarked a total of $30.75 billion to schools — roughly $14 billion for higher education and $13.2 billion for elementary and secondary education, with the rest, about $2.9 billion, going to nation’s governors.

Per federal education law, when a school district receives federal funding for its poorest students, it is required to fund “equitable services,” such as transportation and tutoring, for low-income students that attend private schools within the district.

Allocation of the $13.2 billion set aside for elementary and secondary education from the CARES Act worked in the same way, meaning school districts with a higher percentage of low-income students received more money. However, the guidance from DeVos shifted how much of this money private schools could receive.

Instead of funding based on how many low-income students private schools have, the allocation method was changed to base funds off of the total percentage of students in the district that private schools educate, regardless of their income level.

The secretary’s guidance has been met with pushback from states and districts facing large budget shortfalls due to the pandemic.

The Council of Chief State School Officers sent DeVos a letter on May 5, asking for clarification on the guidance.

“The effect would be that non-public schools would receive an inequitable amount of funding, much more federal support than Congress intended, or [local educational agencies] anticipated based upon the CARES statute,” it said.

In its letter, the group cites that nonpublic schools in Louisiana would receive “at least 267% more funding under the Department’s suggested approach than they would if [U.S. Education Department] were to interpret equitable services as required under CARES.”

“In Orleans Parish, Louisiana, at least 77% of its CARES formula allocation would be directed to non-public schools in the area,” it added.

David Sciarra, the executive director of the Education Law Center, wrote New Jersey Gov. Phil Murphy (D) to reject the guidance, saying that Newark Public Schools — the largest school district in the state — would lose $800,000 in emergency funding under the guidance.

“IN will distribute funds according to Congressional intent and a plain reading of the law,” she said. “I will not play political agenda games with COVID relief funds. Our most at-risk students depend on this commitment.”

Critics of DeVos believe that her new guidance is the latest scheme in the secretary’s long-running crusade for private schools and school choice.

Additionally, she has received flak for setting aside $349 million — 2.5 percent of Higher Education Emergency Relief money — to “address the greatest unmet needs related to the coronavirus, giving priority to schools that have not been allocated at least $500,000 from the fund.”

The department has said that its goal with this is to “ensure that every eligible public and private nonprofit institution will receive at least $500,000 in CARES Act relief funding,” but many have questioned if the money is going to where it is needed the most. Specifically, small colleges have received large influxes of aid, despite their tiny enrollments.

Inside Higher Ed cited that Massachusetts’s Conway School of Landscape Design is now expected to receive $493,308 in aid from the CARES Act. With an enrollment of 18 students for the 2017-18 academic year, that comes out to more than $27,000 per student.

By comparison, New Orleans–based Delgado Community College received $11.3 million in funding from the stimulus package. However, with more than 20,000 students for 2017–18 academic year, the institution received only $550 per student, according to Inside Higher Ed.