On the third day of the teacher’s strike, hundreds of teachers and families rallied and marched through Union City to the school district office, where the board held a meeting Wednesday night.

UNION CITY, Calif. (KGO) — It may be a teacher’s strike, but it’s deeply affecting the students in Union City.

Most students have stayed home from school this week.

Of the 14% of students in the district, who did show up to school Wednesday, parents and students said they did things like watch movies and color.

Wiping tears away, a fifth grade New Haven Unified student, whose father is a teacher in the district, pleaded with the school board to end the strike.

“This has been hard on my family and on everyone,” he said. “Give these teachers what they deserve, what all of us deserve.”

On the third day of the teacher’s strike, hundreds of teachers and families rallied and marched through Union City to the school district office, where the board held a meeting Wednesday night.

Teachers and parents lined up at the microphone to spew vitriol at the school board.

“I’ve never respected a New Haven School Board less,” said one longtime parent in the district. 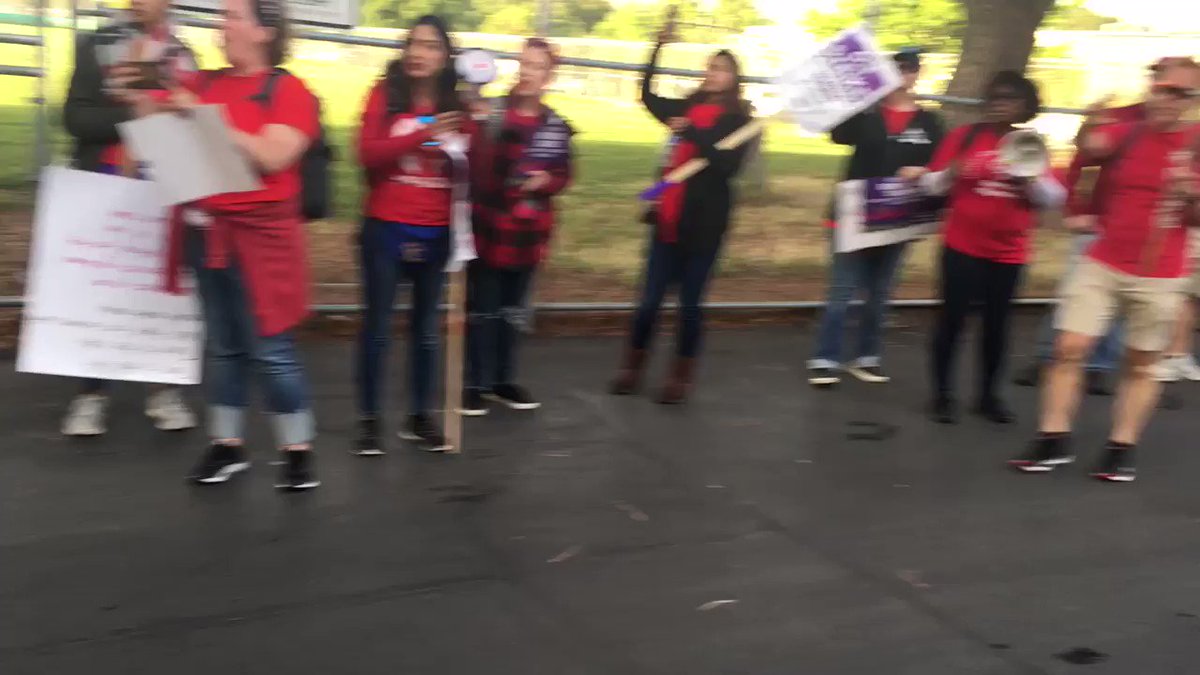 Union City police showed up to escort members of the New Haven Unified School Board out of a contentious meeting, during stalled contract negotiations with the teachers union over wages.

Most of the school board got up and left the meeting, except for one member, Sarabjit Kaur Cheema, who stayed until 9 p.m., listening to public comment.

“Its very sad, but the problem is not at the local school level, the problem is the legislature at the state level,” explained Cheema, who said that she is hopeful the district and teachers union can move forward and negotiate successfully.

The New Haven Teachers Association wants a 10% raise over two years — 5% this year and 5% next year.

The district is offering 1% next year, with a possible 3% bonus.

The district argues that their teachers are among the highest paid in the state, which the teachers dispute, because they pay for their own medical costs out of pocket.

“Enough is enough, it has to change and this is the power of the strike,” chanted Joe Ku’e Angeles into a megaphone. Angeles is a school counselor and president of the local teachers union, New Haven Teachers Association.

Besides wages, the union would also like smaller class sizes.

“We’ve always been hopeful that we can get them to change their mind or understand,” said Angeles.

The union and district are meeting again Thursday morning, and if that goes well, they may start up official negotiations again Thursday afternoon, but the strike will continue through the end of the week.

Angeles says he’s hopeful they will come to an agreement with the district and get back to school next Tuesday, after Memorial Day. 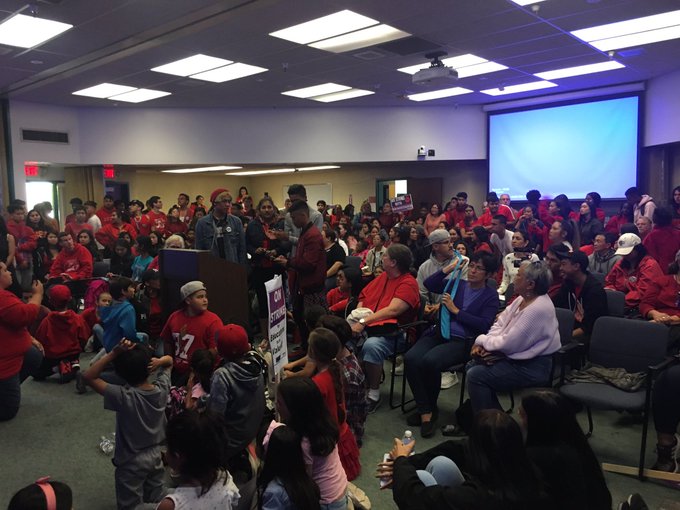 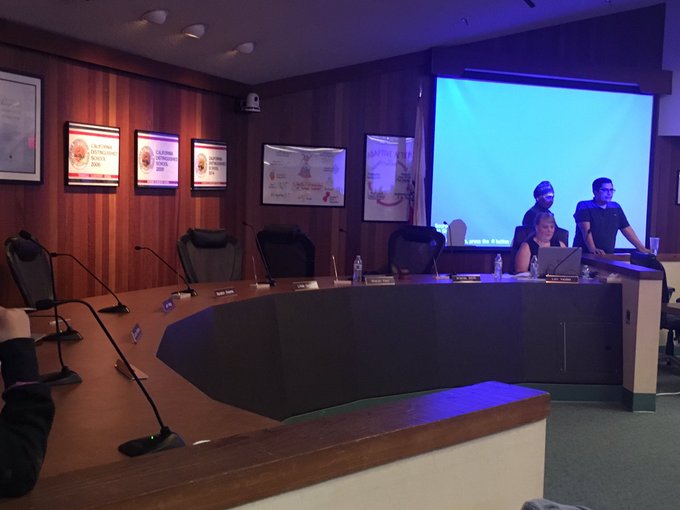 In front of a packed and passionate crowd of teachers and families, most of the New Haven Unified Board of Education just walked out of a board meeting…. amid major complaints during public comment, about the teachers strike and failed negotiations. 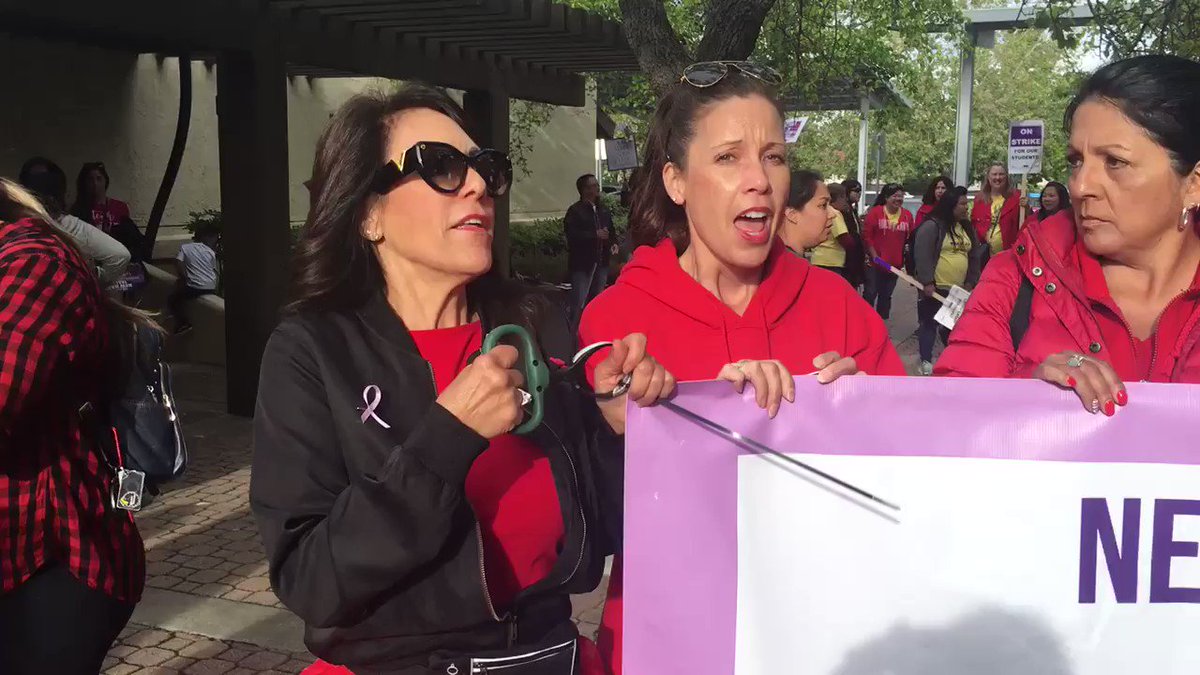 Hundreds of teachers, parents and students are rallying at the New Haven Unified School District Board meeting. The teachers have been on strike this week, while negotiations with the district over wages have stalled.