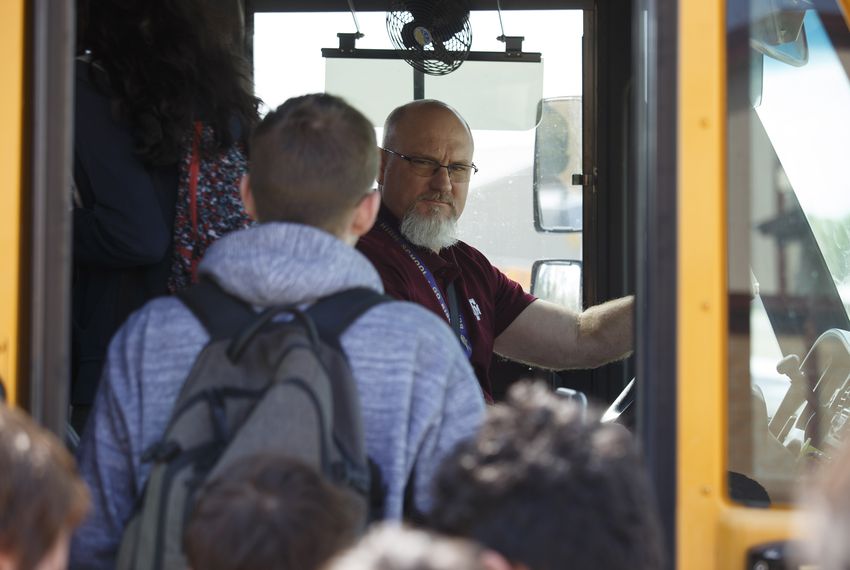 BUFFALO — If you’re not from Buffalo, Texas, you probably won’t end up there.

That’s how Greg Kennedy sees it from his vantage point as junior high principal in a building that used to be his high school and was his uncle’s high school before that. Once bustling with eager oil field workers, the sparsely populated town halfway between Houston and Dallas counts Buffalo Independent School District as one of its main employers.

But filling open positions at the upper junior high school is a Herculean task. Kennedy takes pride in the intimate atmosphere of his small community, where the students “sir” and “ma’am” their teachers, many of the staff members are literally family, and the small eighth grade basketball team means everyone gets a turn. But he’s under no illusion that many others will see it that way.

“If I’m from Bryan-College Station, they’re going to pay $15,000 more to teach,” he said. “It’s much easier if you’re homegrown or family or something’s here to bring you here.”

He finds that the outsiders who can be convinced to move to Buffalo are likely “just starting out or they’re getting away from something.” A few years ago, he posted a theater arts teaching position on several job boards and waited awhile without any bites. The woman who finally took the job came from Houston and had no experience teaching theater.

As state lawmakers finish deliberating whether and how to give teachers and other school employees pay raises this fall, Buffalo’s educators want more money to recruit talented teachers and raise the starting salary from well below the state average, to end a longstanding employment drought.

But solving the problem entirely could require something closer to a miracle. Even if lawmakers boost education funding this spring, Buffalo ISD’s competitors will also have more money to spend on bonuses and raises, making it challenging for the tiny district to come out on top.

For a total of three hours each morning and afternoon, Buffalo ISD Superintendent Lacy Freeman drives a school bus along a state highway flanked by verdant sweetgum and oak trees because he’s struggled to find licensed bus drivers — a predicament not uncommon in rural Texas districts.

So everyone pitches in. The assistant superintendent drives an afternoon route, Kennedy drives a morning route and coaches fill in the gaps when they’re needed. Last year, the woman who sponsors the cheer team also drove one of the bus routes before she quit to make more money in a different industry.

Left: A call for bus drivers for the elementary school has gone unanswered for years in Buffalo. Right: A Buffalo ISD school bus on a morning route. Michael Stravato for The Texas Tribune

The bus driver with the longest route is retiring at the end of the year, and that worries Freeman. He’s advertised in the local newspaper and put up signs around town but has attracted no responses. “Zero. Zero. Zero.”

Bald and bearded, with a gruff monotone and a face that’s often difficult to read, Freeman has been in Buffalo 15 years and was previously an assistant principal at Houston-area Katy ISD, which has 80 times the number of students as Buffalo ISD. He was born an hour away in Lovelady, an East Texas town that’s even smaller than Buffalo, and decided he wanted to give his three children the same tight-knit experience.

In Katy, Freeman recalls setting up at a job fair and being rewarded by a long line of candidates clamoring to fill the openings. The line is “much, much shorter” now for Buffalo ISD.

Most of the teachers and staff in Buffalo have grown up there or are married to a native. Trena Bing, who teaches eighth grade at the upper junior high school, took a $10,000 pay cut when she moved back from El Paso more than 10 years ago to be with family after a divorce.

She knows well that her employer will likely always “fall short of big cities” like El Paso when it comes to salary, even if she appreciates the smaller class sizes and proximity to family.

The largest town in Leon County, Buffalo has seen its population swell and shrink over the last century, tied in part to a volatile oil and natural gas industry. Its barren downtown is surrounded by stretches of field; the town is home to fewer than 2,000 people.

The latest upswing in drilling, in the early 2000s, diversified the community, drawing Hispanic immigrants in search of employment who stayed even after the boom moved on to South and West Texas. The number of Hispanic students attending Buffalo schools has more than doubled since 2003, as has the number of students who need additional help learning English.

With bilingual teaching positions being especially challenging to fill, administrators are counting on being able to “grow their own,” encouraging Spanish-speaking students to graduate, get their teaching certificates and choose to return as certified bilingual teachers. At least one is already in the process.

Their other employment options in Buffalo include working on construction projects in the region or “growing” chickens that get transferred to poultry processing plants in Waco and Palestine. Some fathers of Buffalo ISD children travel to the oil fields on the opposite side of the state in Midland or Odessa, staying for weeks at a time before returning to their families.

Freeman seems an even-tempered guy, but he gets energized when defending the value of his adopted home.

Raises could be coming

One Friday in March, Erin Pickens was knocked off her feet by a particularly active virus that had taken out a good chunk of her fellow teachers, keeping her from teaching math to a small group of fourth graders at Buffalo Lower Junior High.

But a shortage of substitute teachers limited her options. So she was relieved when Wendy Stanton, a fourth grade teacher’s aide who knows the curriculum well, was available to “step right in for me and take over.”

Stanton is one of three instructional paraprofessionals in the school who substitute for flu-stricken teachers and help students one-on-one in the classroom — not including the librarian or the nurse, who fills in when there’s a need and everyone else is busy.

Stanton and her husband moved to Buffalo from Cypress, a Houston-area suburb, to be back in his hometown. Without his salary — he oversees several construction sites in the region— she would have to pick up another job or find one that paid more, forfeiting the ability to pick up her daughter after school.

The average base pay for an educational aide at Buffalo ISD hovers just above $15,000. The median income in Buffalo is around $44,000.

“It is hard to make ends meet now,” she said.

Last August, after returning from summer vacation, Pickens and Stanton both received retention bonuses, a reward for districtwide improvements in standardized test scores the previous spring. Buffalo ISD has a merit pay program, unusual for a tiny, rural district, which it uses to reward all nonadministrative school employees when students score higher on their state tests from year to year. The district performs relatively well and received a B on its latest state rating.

“We feel it has produced positive results. It conveys to the staff that there is growth, that we have to work with our students struggling at the bottom, but we also have to push our kids who are doing well,” Freeman said.

Full-time teachers got $850 last August, and noncertified staff like Stanton received $425. Although the bonus is a symbol of gratitude that employees choose to come back, it’s not enough to make a big difference for those struggling to pay bills. And experts on merit pay programs say that small bonuses aren’t likely to dramatically change teacher behavior or affect academic performance.

“I never think about it, honestly, until the next school year comes around,” Pickens said.

In February, Freeman drove to Austin to address Texas House lawmakers to support changes to how schools and teachers get funded.

“A lot of employees, by the time their [Teacher Retirement System] health insurance is taken out … I’m not sure how they make it,” he told committee members. “They’re literally working for insurance.”

And he explained the harsh reality of a rural superintendent: It’s hard to convince a 20-something recent graduate to uproot his or her life for a grueling job in an isolated town for an average salary for a beginning teacher that, according to state data, is $15,000 less than the state average.

Lawmakers are considering funding a statewide merit pay program, providing money for bonuses and giving school districts flexibility to decide how to rate their teachers. (That proposal has been roundly criticized, mainly by teachers associations and unions, for its potential to increase the stakes tied to the controversial state test.)

And pay raises are still on the table, with the state Senate wanting to hand out $5,000 raises to all full-time teachers and classroom librarians — leaving out all other school employees such as teachers’ aides, counselors and nurses. House lawmakers instead want districts to set aside some money to use on smaller raises for all school employees, while giving superintendents like Freeman leeway on how to spend additional money.

A committee of lawmakers from both chambers is now working to come to a compromise, holding great power over whether Texas teachers and aides will be able to pay their bills come the fall.

Preparing to continue his indefinite run as a part-time bus driver, Freeman is crossing his fingers for an agreement that will allow him to pay everyone more and offer stipends to recruit new talent. Meandering the halls of the high school, he proudly pointed out glass cases of academic and sports trophies, in between greeting students and teachers rushing between classes.

“We try to provide opportunities for our kids to be able to go out and compete with kids from anywhere in the state of Texas,” he said. “In a small district, that’s more challenging.”