With one week left in the legislative session, Indiana teachers are looking at lawmakers to do more.

They want more money for schools.

And they want it now.

Scott-Stewart was one of more than 250 teachers and public school supporters at the Statehouse on Tuesday. They met with lawmakers, watched over last-minute lawmaking and then they made noise.

Chants of “red for ed,” the name of an education movement that swept across the country over the past year, could be heard in the Senate chamber during afternoon debate coming from an education rally being held in an atrium one floor below.

We help hold the powerful accountable.: But we need you, too.

Tuesday’s event was considerably smaller than one held on a Saturday last month, but the turnout was better than what organizers were expecting for an afternoon on a school day. 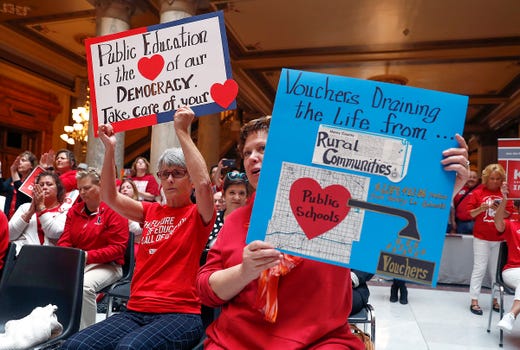 The turnout of elected officials was considerably better — more than a dozen turned up. Wearing red to match the crowd, one lawmaker after another took the mic, saying the things that teachers want to hear.

Sen. Vaneta Becker, an Evansville Republican, said education policy has never been about politics for her.

“It’s about what I think is best for kids and students,” she said.

And a dozen of the House Democrats stood on stage together, each taking a turn whipping up the crowd.

“Teachers, I stand with you,” shouted Rep. Carey Hamilton, of Indianapolis.

But will it make a difference? The power brokers at the Statehouse have so far seem unmoved by calls for better teacher pay and more school funding. 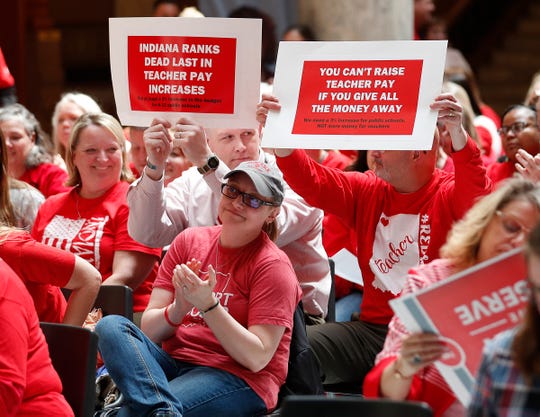 Buy PhotoHundreds of supports turned out for the Indiana Coalition for Public Education and their partners rally in support of better funding for K-12 education at the Indiana Statehouse on Tuesday, April 16, 2019.  (Photo: Matt Kryger/IndyStar)

Earlier in the day, the Senate passed a budget that would spend $14.9 billion on schools over the next two years. The Senate’s proposal calls for the largest increases in education spending — a 2.7 percent increase in 2020 and another 2.2 percent increase in 2021 — of the three versions presented this session. Gov. Eric Holcomb’s budget called for an annual increase of 2 percent, and the House’s budget called for slightly more.

All three fall short of the 3 percent annual increase that the Indiana Department of Education, teachers unions and other school groups had requested.

Brad Bennett, a physical education teacher in Western School Corporation, said more than half of the teachers in his region are prepared to walk out.

“To get someone who went into the teaching profession, who is a very caring and nurturing person by nature, to be ready to walk off the job for what is right and for what is right for their kids … it’s a massive statement,” Bennett said.

Bills have been passed that would set benchmarks for what percentage of their funding school districts spend in the classroom and make part of the collective bargaining process public, but no money has been earmarked to raise salaries. Most teachers could see a bonus from a state grant program, but proposals to raise pay by 5 percent or boost starting pay to $40,000 have failed.

The state’s top education official has lobbied on the behalf of teachers, too, but has made little progress on the pay issue.

“We can’t do this if we ignore pay,” said Jennifer McCormick, state superintendent of public instruction.

Channeling the frustration of the crowd at her feet, McCormick called out lawmakers on their budget proposals, a pared back school safety bill and a  reversal on a provision that would have prohibited teachers from being shot with plastic pellets in active shooter training.

“We’ve got to be better than that,” she said to raucous applause and a standing ovation.

At the outset of the legislative session, the Indiana State Teachers Association and other education-minded groups were praising the Republican majority for making teacher pay a priority.

At the halfway point, that rhetoric had started to change.

By Tuesday, it looked to have turned entirely. 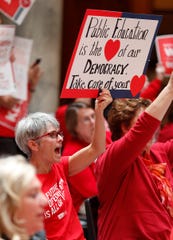 Buy PhotoHundreds of supports turned out for the Indiana Coalition for Public Education and their partners rally in support of better funding for K-12 education at the Indiana Statehouse on Tuesday, April 16, 2019.  (Photo: Matt Kryger/IndyStar)

Teresa Meredith, ISTA president, said the progress that’s been made isn’t enough. The state organization isn’t yet ready to call for a walkout but, she said, the number of teachers who are ready to do so is growing.

Districts across the state are holding “walk-ins” this week and next, meeting before school for a short rally and walking into the building as a group at their contracted start time. ISTA is encouraging those events and urging teachers to reach out to lawmakers in the final days of session.

Meredith said she’s waiting to see what the final budget deal will include for schools and teachers. Those details will be hammered out in the coming days among a group of lawmakers from both chambers.

Indiana is hardly the first state to see teachers speaking out, calling on lawmakers for things like better pay, more education funding and smaller class sizes.

Arizona, Oklahoma and West Virginia, where teachers have taken action, have some of the lowest average teacher salaries in the nation.

A recent study found Indiana was behind all surrounding states in average teacher pay and that it would take an investment of $658 million to bring it in line with the median pay of its neighbors.

Meredith said that teacher pay and school funding still need to be addressed this session because, ultimately, students are the ones who suffer.