Skip to content
One-day strike set for Thursday
Mike Luery
SACRAMENTO, Calif. (KCRA) —Up to 2,300 teachers are poised to walk out of Sacramento City Unified School District schools Thursday for a scheduled strike.

Tens of thousands of students and parents are caught in the middle of a bitter dispute.

Picket signs were stacked and ready to go Wednesday at union headquarters, where Sacramento teachers told KCRA 3 they are ready to strike.

The teachers union accuses the district of mismanaging millions of dollars in health care savings.

“And all that money was supposed to go to further lower class sizes and improve special education,” said Nikki Milevsky, 1st vice president with the Sacramento City Teachers Association.

Milevsky added the health care savings were intended for “school psychologists and nurses at our sites and do early intervention. And our district has created a budget fiasco.” 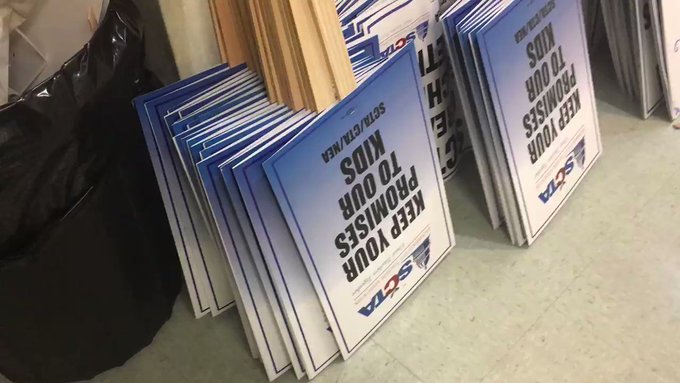 Sacramento City Teachers saythey are prepared to strike tomorrow. We’ll show you why tonight at 4.

But the Sacramento City Unified School District warns that the education of some 42,000 students will be in jeopardy if the budget crisis is not addressed now.

“We have a $35 million deficit,” said Alex Barrios, communications officer for SCUSD. “We are on the brink of insolvency and state takeover. So our priority is to save our schools from a state takeover.”

Parents like Julianna Moore said they are concerned. She told KCRA 3 she’ll be sending her child to school tomorrow, as usual.

“We just want our children to get a good education,” Moore said.

“We want the teachers that enjoy being there to continue being there,” Moore added. “I support them in their strike, and I understand why they are doing it. However, I hope that we can resolve this shortly and have our teachers back in the classroom.”

Just a year and a half ago, teachers and district officials cheered the new contract at City Hall in a deal brokered by Mayor Darrell Steinberg. But the Sacramento mayor is not part of the current negotiations.

“The union I think was unhappy with me,” Steinberg said.

Steinberg, a longtime supporter of teachers, told KCRA 3 he believed union leaders were wrong to ask for an investigation of District Superintendent Jorge Aguilar. Instead, he said, the fighting could end with a three-part solution.

“More administrative cuts,” Steinberg said. “More program cuts. And using those health savings to reduce the deficit and, ultimately, to invest back in the schools when they can find other savings.”

In the meantime, schools will be open districtwide Thursday but with replacement teachers inside the classroom and regular teachers on the picket line.

Teachers are expected to picket at three schools tomorrow before rallying with parents at district headquarters at noon.