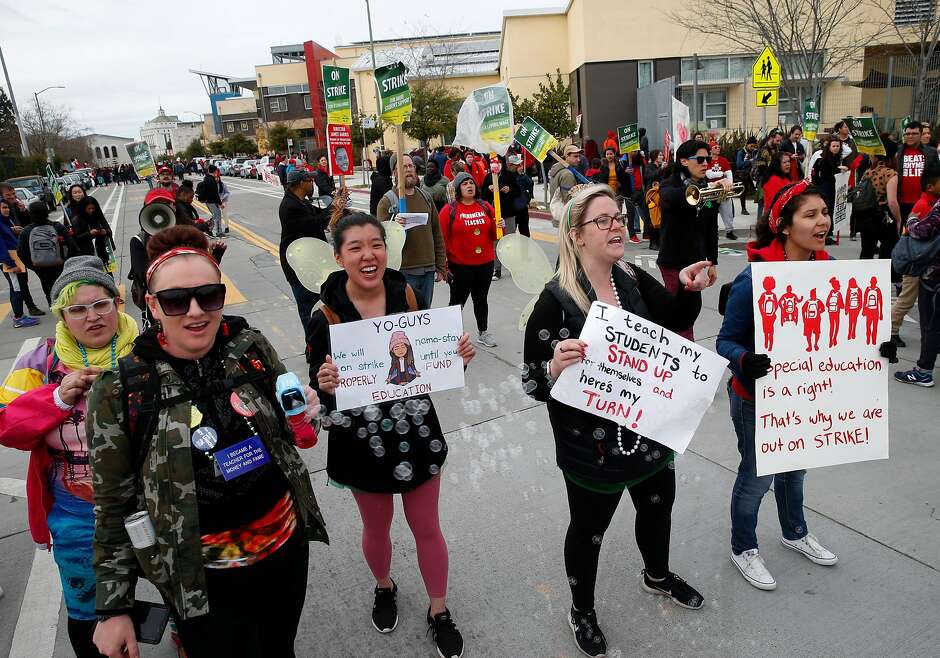 Teachers in Oakland are back in the classrooms, but tension in the district is still thick.

The seven-day strike that ended Sunday got the union’s 3,000 teachers better pay, but many of them think their union should have fought harder, for more.

The district, meanwhile, has a financial mess on its hands. At a school board meeting Monday, the board slashed $21.75 million from its budget.

Students weren’t happy about that. Some, who showed up at the meeting, made passionate pleas opposing the cuts while others simply shouted at board members.

At the very least, the board was able to hold that meeting — a step forward that some might say was really a step backward.

Last week, teachers shut down two scheduled board meetings by holding demonstrations outside the elementary school, La Escuelita on Second Ave., where the meeting was planned. During the second shutdown, on Friday, the atmosphere outside La Escuelita grew hostile and, some say, violent.

In a video clip shared widely on social media, Jumoke Hinton-Hodge, a school board member for 10 years, is seen in the middle of a mob outside the school with her hand apparently on the throat of a woman who’s been identified as a teacher. Hinton-Hodge didn’t respond to my requests for comment, but in a statement she said that as she tried to enter the school she was pushed to the ground and became “briefly disoriented.” As she got up, she “was inadvertently pushing up against a teacher’s neck.”

Whether you believe her story or not, Hinton-Hodge is an elected official. If you don’t like the job she’s done for a decade, don’t physically push her. Push others to vote against her.

Another board member, Jody London, was already inside the school. She had to stay several hours after the meeting was canceled. She couldn’t leave because protestors had barricaded the entrances, even locking some doors with chains.

“Whatever the circumstances were, it was definitely distressing for everyone involved,” said London, who left the building around 6 p.m. with people jeering at her as she walked with crutches. “It did not feel safe. It felt very hostile.”

Teachers, who made opposition to the budget cuts part of their campaign to win support during the strike, were just holding their ground, they said. In an email sent to members Friday morning, the union, teachers said, requested that they picket the board meeting, writing that the budget cuts “can not be done in our name.”

That’s why Lara Trale, a teacher at Oakland High School, said she and others held the line. The union told them to back off after the tentative deal was struck later that day, but teachers didn’t budge.

“It just seemed super messed up that we would allow the board to make these cuts that we had, repeatedly, insisted as a union that we were not OK with,” she said.

Some teachers feel the union didn’t push hard enough at the bargaining table. Shannon Carey, a teacher at MetWest High School, said she voted for the contract because she felt the strike was losing its momentum.

I’d heard teachers were staying home instead of picketing. And some were concerned that teachers might’ve crossed the picket line this week if a deal hadn’t been made.

“For us to end when we were strong and when we were united and when we had the full backing of the community means that we can take that energy and take it to the state,” Carey said. “We can’t squeeze any more money from the stone that is OUSD right now.

“We have to now look for more robust funding sources.”

He wanted to look at the bright side.

“The strike is a first step in this fight to improve public education, because for years our students have been disenfranchised,” Brown said.

My colleague Jill Tucker reported that the district faces a $9 million deficit this year, $6 million next year and $15.7 million the following year, according to an independent analysis by the Fiscal Crisis and Management Assistance Team.

So, there’s a lot of healing that needs to be done in a district already hobbled by decades of dysfunction and financial mismanagement.