Thousands of educators march in Raleigh and demand respect On Wednesday May 16, 2018, the opening day of the legislative session, educators and their supporters from across the state traveled to Raleigh to demand more funding for public education.

Public school teachers should get a 9.1 percent raise over the next two years, North Carolina Gov. Roy Cooper said Tuesday when he unveiled highlights of the education portion of his budget proposals.

Cooper said his plan would put North Carolina on pace to become the highest-paying state for teachers in the Southeast.

“North Carolina ranks 37th in teacher pay, and that’s not good enough,” Cooper said in a press release. “We need to put our schools first, and that starts with paying teachers and principals better and treating them like the professionals they are.”

The governor does not get to make budget decisions in North Carolina, but Cooper can advise the state legislature on how to spend and he can veto the budgets they pass. Cooper’s announcement Tuesday comes as the legislature is in the early stages of its own budget discussions, with a plan of passing budgets for the next two fiscal years by this summer.

On the same day Cooper unveiled his education proposals, Republican Senate leader Phil Berger issued a statement outlining past Republican efforts to raise teacher salaries. Republicans took control of the state legislature in 2011, and teacher salaries fell until 2014, when they began rising again. 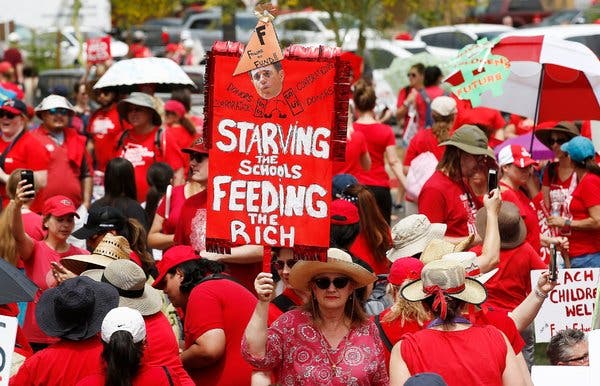 “The average base salary for a teacher in North Carolina increased by $8,700, or nearly 20 percent, since the 2014 school year,” Berger said, adding that legislative staff believe the average teacher in the 2018-19 school year is making about $53,700 including supplements from local districts. That’s after a 6.5 percent raise last year.

So far, Cooper has only released the education part of his budget proposals. More details on other parts of state government will be announced Wednesday.

Cooper, a Democrat, said that teachers should once more be paid extra for having a master’s degree or other advanced degree — which the Republican-led legislature phased out several years ago — and that teachers should no longer have to pay to hire their substitute for when they take a day off work.

But the biggest part of his plan is the 9.1 percent raise, which Cooper said would be spread over the next two years and wouldn’t leave any teacher with less than a 3 percent raise. That’s a boost to veteran teachers, who have complained of being left out of recent raises that largely went to those with less experience.

After years of declining teacher pay after the Great Recession, under first Democratic and then Republican control of the state legislature, Republican lawmakers gave North Carolina teachers a raise in the 2014-15 school year that was the largest in the country. More raises have followed since then, especially on the lower end of the pay scale for newer teachers.

In an interview earlier this year about the upcoming budget debates, a Wake County teacher told the News & Observer that many of her colleagues with more experience than her have felt left out of the recent raises.

“I think that some of our most experienced educators feel like they have been disrespected by the more recent salary structures,” Jasmine Lauer, a Pine Hollow Middle School teacher, told the N&O. “And I think it’s understandable, right? If you see pay raises at the bottom — which are warranted and needed — but not at the top, then it starts to say, ‘Is my experience valuable? Am I being valued for the knowledge that I have amassed over all these years of teaching?’”

Raises weren’t the only topic Cooper raised in his budget proposal Tuesday.

He reiterated support for a bond referendum, which would let voters in 2020 choose whether to approve $3.1 billion in construction funds for new K-12, community college and university buildings.

The bond would total $3.9 billion, including $800 million for non-school expenses like water and sewer upgrades for cities around the state.

Last week Moore took the rare step of personally sponsoring the bill, HB 241, that would put the referendum on the ballot.

And in December, the News & Observer reported, Moore said the bond was needed to help the state “build on historic commitments to our schools with another long-term investment in capital construction for our rapidly growing student population.”

▪ $40 million to hire more nurses, psychologists and other support staff at schools.

▪ $29 million for textbooks, supplies and more.