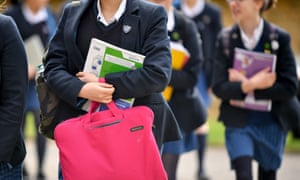 Three-quarters of teachers frequently have to deal with disruptive behaviour in school and many have considered quitting as a result, a survey has suggested.

Almost two thirds of teachers are considering or have previously thought about leaving the profession, while 71% said would-be teachers are being put off by concerns around poor pupil behaviour, the Policy Exchange thinktank said.

More than half of those asked said they believed the quality of children’s education was affected by disrupted lessons, and 45% said they did not feel their initial training had prepared them to manage pupil behaviour.

Report author Dr Joanna Williams said the findings showed there was an appetite among teachers, parents and students for a tougher approach, but added that, rather than bringing in new policies, those already in place need to be more consistently applied.

Among its recommendations the paper, called It Just Grinds You Down, said higher standards of behaviour should be required for schools to achieve good or better Ofsted ratings, and that staff should have refreshers in behaviour-management policies.

It said: “In order for pupil behaviour to improve further, what is needed now are not more government directives from the Department for Education but for more diligent and consistent enforcement of existing school-behaviour policies.

“We need a cultural shift where high standards of behaviour are assumed to be the norm and, for teachers, discussing behaviour management is considered a professional responsibility, rather than a source of failure.

“Our research shows that parents, pupils and teachers all want a school environment in which all pupils are expected to behave, are challenged and sanctioned when they do not.”

It also recommended schools have a clear policy that either bans mobile phones, which it said can contribute to low-level disruption, or restricts their use to certain times in the school day.

“Since 2010, we have taken decisive action to empower teachers to tackle poor behaviour, and many schools are already leading the way in tackling persistent disruption.

“As these important findings from Policy Exchange show, we now need all schools to follow the lead of the best-performing, so that we can build on the rising standards in our schools.

“To help school leaders make that happen, we have pledged £10 million for schools to share best practice on behaviour management, so that teachers can focus on the most important task – teaching.”