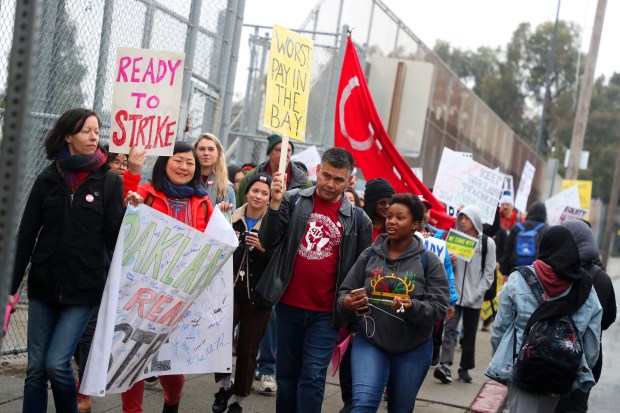 A group of teachers in Oakland, Calif., participated in a one-day strike on Monday to protest low wages.

The teachers’ strike was not organized by their union, the Oakland Education Association, which educators told KQED has been ineffective at negotiating with the school district.

“Now is the time for this movement to happen, and the union is moving too slow,” said Alex Webster Guiney, a special education teacher, told the outlet. “They need to be supporting the grass-roots movement of their members.”

KQED reported that teachers have been working at the Oakland Unified School District without contracts since July while they have been negotiating pay raises.

Teachers rejected the district’s offer for a 5 percent raise over five years, pushing instead for 12 percent over three years.

Oakland Unified School District teachers are among some of the lowest paid in the San Francisco Bay Area, with the average beginning salary estimated around $46,411, according to EdSource.org.

Cole Margen, a history teacher, said the cost of living in Oakland on a teacher’s salary could negatively impact students.

“We should be paid enough to live in the communities that we teach in, and if we leave it hurts the students,” Margen said.

Oakland high school teachers striking were also joined by roughly two dozen educators from nearby Oakland’s Madison Park Academy and Fremont High School.The teachers notified the district in advance of the strike. Science teacher Suzi LeBaron also told the outlet that she explained the strike to her students.

“I think every teacher here today has been very upfront with their students about where the exact issues are,” she said. “My senior class and I looked at comparative salaries of the different districts around the area and they were horrified. What we are doing today is a form of teaching. We are showing our students through our example what you can do when somebody is not treating you fairly.”

A USA Today/Ipsos poll released in September found that 66 percent of Americans say that public school teachers have the right to strike for issues such as higher pay, better school funding and stronger benefits.