This is the largest pay increase in the history of Miami-Dade County Public Schools, according to a teachers union

Miami-Dade County Public Schools and a teachers union have reached a tentative agreement Tuesday on the upcoming school year’s pay raises and the distribution of funds generated by a voter-approved property tax raise.

Referendum 362 passed Nov. 8 with 71 percent of voters’ approval. It would raise the average Miami-Dade homeowner’s tax bill by about $142, raising $232 million per year for teachers’ pay raises and bolstering school security.

“From security and clerical to our paraprofessionals, subs and teachers, both seasoned and new, not a single person in our bargaining unit was left behind in this effort,” said Karla Hernandez Mats, the president of the United Teachers of Dade.

The funds will go into effect on Jan. 1, 2019 with a 5 percent increase, and then increases for full-time instructional staff will range from 12.5 to 22.75 percent beginning in July 2019, according to the UTD.

The pay increase, which is reportedly the largest raise in the history of Miami-Dade County Public Schools, will be determined by base pay and other factors.

Additionally, there will be an additional 1 percent increase retroactive to July 2018, and employees should not see a rise in healthcare premiums.

“We look forward to presenting it to our bargaining unit and getting it signed, sealed and delivered before heading out for the holiday season,” Mats said.

Superintendent Alberto Carvalho called the referendum’s passing a “huge victory” at the time of its approval and says the boost will push the teacher salary average to somewhere above the national average. 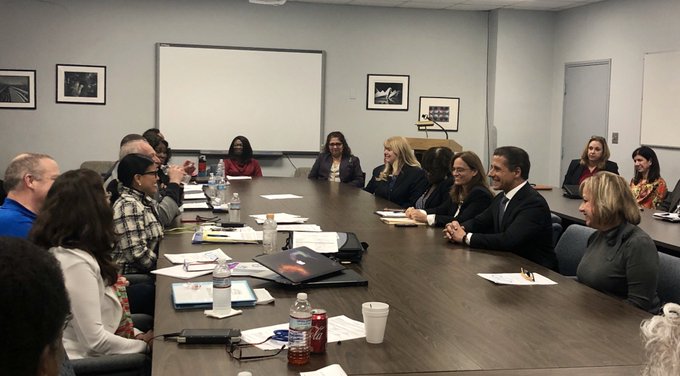 Today’s historic agreement with @UTD_AFT1974 honors what the people voted for, addresses the needs of mid-career teachers, and ensures @MDCPS’ ability to recruit and retain the highest quality teachers. #SecureOurFuture