Marshall Tuck held a lead of 1.2 percent over Tony Thurmond with 93 percent of the vote counted Wednesday morning in a race still to close to call for  California’s state superintendent of public instruction.

Tuck led, with 50.6 percent to Thurmond’s 49.4 percent – a margin of 74,000 voter out of nearly 6 million counted. The race tightened overnight as the Los Angeles County results came in. Thurmond took the county  by 10 percentage points, a larger margin than he won in the primary. But one third of the vote remains to be counted in several counties where Tuck is doing well, including San Diego and Riverside counties

Tuck, 45, was the first president of Green Dot Public Schools, a charter schools network in Los Angeles, and then led the Partnership for Los Angeles Schools, a nonprofit organization created to improve performance at some of the lowest-performing schools in Los Angeles Unified.

Thurmond, 50, is a two-term state assemblyman from Richmond who previously served on the Richmond City Council and the West Contra Costa Unified school board. A social worker by training, he ran several Bay Area nonprofits serving young people before running for office.

Both are Democrats for this non-partisan office.   They are vying to succeed Superintendent Tom Torlakson, who will be termed out after serving two four-year terms.

Tuck narrowly  led Thurmond in voting updates throughout the evening. The close vote came at the end of a campaign spending spree that could double the previous combined spending record of $30 million set in Tuck’s unsuccessful run for the job four years ago, when he lost to Torlakson.

In June, Tuck narrowly beat Thurmond 37 percent to 35.6 percent in a four-person  primary; the 1.4 percent victory is about the same lead that he now holds.  Tuck won big in rural and Republican counties: Kern, San Bernadino, Orange and San Diego, while Thurmond trounced Tuck in the Bay Area and won by 7 percentage points in Los Angeles.

The same pattern appeared to be holding through early results on Tuesday. An exception  was Sacramento County, which Tuck flipped, winning by 3.6  percentage points last night with nearly all votes counted,  after losing the county by the same margin in June.

Thurmond struck an optimistic tone as he took the stage around 10 p.m. at the Impact Hub in downtown Oakland, but warned his supporters to be ready for a long night.

“This is a referendum on public education, and we are fighting for the soul of public education,”  Thurmond told a crowd of several hundred supporters, many of them teachers and union members.

Several supporters at the event described the race as offering a choice that could shape the future of California education — between charter school interests, represented by Tuck, and more traditional public schools, backed by Thurmond.

Tuck hosted his election watch party at his home in Los Angeles. Among the hundred or so at the event was real estate developer Bill Bloomfield, who was the largest donor to the independent expenditure committee formed to back Tuck’s campaign. Throughout the night, cheers among the 100 or so guests punctuated the room whenever Tuck’s lead over Thurmond inched up a decimal of a percentage point, though others paused and scrutinized the Los Angeles County returns.

“We knew L.A. County would be tough for a number of reasons but we’re hopeful we can get close — either win by a little bit, tie, or or lose by a little bit,” Tuck said. “I’ve done my work in Watts and East L.A. and South L.A.”

Marco Petruzzi, former president and CEO of Green Dot Public Schools, responded to a question about the impact of outside spending on the race from wealthy donors. “I think you have people who have been very successful in life who want to give back to low-income students who have not had access to a good education,” he said. “And somehow they’re the evil people. I don’t get it.”

More than 80 percent of the spending in the campaign came from independent expenditure committees, which by law are not allowed to coordinate their activities with the candidates.  Labor organizations were the principal contributors to independent committees backing Thurmond, while wealthy supporters of charter schools and reforms in teacher work rules and tenure provided most of the financial support to outside committees backing Tuck.

Both sides produced radio and TV ads, some of which  distorted and misrepresented the other candidate’s positions and resumé. PolitiFact, a Washington-based  nonpartisan fact-checking  organization, concluded ads on both sides were false (here and here).

But interviews of with some voters outside polling booths in Oakland and San Diego on election day indicated that negative ads claiming that Tuck was an ally of President Trump and U.S. Education Secretary Betsy DeVos may have had an impact. 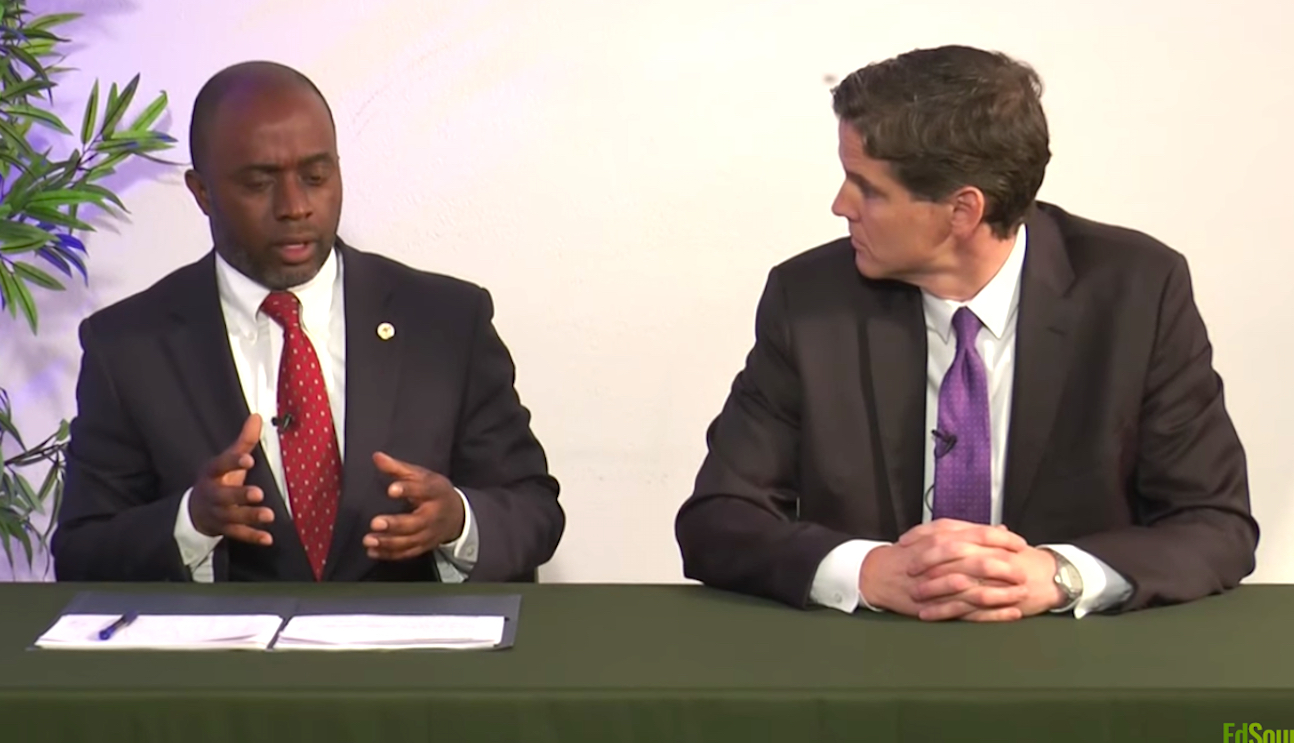 Differences Between Marshall Tuck And Tony Thurmond Are Real, As Are Areas Of Agreement

Marcus Glover, a 25-year-old law school student, said his vote for Thurmond was a vote against DeVos. “Anyone trying to defund education is not right for America,” said Glover outside a polling station in downtown San Diego.

Outside the Bella Vista Elementary School polling station in Oakland, Mey Saechao said she was voting for Thurmond, because “he just has a more progressive agenda, and mainly because the other opponent is being funded by Trump.”

Ads by Tuck’s supporters, which falsely asserted that the Obama administrated reprimanded West Contra County Unified for incidents of student sexual assault and harassment while Thurmond was a school board member, could also have affected the outcome. They ran repeatedly in a big  TV markets.

In January whoever wins will take over an office with limited powers to set education policy, which is the shared responsibility of the governor, Legislature and State Board of Education.  But it offers a potentially powerful bully pulpit to influence education in the state, as an independent voice and as chief executive of the 2,500-person California Department of Education.

Though outspent more than 2-to-1 by Tuck and independent committees, Thurmond benefited from on-the-ground support from labor unions and the state Democratic Party. In the closing weeks, Thurmond held rallies organized by the California Teachers Association and campaigned with prominent Democrats, including U.S. Sen. Kamala Harris, in swing congressional districts expecting a massive voter turnout.

During the campaign, Tuck and Thurmond agreed on more issues than they disagreed on.

They both supported the sweeping changes in K-12 schools that Gov. Jerry Brown and the state board have set in motion: creation of a new funding formula, a shift from state to district control, new standards, tests and a new system of accountability.

Both favored more funding for schools and more weeding out of poorly performing charter schools. Both have children in public schools – Tuck with a son in a Los Angeles Unified school, and Thurmond with two daughters in West Contra Costa Unified schools.

But a few differences alarmed teachers unions and charter school backers. Their high-voltage spending in the campaign may signal tough fights ahead — under a new governor — over funding transparency and the future of charter schools in the state.

Thurmond favored a “pause” in approving charter schools statewide to consider their negative financial impact on school districts; Tuck opposed that idea. Tuck opposed allowing money targeted for low-income students and English learners to be used for across-the-board teacher raises – a key issue for the California Teachers Association. Thurmond disagrees. Tuck also spoke out in support of the Vergara lawsuit that challenged the state’s teacher tenure, layoff and dismissal laws.