Voters rejected Amendment 73, which would have raised money for Colorado’s public schools by increasing income, corporate and property taxes.

“I think that voters were crystal clear, and I think our message was crystal clear that simply adding more money to the same system is not the solution, that money isn’t necessarily the problem that’s facing Colorado schools,” Ragland said.

What Was At Stake

Amendment 73 would have raised $1.6 billion for Colorado’s public schools. The measure has three prongs: an income tax hike on wealthier Coloradans, a bump in the corporate tax rate, and a change to property taxes.

A combination of Colorado’s state tax laws, including the TABOR and Gallagher amendments, and a cumulative state budget shortfall to public schools of $7.4 billion dollars has left many schools operating at 2008 funding levels. That’s at the same time educators say student needs are higher and districts faced new academic standards, new tests and a new teacher evaluation law. 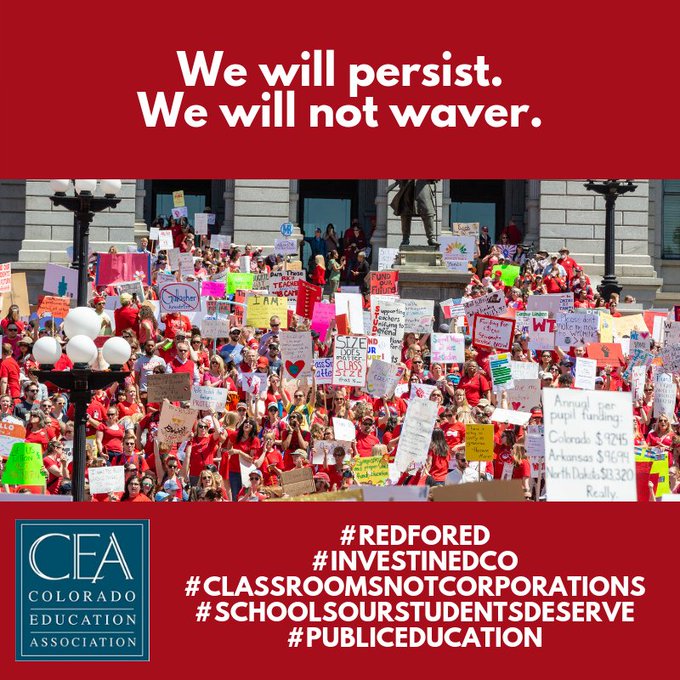 Tonight voters rejected #Amendment73. Despite this, we will forge ahead & hold our elected officials accountable. We will fight every day. Our students deserve better. https://bddy.me/2SOIejU  #RedForEd #InVESTinEdCO #SchoolFunding #edcolo #copolitics

Proponents were energized by springtime rallies by teachers at the state Capitol. They pointed to Colorado’s below-average per pupil spending, low teachers’ salaries, large class sizes, and the fact that more than half of districts are on four-day weeks. While many teachers said they didn’t like politics or getting politically engaged they felt they had no choice. The spring walkouts raised public awareness about working conditions, like schools with asbestos, bathrooms without stall doors, overcrowded classes, and students with mental health needs who aren’t being helped.

Opponents argued Amendment 73 would hurt the economy and wealthy Coloradans would leave the state because they would have to pay more taxes.  Groups like the Denver Metro Chamber didn’t support Amendment 73 because it said it would hurt small businesses that make more than $500,000 in income.

Other groups said they wanted to see academic goals like higher graduation rates or lower remediation rates in college spelled out in the amendment.

Revenues from the tax increase would go into a newly created Quality Public Education Fund. Amendment 73 specifies where a little more than half of the new revenue goes, until any legislature adopts a new public finance law. It adds new money but also makes up for money lost to schools over the past decade.

Base per pupil funding is increased from $6,769 to $7,300 per student, a 7.8 percent increase (that would bring Colorado closer to the national average in per pupil funding); funding for full day Kindergarten (right now districts get funding for a little more than half a day); special education funding increases by $120 million, gifted and talented programs by $10 million, English language proficiency programs by $20 million, and preschool programs by $10 million. The reason there are bumps in funding to those groups of students is that currently, the state only gives districts a small portion of what it costs to educate them. The increase in funding would erase the annual state budget shortfall to schools.

The rest of revenue would be divvied up between school districts. For example, Durango school district would get about $8 million more, while Denver gets about $150 million. Districts have discretion over how to spend it and many passed resolutions indicating their top priorities. Raising teachers’ salaries, more mental health supports, lowering class sizes, and restoring programs cut during the recession are among them.

Colorado Public Radio reserves the right to use the comments we receive, in whole or in part, and to use the commenter’s name and location, in any medium. By commenting below, you agree to these terms. For additional information, please consult our Privacy Policy & Terms of Use as well as our Community Standards.