BY MICHAEL B. JEFFERSON

There was good back-to-school news for Baltimore students and families in the work session held last week in Annapolis by the Commission on Innovation and Excellence in Education, better known as the Kirwan Commission.

Under the recommendations of the panel’s working group, pre-K would become much more accessible to three and four year olds and teachers would get a 10% raise.

Statewide, there would be more Family Support Centers and Early Childhood Resource Centers known as “Judy Centers” (named after the late Judy Hoyer, an educator and the wife of Maryland Rep. Steny Hoyer).

AN IMPORTANT UNRESOLVED QUESTION BEFORE THE PANEL: HOW TO CHANGE YEARS OF SCHOOL FUNDING INEQUITY.

The discussion offered one of the most substantive indications yet of where education spending is most likely to increase once the commission completes its work.

But until the group completes its most politically sensitive task – updating the funding formula to correct years of school funding inequity – there will be little clarity on the question of “winners and losers” under Kirwan.

The commission was originally scheduled to deliver its final list of recommendations to the General Assembly last December. But it got an extension to continue deliberations and is expected to share its final policy report, including cost estimates, after the November general election.

Chaired by William E. “Brit” Kirwan, the retired University of Maryland chancellor, the commission is tasked with overhauling the funding formula established in 2002 by the Thornton Commission under the Bridge to Excellence Act.

The panel also is charged with making recommendations to improve student outcomes across the state.

The goal, according to Kirwan, is to “enable Maryland to develop a school system that performs for the benefit of the State and its students at the level of the best-performing systems in the world.”

MARYLAND CURRENTLY IS THE 15TH MOST REGRESSIVE STATE IN TERMS OF HOW IT DISTRIBUTES FUNDING TO STUDENTS IN NEED.

Throughout its deliberations, the Kirwan Commission has consistently noted that students with greater need should receive additional support from the state. Maryland currently is the 15th most regressive state in terms of how it distributes funding to students in need.

According to the commission’s preliminary report, Maryland “spends 4.9% less money (state and local) on poor school districts than on wealthy ones.” By contrast, Massachusetts, the highest ranked state for education, spends 7.3% more money on students in low-income districts.

Under the commission’s preliminary report, schools with large numbers of low-income students, English language learners and students with disabilities would receive extra weight in the funding formula as would schools with high concentrations of students living in poverty.

This could have a significant impact on school districts in Baltimore City and Prince George’s County where the majority of students are eligible for free and reduced price lunch.

However, a change to the funding formula could also stir political controversy if the commission recommends that the state diminish aid to affluent districts that it considers capable of using more local funds on their schools.

It remains unclear how exactly the commission will change the current funding formula.

If a new formula is adopted, the commission’s recommendations would be the first major overhaul of Maryland education policies in over 15 years and could shape school funding formulas for a decade or more.

“To truly deliver on our overall mission to make sure that we have a world-class education system,” Rice said, “we knew that meant we need to have a very strong and robust early childhood education model – a pre-K model that made sure we are opening up opportunities to all children.”

The plan outlined in the work group’s report would:

• Expand full-day (6.5 hour minimum) pre-K at no cost for three and four year olds from families with incomes up to 300% of the federal poverty level – or roughly $75,000 for a family of four.

• Offer pre-K to four year olds from families with income between 300% and 600% of the poverty level using a sliding scale to incentivize higher-income families to utilize the service while reducing the total cost to the state.

• Specify that counties that already provide pre-K services to all children would be reimbursed.

The current recommendations would increase access to pre-K over 10 years. 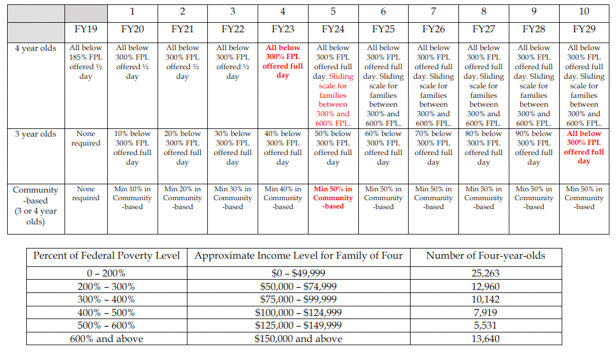 The working group’s report also sets the goal of increasing the number of Judy Centers and Family Support Centers throughout Maryland over 10 years, with priority in opening centers in the areas of highest need.

There are currently 54 centers, with one or more located in each jurisdiction, and more than 300 Title I elementary schools.

The report also notes that there are nine counties – Calvert, Charles, Garrett, Harford, Howard, St. Mary’s, Somerset, Wicomico and Worcester – that do not have any Family Support Centers.

According to the plan, the Maryland State Department of Education would open 30 new Family Support Centers to serve these areas over 10 years.

Also advanced at the meeting was a plan to raise teacher salaries by 10% in Maryland and to increase training requirement to enter the profession.

“It includes major changes to the teaching profession,” Pinsky added.

The current plan would increase teacher salaries by 10% across the state over the first three years of implementation to match average salaries of teachers in Massachusetts and New Jersey. Additional salary raises would continue to be negotiated collectively at the local level.

In addition to salary increases, Pinsky said the plan would increase the rigor of teacher training for state certification. All teacher training programs under the proposal would be required to offer a full year of practicum so prospective teachers experience an entire school year.

This would apply to alternative training programs too, such as Teach for America which contributes a significant portion of new teachers every year to Baltimore City.

Under the current plan, alternative routes to teaching programs would be required to offer 100 practicum hours in year one of the plan’s implementation and a full year of practicum training by year five of implementation.

Pinsky added that he hoped the plan would ultimately reduce the state’s dependence on alternative route programs, while improving the reputation of the teaching profession with salaries more comparable to other professions with similar education requirements such as accounting and registered nurses.