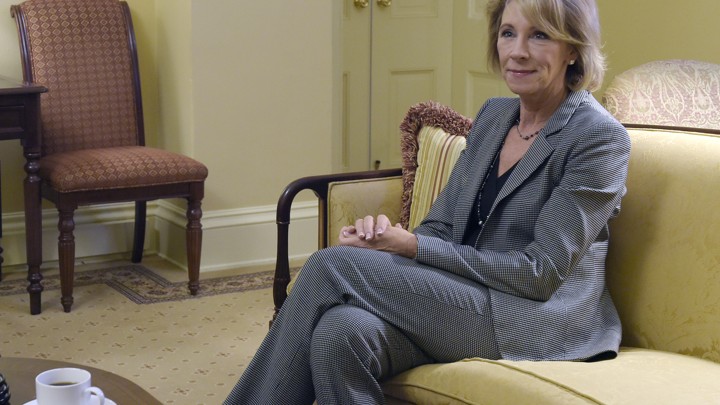 Prepare to hear “school choice” a lot. Here’s what it actually means.

The Trump administration could bring to the fore some education terms that have been largely overlooked in recent years as it moves to dramatically change the way students learn in the United States. And officials and advocacy groups will throw around other words that are commonly heard but not always thoroughly understood. As Congress prepares to decide whether President-elect Donald Trump’s pick for education secretary, Betsy DeVos, is fit for the job, it’s worth reviewing what some of the words and phrases that will be floating around in the coming days and months actually mean:

School choice: Trump and DeVos have repeatedly said they are fans of school choice. It’s a phrase that backers of charter schools (see that definition below) often use to avoid the more contentious “charter” wording. Broadly, proponents of school choice say they want students to be able to attend whatever school they and their families decide is best, whether it’s the traditional public school down the street or a charter across town. Sometimes, people also argue that school choice means parents should be able to use taxpayer dollars to send their kids to private schools, too.

Proponents say vouchers create a competitive environment that allows students to get the best education possible; the idea is that poorly performing schools will work to improve the education they deliver to avoid losing students and the funding they come with. But opponents say vouchers pull money away from public schools without reducing costs, and that students from families who do not take advantage of vouchers could suffer as their peers depart for private schools. Opponents also raise concerns about vouchers funding religious education, which is something DeVos supports.

Education Savings Accounts: Commonly referred to as ESAs, education savings accounts give families state money to spend as they see fit (within parameters, which vary by state). Unlike vouchers, which are specifically to pay for private or parochial school, these accounts let parents pay for private school, as well as things like tutoring or transportation to and from school. Like vouchers, some states restrict access to certain students, such as children with disabilities or Native American students who live on reservations. The way states distribute the money varies, with some giving families their allotment (how they calculate that allotment also varies) upfront and others doling it out in pieces. As with vouchers, proponents argue the accounts increase competition and, subsequently, the quality of offerings, while opponents voice concerns about whether families are using the money wisely. Attempts to expand them have generated considerable controversy, perhaps most publicly in Nevada.

Charter Schools: This term has obviously been on the public’s radar for some time now, but it’s worth pinning down. To start, charter schools are public schools (which is why they are often contrasted with “traditional” public schools): They are taxpayer-funded and they do not charge tuition. But they are privately managed, meaning they are not overseen by local districts (although some are authorized by those districts). Some charter managers are nonprofit and some are for-profit. Sometimes charter schools are part of a larger chain (think Success Academy or KIPP), and sometimes they stand alone.

When the charter concept was developed in the early ‘90s, the broad idea was to give the schools more flexibility than traditional public schools—so that they might incubate innovative education ideas—while still requiring them to meet certain standards and accept all types of students, often through a lottery system if there are more interested kids than spots. (There is much debate about whether and which charters successfully meet this mission.) While there is some partisan debate around charter schools, the divide isn’t as simple as Republicans in favor, Democrats against. While Republicans do generally support charter schools, so do a number of Democrats, including the outgoing education secretary, John King, who helped found a charter. But the model has been opposed by Democratic teachers’ unions, which argue that charters pull funds from the traditional public schools the unions represent.

Magnet Schools: Magnet schools are public schools operated by traditional school districts. But they are different than the average neighborhood school in that they offer specialized content. For instance, a school might specialize in math and science, the performing arts, or languages, meaning it would offer different curriculum than other schools in the district. The schools are open to all students in a district instead of just kids who live nearby. Like charters, they are free and often rely on a lottery system to admit students. But unlike charters or private schools, they generally have to follow the same rules and requirements as other schools in the district.

Many magnet programs were created as an attempt to combat school segregation, the idea being that students from all over a district would gather under one roof with a common interest. And districts frequently turn failing schools into magnet programs to try to turn things around (with varying levels of success). Trump has supported the magnet concept in campaign speeches as part of his broader school-choice push.

Public schools: At the most basic level, public schools are schools that are not private. (Yes, obviously, but bear with me.) This term is often used, especially when it’s politically expedient, to refer to schools that are not charter schools or magnet schools, but that’s not technically accurate; as noted earlier, charters and magnets are public, too. Most often, when people say “public school” they mean “traditional public school,” meaning a local neighborhood school that is funded by taxpayers and attended (for free and without a lottery system) by the children who live nearby. The vast majority of American children attend a traditional public school.