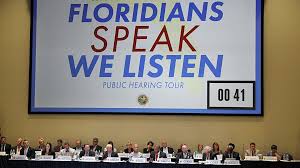 Circuit Court Judge John Cooper clearly didn’t agree with the wording of the last of the constitutional amendments to be put before voters this November.

Cooper on Monday ordered Amendment 8 stricken from the ballot, calling both the amendment language and the title it would have been introduced under as “misleading.”

Studies Show Voters Need a Graduate-Level Education to Understand Ballot Measures Black Students Have Longer Commutes Under School Choice Do School Vouchers Help Kids Get to College? Studies Offer Mixed Results.
Amendment 8, if passed, would have placed term limits on school board members and required legislators to promote the teaching of civics in Florida. Most controversially, it would have given several organizations outside of the public school system the power to authorize the creation of charter schools.

The state would have then had authority “to operate, control and supervise public schools not established by the school board,” Amendment 8 states.

In ruling, Cooper sided with the League of Women Voters, who sued claiming the wording of Amendment 8 was, in the words of League state President Patricia Brigham, “blatantly misleading and confusing.”

Cooper said the title under which Amendment 8 would appear on the ballot, “School Board Term Limits and Duties; Public Schools” could easily mislead voters to think they were voting solely on term limits.

“The failure to use the term voters would understand, ‘charter schools’ … fails to inform voters of the chief purpose and effect of this proposal,” the ruling said.

“It can be gleaned from the text of (Amendment) 8 and debate of the CRC (Constitutional Revision Commission) that the intention of the revision is to exclude district school boards from any role in establishing (as well as operating, controlling and supervising) at least certain public schools going forward,” the ruling said. “This is a significant change in the role of local school boards which is not explained in the ballot summary.”

Former Florida Senate President Don Gaetz, who served on the CRC, said he believed Amendment 8 would be appealed to the state Supreme Court, but that Cooper’s ruling would be upheld there.

“The Supreme Court tends to bend sharply to the left,” Gaetz said.

Gaetz said he supported the charter school portion of Amendment 8 because it is his belief that diversifying the nature of education would be beneficial to everyone.

Gaetz said virtual schools, “lab” schools like Florida High, formerly on the Florida State University campus, or publicly run facilities for children with disabilities like autism or blindness could also be established by the Legislature if Amendment 8 passes.

“The intent and substance was not charter schools, it was much broader than that,” he said. “Ten years ago virtual education was considered edgy, strange and suspicious, and we don’t know what form education will take 10 years from now. This envisions the need for education methods, facilities or organizations that in the future might be different from traditional schools.”

Gaetz said he was most disappointed that the civic literacy portion of Amendment 8, which he sponsored, would not be considered by voters.

Amendent 8 was one of eight constitutional amendment proposals put forward this year by the CRC, which brought to 13 the total number of amendment proposals Floridians will be asked to vote upon Nov. 6. Three of the remaining five questions were put up by the Florida Legislature and two more were approved through petition drives. Each must receive a 60 percent majority vote to be added to the state’s governing document.