LeBron James does not do anything halfheartedly.

So when Michele Campbell, the executive director of the LeBron James Family Foundation, suggested to the now-Lakers star that their mission might be easier to accomplish if they opened a school, James reacted as if the answer was obvious.

“‘Well, why aren’t you doing that?’ ” Campbell recalls James asking.

Monday will be the first day of school for 240 at-risk third- and fourth-graders at the I Promise School. It is a public, non-charter school, just like the ones James attended as a child, but it seeks to offer all the things kids growing up like James did need in order to succeed.

James’ foundation is the top donor and worked with Akron Public Schools to meet all its standards and regulations.

And here, the staff nurtures not just the child’s education, but the outside factors that might interfere with an education.

“I know these kids basically more than they know themselves,” James said in a video released Sunday through his media platform, Uninterrupted. “I walked the same streets. I rode the same bikes on the streets that they ride on. I went through the same emotions. The good, the bad, the adversity. Everything these kids are going through, the drugs, the violence, the guns, everything they’re going through as kids, I know.” 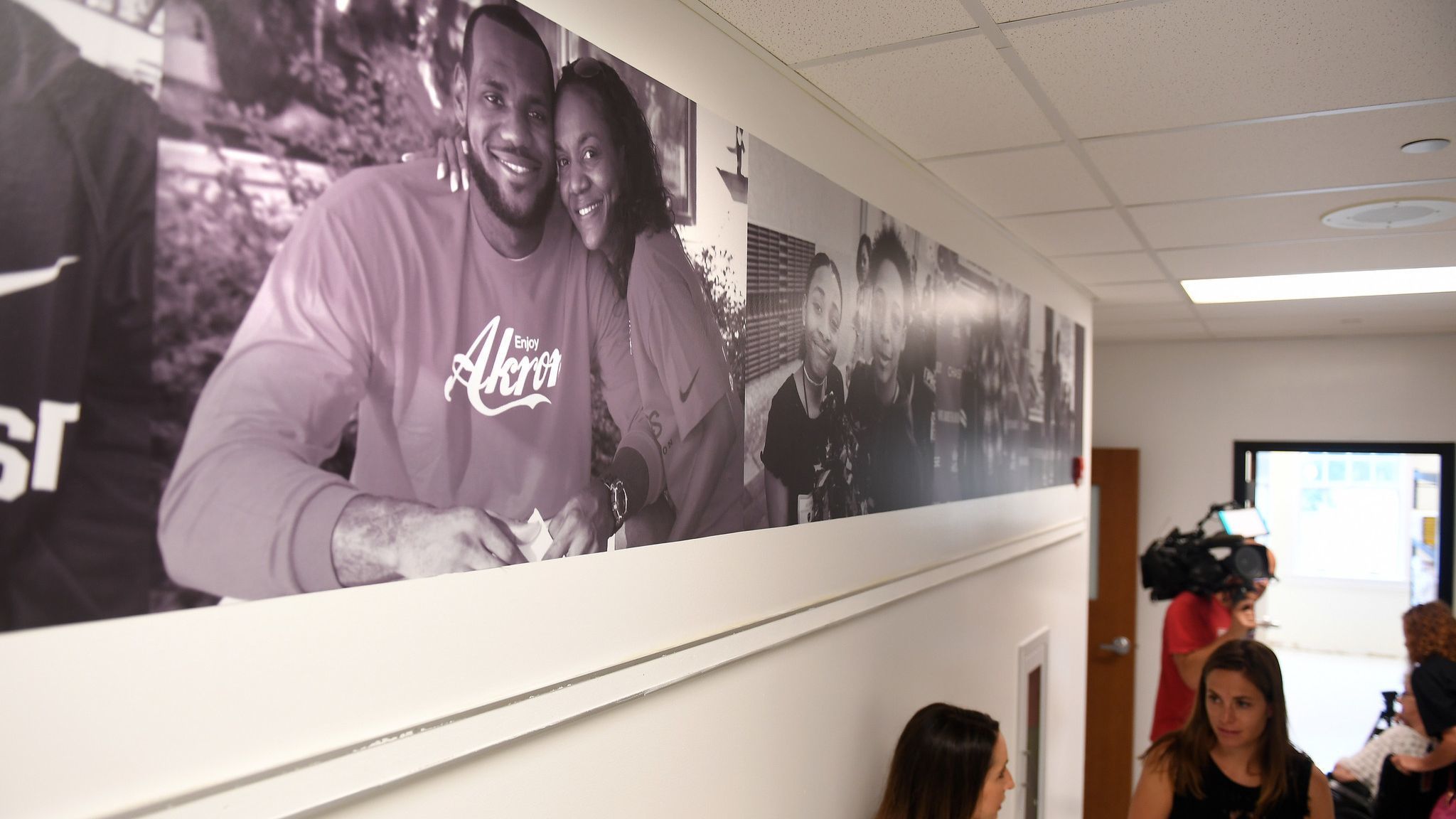 Pictures of LeBron James line the hallways at the I Promis School in Akron, Ohio. Wally Skalij / Los Angeles Times
When he was in fourth grade, James missed weeks of school because of his family’s instability. He was raised by a single mother, Gloria James, who was 16 years old when he was born. Gloria will have a support role at the school, and a space in the LeBron James Family Foundation office at the school.

“LeBron went to a public school,” said Keith Liechty-Clifford, the coordinator of school improvement for Akron Public Schools. “He went to Akron public schools. It was the community that helped him and his mother, Gloria, it was teachers, it was administrators. It was important for the foundation to help us and to look at something bigger. Look at our community and change urban education across the country.”

The school provides services to help the kids handle trauma, stress from parents struggling to make ends meet and trouble that comes from too much free time and too little supervision. It also provides job and family services for the children’s parents to help them get GEDs or handle unexpected job loss. The school has a pantry with donations from a food bank, where parents can choose foods to prepare for their families.

Every student will get a bicycle because bicycles helped James get away from the more dangerous parts of his community while growing up.

“I think the missing link in public education is that family wraparound support,” said Brandi Davis, the school’s principal. “Because our students come to school and they’re worried about things at home. … We want to create that safe, that secure and that caring and loving environment for our families and our students so that our kids can focus on education.”

We want to create that safe, that secure and that caring and loving environment for our families and our students so that our kids can focus on education. 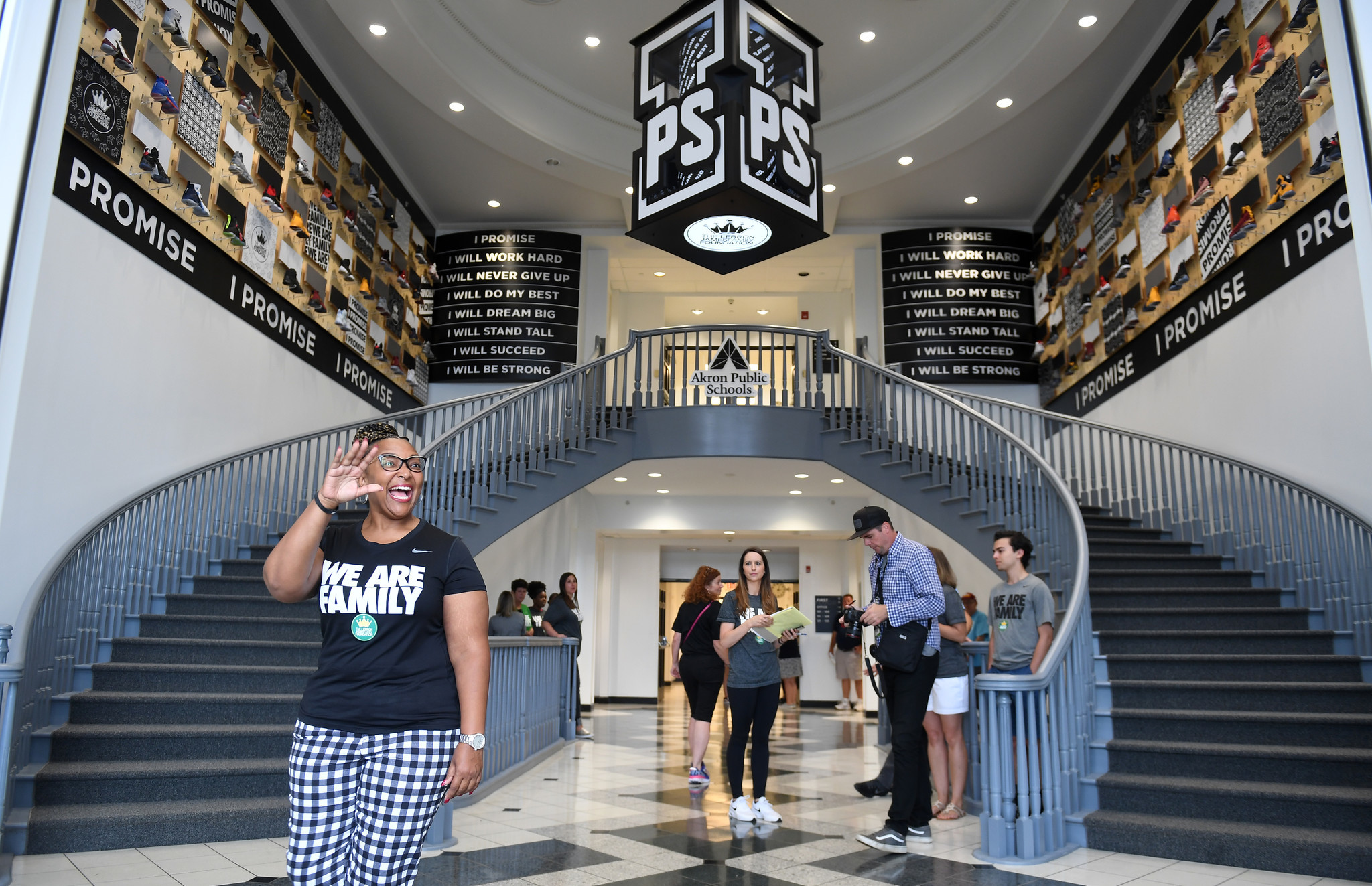 The children were randomly selected from a pool of Akron students whose reading levels were a year or two behind what they should be at their grade. Akron’s public schools have been among some of the lowest-performing schools in Ohio.

On Monday, the students will enter a gleaming facility inside a stately brick building that sits between a McDonald’s and a convenience store. Inspirational quotes wallpaper the interior and the entrance is decorated with James’ game-worn shoes, which will be sold as a fundraiser for the school. Some of the walls are painted with murals of such black leaders as Martin Luther King Jr., Muhammad Ali and Jackie Robinson.

To truly provide emotional and psychological services for at-risk children and their families requires well-trained teachers who have structured and plentiful support. To that end, the school will take care of its teachers, too. They’ll have access to psychological services. Every Wednesday afternoon will be reserved for career development. James has even hired a personal trainer to work with any teachers who want a guided workout.

School supplies are completely provided by the school. That was a pleasant surprise for Angela Whorton, an intervention specialist at the I Promise School. She’s been a teacher for 10 years and almost always had to spend her own money to properly stock the classroom.

She’s spent her own money here, too, but not for necessities. She bought a black rug that functions like a red carpet and put stars on them so the students feel special walking into the room. The writing utensils in her room are topped with white artificial flowers.

Through those trees was my backyard. And I used to dream big. 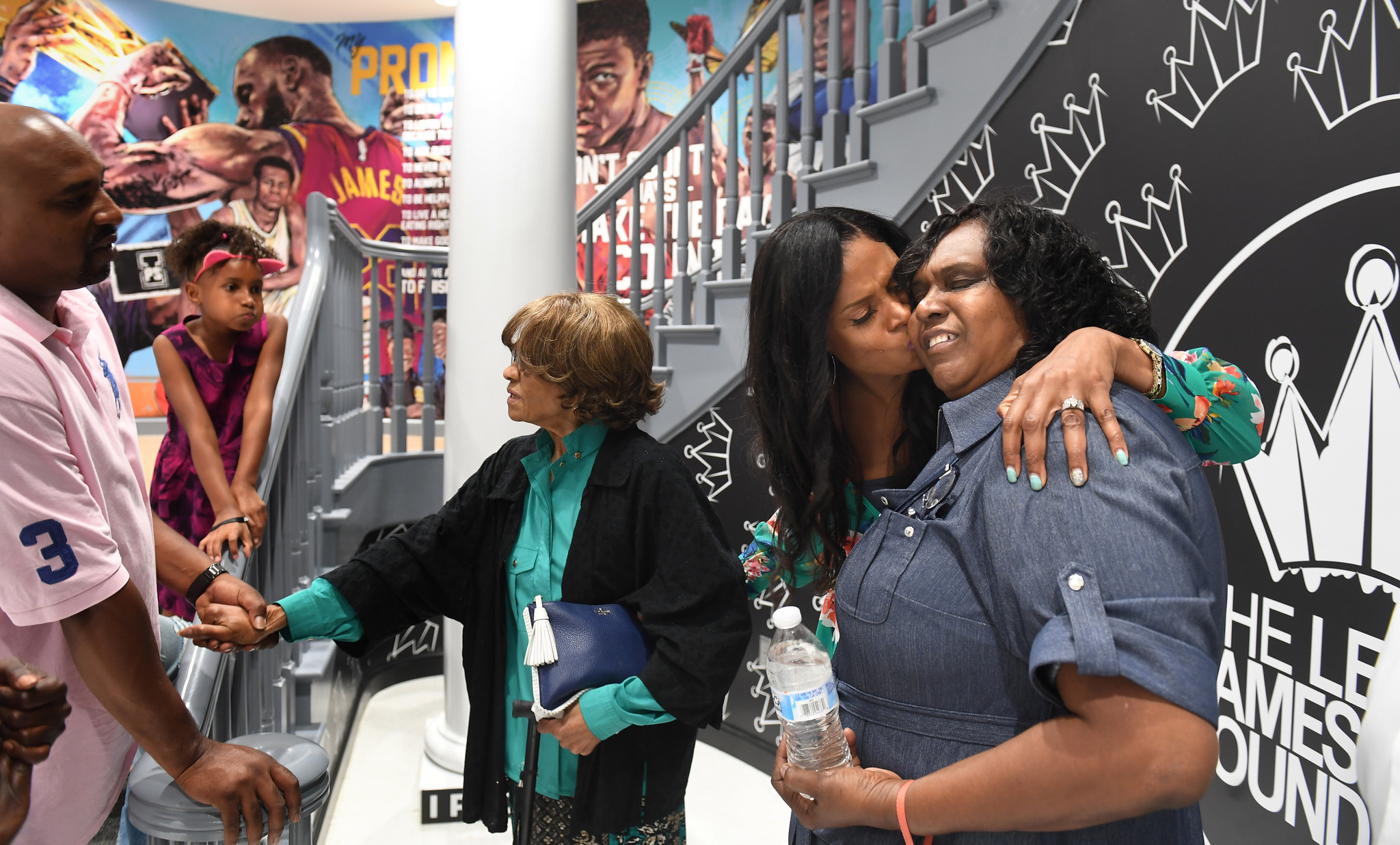 From her classroom on the second floor, Whorton pointed out of a window, to a modest backyard belonging to a nearby home. She moved to Akron when she was in eighth grade.

“I actually lived right — through those trees was my backyard,” Whorton said. “And I used to dream big. At the time my mom was struggling as a single parent. She promised us that if we had an education we could be and do anything we needed to be.”

When they didn’t have electricity, Whorton’s mother lit candles so she and her brother could do their homework. When the plant where she worked shut down, Whorton’s mother went back to school and took two jobs to care for her children. She’d stand in line at the food bank to make sure she had something to feed her kids.

Whorton knows firsthand just how valuable the school she now works in can be in this community. Sunday afternoon her family got a closer look at the school and she couldn’t stop her tears.

“The family wraparound approach is going to help the community,” Whorton said. “Right from my window. Looking at my backyard where I used to dream. There’s nothing more electric than that.”