No other city in the country screens students for as many schools as New York — a startling fact all but lost in the furor that has erupted over Mayor Bill de Blasio’s recent proposal to change the admissions process for the city’s handful of elite high schools.

One in five middle and high schools in New York, the nation’s largest school district, now choose all of their students based on factors like grades or state test scores. That intensifies an already raw debate about equity, representation and opportunity that has raged since Mr. de Blasio proposed scrapping the one-day test now required to gain entry into New York’s eight elite high schools. Black and Hispanic students are underrepresented in many of the most selective screened middle and high schools, just as they are in the specialized high schools.

In Los Angeles, the country’s second-largest district, there are only two selective high schools and two “highly gifted” magnet schools. Boston has seven schools that screen — all high schools — including the prestigious Boston Latin School, a feeder for Harvard University that has an entrance exam akin to New York’s specialized high school test. In Seattle, the only screened schools are two elementary schools with accelerated curriculums for “highly capable” students who pass a district-administered gifted test.

“When we have a publicly funded school system, the notion that you can pick and choose your students is problematic,” said Matt Gonzales, director of the school diversity project at New York Appleseed, an organization that pushes for integrated schools. “It undermines the democratic, and free and open nature of public education.”

Unlike many cities, New York, with its 1.1 million students, also has a large base of middle-class families that attend the public schools, said Richard D. Kahlenberg, a senior fellow at the Century Foundation. Screened schools are a way to appeal to them and keep their children in the public schools, especially in a city where public housing projects sit beside million-dollar apartments, he said.

But the result has been that New York, in essence, has replaced tracking within schools with tracking by school, where children with the best records can benefit from advanced classes and active parent and alumni associations. According to the city, of the more than 830 middle schools and high schools, roughly 190 screen all of their students. Many of these screened schools are clustered in Manhattan and Brooklyn, with enrollments that are more white, Asian and affluent than the overall school population.

Edwin Franco, a father of two girls who lives in the Bronx, said that too many selective schools cherry pick the best students — and deprive everyone else of opportunities. “They’re almost like a factory,” he said. “They’re churning out high-performing kids who are doing great while the rest of the kids are trying to figure it out on their own because they don’t have the same resources.”

Richard A. Carranza, the schools chancellor, said in an interview that screened schools have a limited place in a public school system, providing an option for those students who want an “intense academic environment” and can thrive in it. But, he said, “the role of those kinds of schools in a portfolio as large as New York City’s is very specific.” 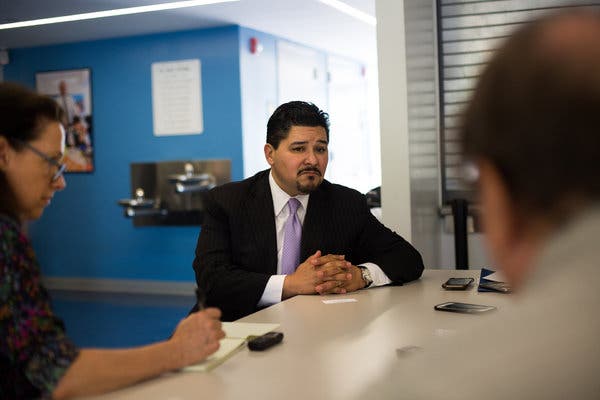 When asked if the city was considering changing how schools screen students, Richard A. Carranza, the chancellor, said the current proposal was to deal with the specialized high schools, but “I’m looking at everything.”CreditKevin Hagen for The New York Times

Until at least the 1970s, most New York City students attended their neighborhood schools. Over the years, more options to these neighborhood schools emerged, often appealing to middle-class families and providing an alternative for families of many backgrounds to large comprehensive schools that were overwhelmed with struggling students, according to educators and parents.

“Educational Option” high schools, which admit students of varying academic abilities along a bell curve, flourished in the 1980s and 90s. Some of the most popular of these schools, including Beacon High School and Baruch College Campus High School later morphed into screened schools for high-performing students.

Then, during Mayor Michael R. Bloomberg’s administration, the city required all children to apply to a high school in their eighth-grade year. Students rank up to 12 choices, and then get matched to one school by a special algorithm. The idea was to allow students to escape failing neighborhood schools and apply anywhere they chose.

In the extent of its choice system, New York is unique. Across the country, about three-quarters of all students simply attend their zoned neighborhood schools.

But as students increasingly chose their schools, the system evolved so that many schools became the ones choosing the students.

The number of high schools that admitted students only through academic screening — including the specialized high school exam, other tests and grades, or auditions — has more than tripled to 112 schools in 2017 from 29 schools in 1997, according to an analysis by Sean P. Corcoran, an associate professor of economics and education policy at New York University. Screening requirements vary from school to school, but the most sought-after schools often require at least a 90 average.

“You’ve set up a system of competition among high schools in which the easiest way for a principal to win is to select the students who are best prepared,” Mr. Kahlenberg said. “Certainly having that market-based ideology — without guidelines for equity — appears to have accelerated the growth of screening.”

The most coveted schools get thousands of aspirants for a limited number of seats and operate like de facto private schools with competitive admissions that can require families to stand in long lines to attend open houses, and pour thousands of dollars into tutors and admissions consultants.

White and Asian students are more likely to go to screened high schools, according to a study that looked at high school placements for the graduating class of 2015 by Measure of America, which is part of the Social Science Research Council. Black and Latino children, on the other hand, most often attended high schools without academic admissions requirements. Poor students were also overrepresented at those schools. 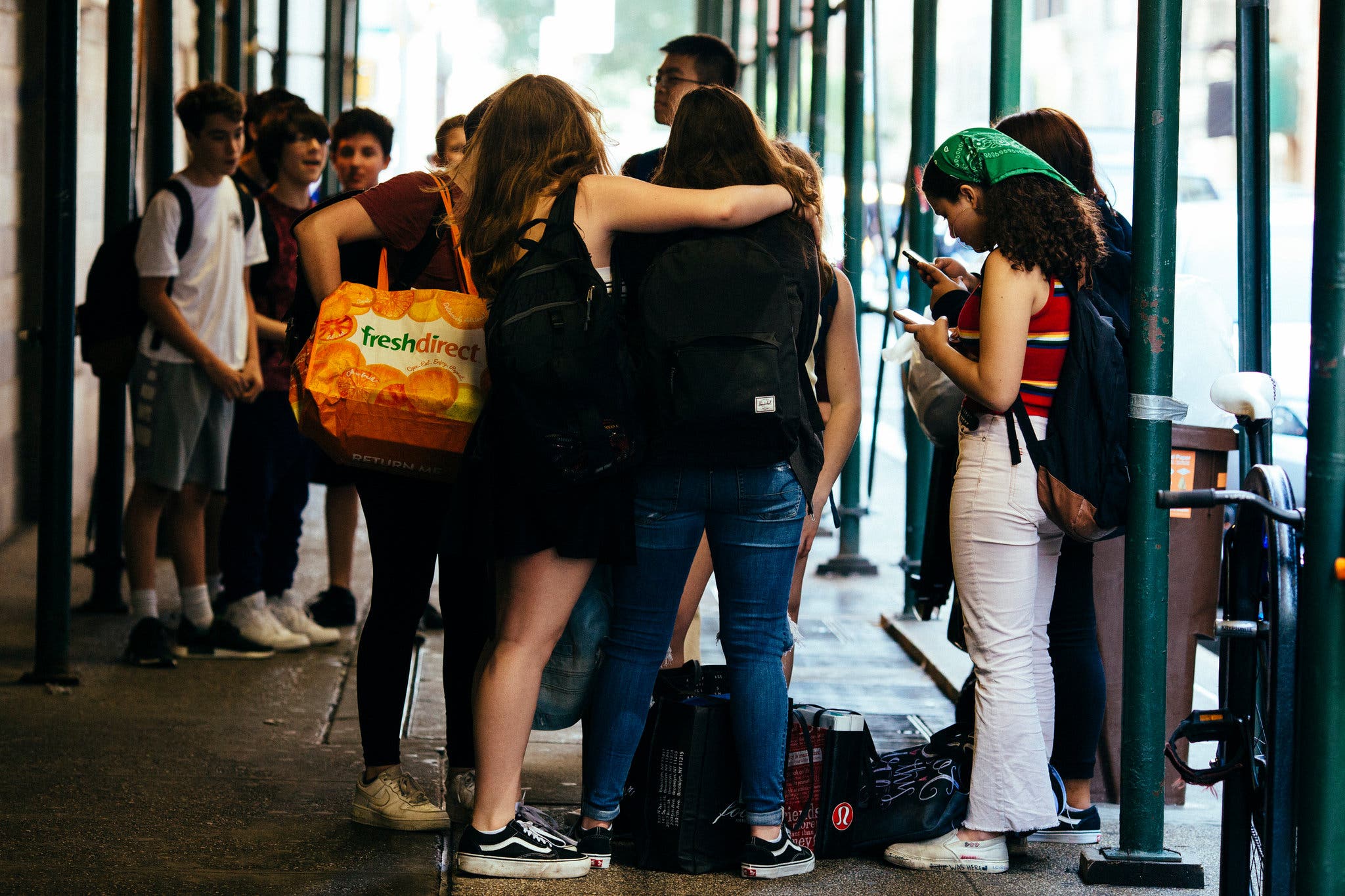 Baruch College Campus High School in Manhattan started out taking students of varying academic abilities, but now requires an average above 90 and high test scores. Its student population is 79 percent white and Asian.CreditSara Naomi Lewkowicz for The New York Times

Naila Rosario, 37, has a son in seventh grade. The selection process, she said, discriminates against families that can’t afford to pay for prep. Her son, she said, would stand little chance on the specialized high school exam next fall unless she sent him to tutoring, which will cost close to $2,000. She is still thinking about whether she can afford $250 for a consultant to help him assemble a portfolio of writing, a requirement of other screened schools. “Something needs to be done to level the playing field,” she said. “Everyone should have a fair shot of getting in. It has to be equitable.”

And now as many coveted middle schools screen, the competition has moved down to that level as well. Mr. Franco attended neighborhood schools in Washington Heights, and he only went through a selection process for high school. Both his daughters have already been through screening for middle schools.

“As a parent, I’m seeing the same level of intensity to get into middle school,” he said. “That’s what baffles me, middle schools are just as competitive as high schools.”

The process at every level can be grueling for children and their families. “I don’t think anyone who’s gone through the high school application process thinks it’s anything but legalized child abuse,” said Clara Hemphill, the editor of the popular school guide InsideSchools, a project of The New School’s Center for New York City Affairs. “I think it would be a healthier system if we poured resources into neighborhood schools to make them stronger.”

Mr. Carranza has suggested that screening is “antithetical to what I think we all want for our kids.” Yet the two school systems he ran previously also screen students, but in far smaller numbers than in New York. In Houston, 17 of the district’s 284 schools are magnet schools that have minimum academic requirements for grades and test scores; If there are more qualified applicants than seats, students are chosen by lottery.

San Francisco has two screened schools, Lowell High School, which has academic criteria and which Mr. Carranza’s daughter attended, and Ruth Asawa San Francisco School of the Arts, a high school that requires an audition or portfolio.

Overhauling the admissions process for the specialized schools requires approval from the Legislature; Carl E. Heastie, the Assembly speaker, has said the lower house would adjourn without taking up the issue. But Mr. de Blasio and Mr. Carranza, who took over in April, could change the wider screening process on their own.

Asked whether they were considering that option, Mr. Carranza said, “The proposal on the table right now is specialized schools, but I’m looking at everything.”