Students in the predominantly Black school system are “treated like second-class citizens.”

etroit schools superintendent, who’s white, shocked a group of state leaders with the unvarnished truth that racism is at the core of the city’s failed public school system.

“There is a racist element to what has happened,” Detroit Schools Superintendent Nikolai Vitti told the audience Thursday, during a panel discussion at Detroit’s New Era of Collaboration on Education, according to Chalkbeat.org.

He added: “Children in Detroit have been treated like second-class citizens. When a system is allowed to be run over a decade by individuals that had no track record of education reform … no governance structure, years and years of low performance, a lack of growth, drop in enrollment, that would never, ever happen in any white suburban district in this country.”

The annual policy conference, which draws heavily from the white business and political crowd, is unaccustomed to hearing straightforward talk about the city’s school that serve mainly Black students. Some of the audience members are the very people who have been influential in making policies that impact schools statewide, Chalkbeat said.

Vitti, who had been superintendent of Duval County Public Schools in Jacksonville, Florida, took over Detroit’s school system in April 2017. He was “shocked” and “horrified” to see the condition of Detroit schools, which were operated by several state-appointed emergency managers over seven years.

Disgusting conditions for our teachers and children: Mold, mushrooms and mice in Detroit Public Schools http://www.businessinsider.com/detroit-public-schools-teachers-say-schools-are-unsafe-2016-1 …

Disturbing images of the mold, mushrooms, and bullet holes in Detroit’s schools that led to…

The photos show crumbling walls and floors, mold, leaking ceilings, and other horrors.

Things reached a boiling point in 2016 with scores of teachers either quitting or participating in sick-outs to protest the hazardous conditions. 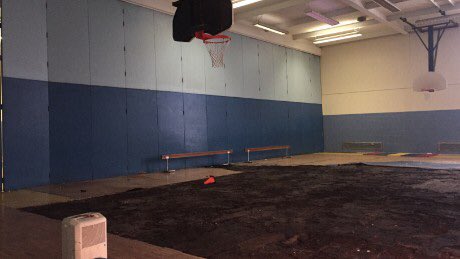 Sick-out — 86 (of 100) Detroit public schools closed as teachers protest deplorable conditions. This is one gym:

With those conditions, it’s no wonder Detroit public school students are struggling academically. They scored last nationally again in the latest results of the National Assessment of Education Progress, the Detroit Free Press reported.

Vitti has vowed to turn things around. But that won’t happen until the students get the first-class treatment they deserve.