That’s one of the first things Larry Cagle says on the phone. He is spitting nails. The Tulsa English teacher is one of the leaders of a grassroots organizing group, Oklahoma Teachers United, that they say represents thousands of public school teachers around the state. His group, and both of Oklahoma’s teacher’s unions, support the walkout and rally happening across the state Monday in support of higher wages and more state revenue.

Teachers are striking even though state legislators passed a pay raise of about $6,000 last week. That vote followed earlier walkouts. The bill, if signed, would bring Oklahoma’s teacher salaries from among the lowest in the nation, to the middle of the pack.

The Fight Over Teacher Salaries 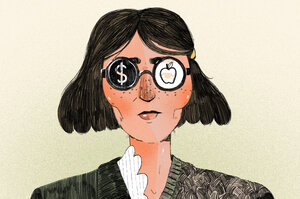 A look at the numbers: Teacher salaries adjusted for cost of living.

The Oklahoma teachers are not the only ones unhappy. Teachers in Kentucky are gathering Monday at the state capitol to press for education funding. Many schools there are on spring break, allowing teachers to travel to Frankfort. Schools not on spring break closed.

This wave of teacher-led actions around the country was kicked off when teachers in West Virginia emerged victorious from a nearly two-week strike earlier this month. In Arizona, hundreds of teachers walked out last week, and there have been rumbles as far away as New Mexico and Alaska.

The rally in Kentucky is led by the Kentucky Education Association, the state’s union affiliate. But in many other states, grassroots teachers groups, like Larry Cagle’s group in Oklahoma, have taken the lead — often using social media to organize.

In Oklahoma, teachers like Cagle have stepped up, discontent with union leadership. Oklahoma is a right-to-work state, which means that employees don’t have to join the unions there. The American Federation of Teachers has about 2,700 members out of 42,000 teachers. The state’s other major union, the Oklahoma Education Association, says it has 40,000 members including many different kinds of school employees like bus drivers, retired teachers and education majors at Oklahoma colleges and universities.

That’s a major reason that Cagle calls the unions “weak and vulnerable.” He says his group has been forced to take matters into their own hands. “We are the only unified protest group,” he says. Teachers represented by Cagle’s group want a $10,000 raise. “We had 70 percent turnover in the last five years in my school,” he says. “You’re not going to stop that with a $6,000 raise.”

If they don’t get what they want, he threatens continuing protests into the summer and beyond.

They’re also in it for the long-haul, advocating for a tax change to help pay for school funding that will be on the ballot in November.

Ed Allen, the leader of the Oklahoma City AFT, tells NPR he’s never seen anything like this negotiation process in his 26 years with the union. “Never have I ever thought” that he’d be negotiating with lawmakers on the one side and teachers on the other, he says. “How do you negotiate with Facebook?”

“We consider it a down payment,” he said in a statement last week when his union accepted the budget deal. It’s a nuanced position. He tells NPR that despite the “passionate” voices of those on social media, “We don’t see any way of getting any more money.”

That’s not enough, says Brendan Jarvis, a middle school geography teacher just outside of Tulsa: “[Legislators] are not talking about anything right now that teachers are happy with.” He’s a board member of the Oklahoma Education Association, the state’s biggest teachers union. The OEA didn’t accept the deal.

Jarvis says he and other OEA members are walking out — and they’re planning on staying out, until a plan is passed that teachers are happy with. At his school, educators are coordinating child care plans and working to feed students if lawmakers don’t pass a deal that satisfies their demands.

“I’ve never been left out in the cold,” by the union, says Ashley Robertson, a fouth-grade teacher and OEA member in Blanchard, Okla. She’s attending the rally in the capitol with many of her colleagues.

When the Oklahoma senate voted last week to increase teacher pay, thousands of Arizona teachers gathered in Phoenix at the capitol. Many wore buttons that read: I don’t want to strike, but I will.

Karvelis, a music teacher in Tolleson, Ariz., noticed the lack of funding right away when he arrived in the state to teach two years ago.

“There were days when I had more kids than chairs,” he told NPR. Today, he has seven working keyboards to teach about 40 kids how to play piano. “Every single kid that I’ve ever had deserves more than this. There are kids who are not being given a fair chance here.”

Karvelis says that, once a critical mass of teachers is on board with a walkout, “the power is in our hands.”