Signs from recent teacher strikes in West Virginia, Oklahoma and Kentucky — some of them carried by parents and students — tell the stories best:

“Speed limit 35. Not class size.”
“Do the math: 28 seats, 44 students, 89°, 0 books. CPS classroom.”
“Teacher working conditions are student learning conditions.”
“Fighting for what our kids deserve.”
Students for teachers: We support our teachers, why don’t they?”
“Fund our public schools, we are the dream.” 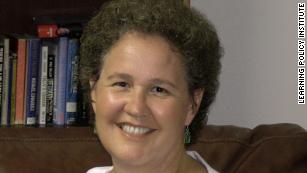 Linda Darling-Hammond
This week’s teacher strikes in Arizona and across Colorado are the latest in a series that have taken place this year. These strikes have been much in the news, and nearly every news story says the same thing: Teachers want better pay and better benefits.
While that’s true, there’s more to the story than teachers’ compensation. Teachers — and the parents and students marching alongside them — are demanding better teacher pay and better school funding. They’re striking and protesting to highlight school conditions that have deteriorated badly over the last decade.
A nation that under-educates its children in the 21st century cannot long survive as a world power. Prisons — which now absorb more of our tax resources than public higher education did in the 1980s — are filled with high school dropouts and those with low levels of literacy. We pay three times more for each prisoner than we invest in each child’s education annually. With an aging population and only three workers for every person on Social Security, the United States especially needs all young people to be well-educated enough to gain good work in the complex and rapidly changing economy they are entering. Without their ability to pay the taxes that support the rest of society, the social contract will dissolve
Inadequate education funding has created the conditions that make teaching the daily struggle that has finally drawn teachers and families to the picket lines: unmanageable class sizes, inadequate resources and facilities, cuts to essential medical and mental-health school services and more. As child poverty, food insecurity and homelessness have climbed to among the highest levels in the industrialized world (more than one in five live in poverty and in 2014 one in 30 were homeless), schools have been left with fewer resources to address these needs and support student learning. 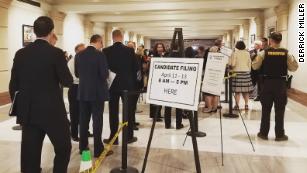 Frustrated Oklahoma teachers run for office 01:38
During the Great Recession, beginning in 2007, states made deep cuts to their education budgets. Even after the recovery, according to the Center on Budget and Policy Priorities, most are still providing fewer school dollars per student than they had in 2008.
To be sure, teacher salaries are also a significant concern: US teachers are paid 30% less on averagethan other college graduates, and in most states, the average teacher heading a family of four qualifies for several forms of government assistance. The children of teachers can themselves be on food stamps at home and qualify to receive free lunch at school.
According to the Economic Policy Institute, US teachers’ wages have declined relative to those of other college-educated workers since the early 1990s, when they were at their most competitive — and when teacher attrition was much lower than it is today.
When you combine these low salaries with the working conditions most public school teachers now experience — especially in districts serving poor children, who are now a majority of children in public schools — you have a recipe for burnout and attrition.
A recent Organization for Economic Co-operation and Development survey found that US teachers teach more hours per week than teachers in other countries surveyed and have nearly the lowest number of hours for planning. They also have above-average class sizes and teach more low-income students than teachers in other OECD countries. Not surprisingly, as national statistics show, about 8% of US teachers leave each year — most for reasons of dissatisfactionrather than retirement — more than twice the rate of teachers in high-achieving countries like Finland, Singapore and Canada. 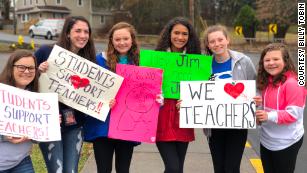 The West Virginia teachers have launched a movement
Because teaching has grown so unattractive as a profession, teacher education enrollments have dropped by more than 30% in recent years while turnover also climbed. As a result, teacher shortages are widespread, and at the beginning of this school year, the United States had more than 100,000 teaching positions that were filled by unqualified candidates. About 90% of those open teaching positions were created by teachers who left the profession. This affects students, who experience canceled courses, larger class sizes and unqualified teachers — many of whom leave quickly, creating churn and instability that further depresses student learning.
All of these problems are at their worst in the schools and districts serving the greatest concentrations of students of color and those from families living in poverty, but almost no schools are immune from the acute shortages of special education teachers, as well as teachers of math, science and computer science, bilingual education, and world languages — all essential areas of learning for a nation that would like to compete in the globalized knowledge economy.
To solve these problems, the federal government ultimately needs to launch another War on Poverty, as conditions for America’s children are much worse than they were 30 years ago and far below the standards of our peer nations. In addition, low-spending states and those with unequal distributions of education dollars need to increase and equalize school funding so that all children can learn and teachers can teach under reasonable conditions.
The solutions are not a mystery. Systems in Australia, Canada, Finland, and Singapore have found ways to compensate teachers as professionals and adequately and equitably fund their schools — and their students achieve at higher rates as a result. We can also look closer to home, where high-achieving states like Connecticut,
Massachusetts, New Jersey and Vermont have not only invested wisely and equitably in their teachers and schools but also in health, early learning and social supports that reduce poverty and support children and families with greater needs.
The dedicated individuals who choose the teaching profession don’t do it for the money, but they can’t do it at all without reasonable school funding. As another protest sign put it, “I work to make a living. I teach to make a difference.” Funding our education systems — and the people who make them work — is one way we can all make a difference for our children and our society.
JOIN THE MOVEMENT #iBELIEVE