Kassandra Domiguez leading a class this month at Sunset Ridge Elementary School in Glendale, Ariz. Many students were dressed in red in solidarity with Arizona teachers, who planned to walk out on Thursday.CreditCaitlin O’Hara for The New York Times 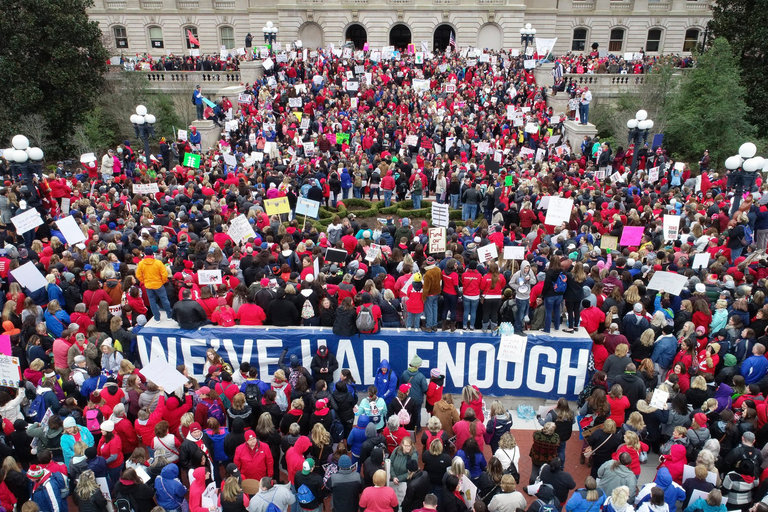 By SIMON ROMERO and JULIE TURKEWITZAPRIL 26, 2018

PHOENIX — Thousands of teachers in Arizona and Colorado walked out of their classrooms on Thursday to demand higher pay and more funding for public schools, the latest surge of a teacher protest movement that has already swept through three states and is spreading quickly to others.

Hundreds of public schools were shut down in Arizona and Colorado in response to the walkouts, which in recent months upended daily routines in the Republican-dominated states West Virginia, Oklahoma and Kentucky.

“Our colleagues in other states have shown us what’s possible,” said Noah Karvelis, 23, a music teacher at Tres Rios Elementary School near Phoenix and a leading organizer in Arizona. Mr. Karvelis singled out as inspiration the statewide strike in West Virginia, where a Republican governor signed a bill last month giving teachers and other state employees a 5 percent raise.

“Our governor refuses to sit down with us and I don’t have much confidence in our legislators,” Mr. Karvelis added. “But maybe they’ll feel different when they see what they’re up against.”

An analysis by The Arizona Republic showed that more than 840,000 of the state’s 1.1 million public school students are potentially affected by the closings.

Teachers and their supporters, many of them wearing the red shirts that symbolize their movement, began gathering on Thursday morning around Chase Field, a baseball stadium in downtown Phoenix. From there, they planned to march around midday to the Capitol and hold a rally to voice their demands for restoring education funding to 2008 levels, raises and a halt to tax cuts until per-pupil funding reaches the national average.

They pressed ahead with the walkout despite a promise by Gov. Doug Ducey, a Republican, to increase their salaries 20 percent by 2020. Betting that a growing economy will bolster revenue, Mr. Ducey said he could provide the raises and reinforce school budgets without tax increases, a proposal that many teachers and lawmakers doubted. Educators announced last week that they had voted in favor of the walkout, saying that 78 percent of those who cast ballots had said yes.

In a statement Thursday, the governor urged citizens to contact their legislators to urge approval of his pay plan. “Without a doubt, teachers are some of the biggest difference-makers in the lives of Arizona children,” he said. “They need to be respected, and rewarded, for the work they do — and Arizona can do better on this front.”

Joe Thomas, president of the Arizona Education Association, the state’s largest teachers’ union, said that the starting salary for teachers in Arizona was about $35,000, which for many in the profession made paying off student loans or starting a family difficult. The organizers of the walkout, Mr. Thomas said, sought to show political leaders how much educators were hurting financially in Arizona, where Republicans control the State Legislature and years of tax cuts have drained education budgets.

“A teaching certification used to secure landing in the middle class,” Mr. Thomas added. “That’s not the case anymore in Arizona, and we need to do something about it now.”

It remains to be seen how Arizona’s leaders will respond to the teachers’ movement, widely known here as #RedforEd, and how long it could last. Teachers in Oklahoma picketed the Capitol for nine days, calling for funding that largely did not materialize, though they did get a $6,000 raise. The statewide teachers’ strike in West Virginia shut down schools for almost two weeks.

In both Arizona and Colorado, organizers have asked teachers to wear red during the walkouts, as they have been doing for weeks in smaller protests.

Thousands of teachers planned to descend on the steps of the gold-domed capitol in Denver on Thursday and Friday, where they will meet with lawmakers and urge them to increase classroom funding. At least 27 districts in Colorado have canceled classes, saying they will not have enough teachers to accommodate students on those days.

The spread of the teacher protest movement to Colorado, where Republicans control the State Senate but Democrats command the State House of Representatives and governor’s office, signals a crossing of political boundaries. Until now, large-scale organized protests had been limited to deep-red states with weak public-sector unions.

Colorado’s economy is booming, but the state teachers’ union, the Colorado Education Association, says the state has shorted the education system $6.6 billion since 2009.

This has affected students in numerous ways, said Kerrie Dallman, the union president. Half of the districts in the state now have four-day school weeks, and the state’s low teacher pay has helped create a 3,000-person staffing shortage.

Teachers, Ms. Dallman said, are working two or even three jobs, buying their own school supplies or turning to GoFundMe to pay for new textbooks.

“All of the educators who are planning to come down to the Capitol, they would much rather be in the classroom educating their students,” Ms. Dallman said. “But we are collectively fed up after years of doing more with less and being promised it will get better in the future.”