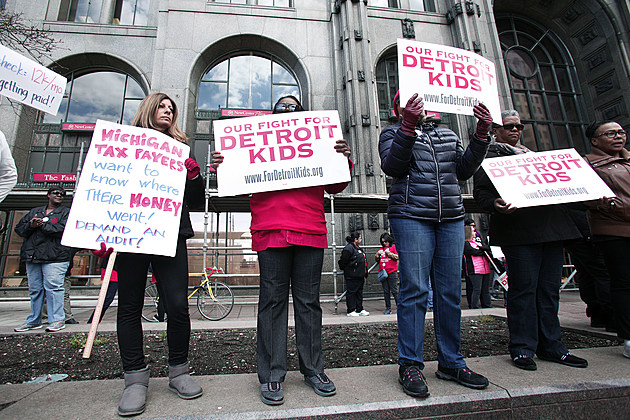 For the second time in two years, a statewide study shows that Michigan is underfunding its K-12 public schools.

The second study was released in January by a bipartisan group of educators and business people who formed the School Finance Research Collaborative.

It found that the base cost to educate a regular student in K-12 grades is $9,590 per pupil, not including transportation, food service or capital costs.

But some students require more resources to be successful.

Ron Koehler, assistant superintendent at Kent Intermediate School District, and a member of the collaborative, said it costs more on average to educate at-risk students because they come to school with more needs than average students.

“This is not about money,” he said. “It’s about student success.”

But, he said, money does help to attract and retain talented teachers.

He said the second study was needed because Michigan’s students are falling behind the rest of the nation academically.

Koehler said Michigan students used to perform in the top quartile of the nation on standardized tests. But, as funding has slipped, so has student performance.

“They now perform in the bottom quartile on national standardized tests,” he said. “… We’re falling further behind is the real message.”

In 2000, Michigan was ranked the eighth highest in per-pupil spending. That ranking slipped to 24th in 2016.

In inflation-adjusted numbers, Michigan’s per-pupil spending has fallen by $663 since 2000, while the U.S. average has increased by more than $1,400 per student.

He said Michigan educators are motivated to implement the best practices when it comes to teaching students, but often can’t due to a lack of funding.

The problem extends beyond high school.

Koehler said there are many jobs going unfilled because there is a shortage of qualified people.

“Talent is the biggest challenge,” he said. “We need to make changes in our schools so students have deeper learning. … We need 100 percent of our graduates to be prepared to be successful.”

He said the first study, which was commissioned by the state and came out in June 2016, left many questions unanswered about how best to finance the state’s education system.

“We had hoped for a study that would show what it takes to bring every child to proficiency based on Michigan standards,” he said.

Instead, he said the study showed how much money the best schools in the state spend per student.

“It told us what we already know – that schools with greater concentrations of poverty, English language learners and special education students are not meeting the state standards, and they need more resources to meet those standards,” he said.

Koehler said the second study was supported by all 57 of the state’s ISDs, including Berrien RESA. He said he hopes the results will be used by state legislators to make better decisions about how to fund K-12 public education.

“It’s being relatively ignored, and I think that’s too bad,” he said. “We have been underfunding education for a long time.”

“We’re pretty good at ignoring studies that don’t show what we want them to show, and it’s a little frustrating, he said. “I feel like I’m always crying in the wilderness sometimes on public school funding these days in Lansing. But, I’m going to keep shouting and keep working to restore some of the funding and let us catch up with some other states.”

Augenblick, Palaich and Associates in Colorado took part in both studies.

Company Vice President Justin Silverstein said there are four ways to estimate how much money is needed to educate a child. He said that in the first study, the state directed his company to look at only successful school districts, which is the approach that will most likely show the lowest cost per student.

He said it is best to use multiple approaches, so for the second study, his company partnered with Picus Odden and Associates to use two other approaches – evidence-based and professional judgement.

He said one group studied the best research out there about what schools need to have successful students. Meanwhile, another group met with hundreds of Michigan educators.

In the end, he said both approaches came up with similar results.

“We’re looking at that idea of vertical equity,” he said. “Our goal is to fund schools so all students succeed. … It’s all about the kids in the end.”