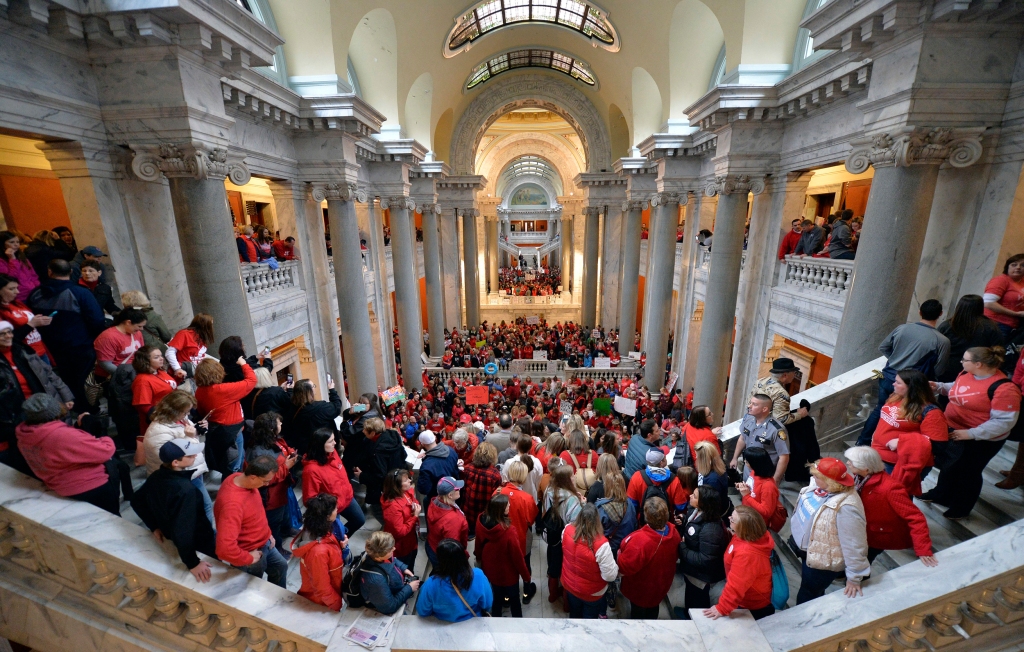 The Jefferson County teachers union has called for more protests after Gov. Matt Bevin announced on Monday he would veto both the budget and tax reform bills.

And the Jefferson County Teachers Association called on the statewide union, the Kentucky Education Association, to spread the word.

“JCTA leadership is asking on KEA to call every public school educator and advocate who can come to Frankfort when the legislature goes back into session on Friday to do so in order to demand that the legislature override these harmful cuts that will hurt our students,” the organization’s Facebook page said.

The statement comes as Louisville teachers return to the classroom for the first time since a sickout forced the cancellation of classes on the last day before spring break.

That came March 30, the day after lawmakers pushed through surprise pension legislation in Senate Bill 151, which had been an unrelated measure. More than 1,200 teachers called in by 4:45 a.m., and hundreds of more absences were anticipated, forcing the cancellation of classes that morning.

Teachers, pensions and overrides: What to know about Bevin’s tax reform and budget vetoes

JCTA said in its Facebook post Monday that it wants “every member who has a personal day available to please use the personal day to go to Frankfort on Friday.” The union advised teachers to not use a sick day for this purpose.

“The Association does not agree with some of the regressive ways the revenue bill generates new revenue, but without a revenue bill, Kentucky will lose hundreds of millions of dollars in funding for public education,” the statement said.

When asked about a teacher walkout by a reporter after announcing his vetoes, Bevin warned against it.

“It’s illegal for them to strike in this state. I would not advise that,” Bevin said. “I think that would be a mistake.”

Bevin did not say Monday whether or not he will veto the pension reform bill, but he said it doesn’t solve the state’s pension crisis and more work must still be done.

The state is required to pass a balanced budget, Bevin said, but the plan the legislature OK’d this month includes miscalculations. He also criticized the current budget proposal for including around $600 million more in spending than the one he recommended and for lacking sufficient emergency funding.

Bevin has been taking heat from teachers amid the debate over pension reform and the other bills. A banner hanging over Interstate 64 westbound on Monday morning read, “Bevin & SB 151 is rotten to the core.”

“Any visible support teachers get from the public gives us hope that people see that public education is under attack by the GOP legislators and Matt Bevin,” Liz Palmer, a teacher at duPont Manual High school, said after seeing the banner.

“I’ve seen plenty of teachers talking online about giving up on teaching and going into other fields, and that’s just tragic. All we want to do is teach in this state.”