On Monday, educators from across the state of Massachusetts held a rally in Brookline, a part of the Greater Boston area, to protest the devastating budget cuts and job losses that are mounting statewide. Educators in over 50 school districts across the state have now been given pink slips or reduction-in-force (RIF) notices. The protest took the form of a caravan, with more than 500 vehicles driving from Brookline’s Larz Anderson Park to Brookline High.

The budget cuts sweeping across Massachusetts stem from the loss of income and sales tax revenue due to the COVID-19 pandemic and its economic fallout, which is being foisted upon the working class in every state. When the World Socialist Web Site broke the news on the cuts in Randolph, Massachusetts, one of the first districts in the state to face cuts, we warned that they were “a foretaste of what will befall many districts, teachers, and students.”

The protest on Monday coincided with the June 15 deadline for most districts to inform their employees of layoffs. Public schools are not obligated to publicize the lists or even numbers of educators they lay off, so in many cases workers and families in each district are still trying to determine the scope of the cuts. A reoccurring theme, though, is the high loss of jobs among the arts, music and physical education (PE) departments, as well as paraprofessionals and librarians. 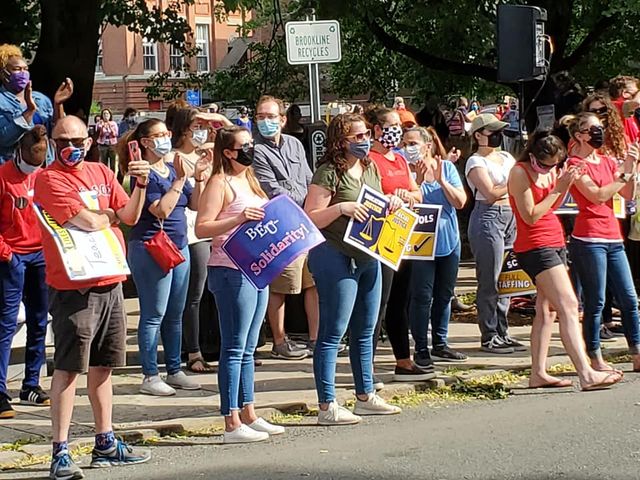 The numbers that are known paint a bleak picture. Many districts claim they plan to invite teachers back, depending on whether or not they receive additional funding from the state or their individual cities. However, there is no guarantee that this funding will be made available, and educators are now left in a state of jobless limbo.

In Brockton, 24 teachers received pink slips last week and the district intends to leave 40 teaching vacancies unfilled, with most positions in the arts, PE and music departments. Twenty-one paraprofessional and teaching assistants were also laid off, while another 39 who retired or left their jobs will not be replaced.

In Taunton, a district with only 960 full-time employees, 160 pink slips were distributed yesterday, cutting $5.8 million from the district’s budget. Those affected were primarily first- and second-year teachers, as well as 16 library assistants.

In Randolph, all K-12 arts, music and PE departments were essentially eliminated at the end of last month, with all teachers for each subject being cut, as well as multiple elementary and middle school social workers and guidance counselors.

In Brookline, 362 of the district’s 645 teachers were laid off over the past two weeks. Immense opposition from the community forced the district to rehire more than 300 of these laid-off teachers, but subsequently an unspecified number were again laid off, with district officials claiming they made a “mistake” by sending out rehiring e-mails to some teachers. In addition, roughly 300 paraprofessionals in Brookline face the prospect of joblessness, with their notification deadline extended to June 22, the day before the school year ends.Article continues below the form

A high school teacher in a nearby Massachusetts school district, who previously wrote to the WSWS to voice his opposition to budget cuts, spoke on the protest and the dire situation facing educators in Massachusetts and across the country. 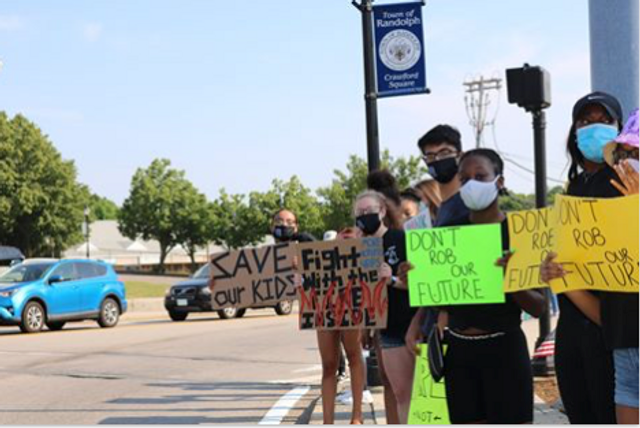 Commenting on the situation facing laid-off educators, he said, “Some could potentially be recalled if alternative sources of funding materialize, but that’s putting entirely too much confidence in Congress and the president. Even if we could rely on the government to adequately fund the education of its own citizens, this method of pink slipping new teachers every June and calling them back in August is cruel and degrading.”

The Massachusetts Teachers Association (MTA), which is allied with the same Democratic Party politicians imposing the cuts on the state and local level, released a toothless statement calling for minimal tax increases on corporations and the wealthy. Among their demands is that corporate taxes be raised from their current 8 percent back to their pre-2017 9.5 percent, a paltry measure, as well as the closing of a corporate tax loophole and increasing taxes on “unearned income” by an unspecified amount.

Significantly, the MTA also writes, “The U.S. Senate should pass the HEROES Act, already approved by the House.” This is a cynical charade being promoted by teacher unions and state Democrats across the US, who know full well that the act stands no chance of passing the Republican-led Senate, and that Trump has explicitly declared it “dead on arrival.”

“Union officials are failing miserably,” the high school teacher told the WSWS. “Merrie Najimy, MTA president, has known that this would happen for a long time, and yet we have this caravan hubbub only after the RIFs have been issued. Before that, and to this day, she has merely encouraged membership to contact their representatives and push them to support the HEROES Act, which as you know is a piece of political theater. The president of the Brookline Teachers Association, Jessica Wender-Shubow, actually proposed to solicit wealthy Brookliners for donations to help fill holes in their operating budget!”

Regarding the meager tax reforms pushed by the MTA, he said, “That’s unlikely to go anywhere, and if it did, schools would continue to depend on high rates of corporate and financial profit, and would still be vulnerable to the downturns and crashes inherent in a capitalist economy.”

The teacher noted that the unions used the protest to promote various Democrats. “It was something of a circus. The speakers consist of politicians up for reelection or their challengers, including Joe Kennedy who is running to unseat Ed Markey. In other words, the thing seems to have devolved into a dog and pony show for opportunists of all stripes.”

In order to fight, educators need new organizations of struggle, which are independent of the unions and both big business parties. In every school and neighborhood, rank-and-file committees should be formed to organize and wage the broadest possible struggle to oppose layoffs and budget cuts and defend the right to high-quality public education.

The claim that there is no money is a lie. The CARES Act, signed by Trump with the unanimous support of the Democrats, is handing over trillions in public assets to Wall Street and the giant corporations. What is needed is not appeals to the rich to increase their taxes but a political struggle by the working class for socialism and a radical redistribution of wealth.