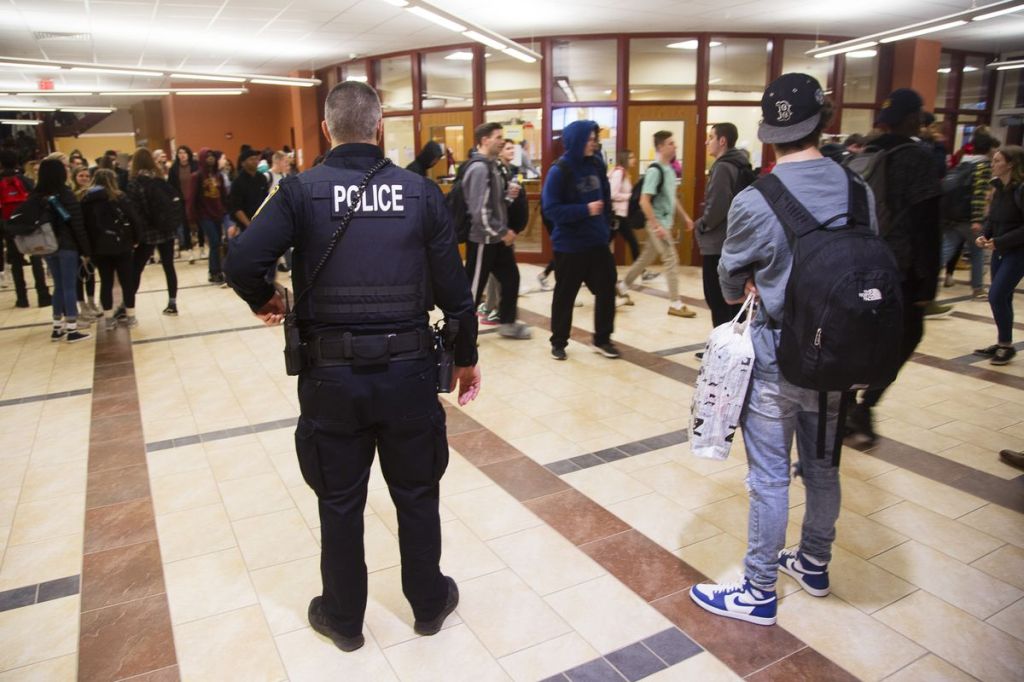 More than 800 parents, teachers and students have signed the request asking Portland schools to terminate an agreement with the Portland Police Department for the use of two school resource officers.

The use of school resource officers is coming under renewed scrutiny in Portland Public Schools as cities and school districts around the country examine the role of police in the wake of the death of a Minneapolis man in police custody.

A petition signed by more than 800 parents, students, teachers and community members and presented to the Portland Board of Public Education last week calls on the district to terminate its relationship with the Portland Police Department and remove the two officers that currently work at Portland and Deering high schools.

School Resource Officer Mike Bennis mans his post in the hallway at Portland High School. His duties are unlike those of other officers. Ben McCanna/Staff Photographer Buy this Photo

Though no formal action has been proposed, three school board members, including the board chair, said Monday they support ending the agreement and are open to a community conversation about the issue, which follows months of debate over a related proposal to equip all Portland police, including school officers, with body cameras.

The petition calls for the district to act in solidarity with the Minneapolis School District, whose school board voted unanimously June 2 to terminate an agreement with the Minneapolis Police Department to provide school resource officers, which are police that work in schools.

The Minneapolis Police Department has come under fire for the death of an unarmed black man, George Floyd, who died late last month after an officer knelt on his neck for almost nine minutes. The officer, Derek Chauvin, has been charged with murder and three other former officers who were at the scene are facing criminal charges. The case has prompted nationwide protests and calls to hold police accountable.Advertisement

School districts around the country are re-examining their relationship with school resource officers, who have become increasingly common in schools over the last two decades because of the rise in school shootings and in an effort to prevent such violence.

The school board in Portland, Oregon, announced last week it would stop using school resource officers and some school board members in Denver have called for the same.

“I think this woke up a lot of the community,” said Victoria Parker, whose four sons are Portland Public Schools students and who presented the petition to the board last week. “Most of the community didn’t even realize this was a topic being discussed. A lot of parents are just now educating themselves on the history around officers.”

Pros and cons of school policing are debated at Portland forum

While there has been little research on the impact of school resource officers in Maine, critics of the job often link the presence of officers to discipline disparities for students of color and with disabilities, and a lack of data showing improved safety outcomes.

Portland Police Chief Frank Clark did not respond to requests for an interview Monday. At a public forum in March he said the officers are key to building relationships between schools and the community, that they enhance the feelings of safety and serve as positive role models and mentors for students.

A first-of-its-kind study at the University of Southern Maine last fall found little consistency among schools in Maine when it comes to training and oversight of officers. The study estimated there are at least 71 officers currently working in school districts around the state.Advertisement

Portland Public Schools has two full-time armed officers — one each at Portland and Deering high schools – and pays the police department about $130,000 for them. The officers have been working in the schools for years, but have come under recent scrutiny due to a proposal by Portland police to equip all their officers, including the two who work in schools, with body cameras.

School board members last fall raised concerns about student privacy and whether the police department or schools would retain custody over the videos. The issue was still being debated, but was put aside when the coronavirus pandemic hit in March.

Superintendent Xavier Botana did not respond to a question about whether he would support ending the agreement with Portland police, but said in an email Monday that the board’s policy committee will discuss revisions to the memorandum of understanding at a meeting Wednesday.

Over the weekend,Rodriguez said the board received about 100 emails in addition to the petition, with most calling on the board to examine the removal of officers from schools.

“I think it would be helpful for the entire community to participate in a conversation about policing in our schools and that we figure out if removing the SRO’s from our schools is what we really want to do,” Rodriguez said. “If so the board should respond accordingly.”

Next week’s school board meeting is scheduled to be the last one of the school year, and Rodriguez said he could not say whether the board would take up school resource officers. “I don’t think the intention would be to put an item on the agenda to just cut the program without some work ahead of it,” he said.Advertisementhttps://650e463d8fd989008bd055064e8e9e13.safeframe.googlesyndication.com/safeframe/1-0-37/html/container.html

“This issue was on the front burner within the district well before George Floyd’s murder,” Figdor said. “I think right now with the eyes of the nation focused on the racism inherent within our police departments it’s really an opportunity to reevaluate whether we want to continue to have SRO’s in Portland Public Schools.”

Several teachers and students have expressed support and gratitude for the two officers currently in Portland schools, and Burk said the move to eliminate the program is not meant as a criticism of them.

“Nationally it’s an issue,” Burk said. “I’m not interested in Portland exceptionalism and pretending like if only more SRO’s were like our SRO’s it wouldn’t be a problem. I don’t think that’s the way to address that. It’s also a signal. If I was a young black kid and I had to walk into my high school and the first person I saw was a police officer, I don’t think I could show up to do my best work.”

Board member Sarah Thompson said the issue is “not so black and white for me” and while she is not calling for an end to the program, she is open to a community conversation.

“I think Portland, Maine, is a lot different than other cities and states,” Thompson said. “I think they’ve played an important role at the schools, but I certainly hear the community and it’s an important conversation to engage in. I also feel it has been a while since we’ve reviewed what the job description is, so I feel it is in everyone’s best interest to take a look at what they’re doing in their daily activities at the schools.”Advertisement

The petition presented to the board says while a strong relationship between the school district and police department is important, “we do not need them within the schools to feel safe, when the department is so close and responsive to our district as a whole.”

It calls for the district to replace the officers with social workers specifically skilled and qualified to work with students of color, particularly black students and students of new immigrant families for whom English is not their first language. Parker said, however, the community is open to other suggestions from the district.

“I know they have a broader plan to eliminate systemic racial (disparities in) education, and adding another social worker may not be a part of that,” she said. “We have expressed to our assistant superintendent and the people working on that stuff very loudly that whatever they decide is the issue it’s all around the same thing: how do we support our students of color, specifically black and immigrant families? We’re here for that dialogue.”