By Theresa Waldrop and Allison Brennan

Willow Creek, Montana (CNN)The children filed in, one by one, keeping their distance, to have their temperature taken at the door as Willow Creek School in Montana opened Thursday.”They’re incredibly excited. They are so glad to be back,” said Erika Wahl, the mother of two students at the school, which has between 50 and 60 students in grades K-12. “They miss their teachers, they miss their friends.”While 48 states and Washington DC have ordered or recommended that schools close through the end of the academic year because of the coronavirus pandemic, schools in Montana and in Idaho opened this week, with only weeks to go until school is out for summer.Montana Gov. Steve Bullock said last month that the state’s schools may reopen as soon as May 7, although it’s up to the local districts to do so. 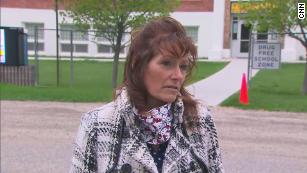 Bonnie Lower, Willow Creek principal and superintendent, said the school is ready.Gallatin County, where Willow Creek is located, had the highest confirmed number of Covid-19 cases in Montana counties, 146, with one death. The rest have recovered, and the county now has no active cases, according to the state’s health department.Most parents were in favor of reopening, even for just a few weeks, the Willow Creek principal said.”We polled our parents, and 76% of our students would be returning if we could reopen our doors,” Bonnie Lower, who’s also the superintendent at Willow Creek, told CNN.

“And with the staff on board, we asked the board, took them the numbers, and they said If we can we should make it happen, the kids deserve to be able to finish the school year,” Lower said.As the yellow school buses pulled in front of the school at Willow Creek on Thursday, staff members wore masks and carried pool noodles to measure distance, so that the mandated six feet of separation was kept.”I’ve been trusting them for the last several years to take care of my kids, I’m trusting them now,” Wahl said as the school reopened.The school will alternate when students are let out of class, so there are fewer in the hallways at once, Lower said. 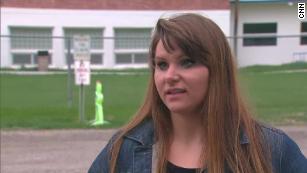 Erika Wahl said her children were excited to be back at schoo.”Common areas are being disinfected regularly, every classroom has hand sanitizer, wipes,” Lower said. “Teachers have masks, so if they’re in a student’s bubble, they put the masks on. So — a lot of precautions.”Bathrooms are used one at a time, and there are distancing marks on the playground.The students aren’t required to wear masks.Not everyone in the community of about 200 people is as excited as Wahl’s children.

Some criticize the decision

“I think it’s a travesty,” Stephanie Labanowski told CNN. “Just because it’s not in your backyard doesn’t mean it’s not something to take seriously,” she said, speaking of the virus.Labanowski said she’s a substitute teacher at a nearby Three Forks school, which hasn’t reopened.”I honor their decision not to open up. I think that’s a very smart thing to do,” she said. 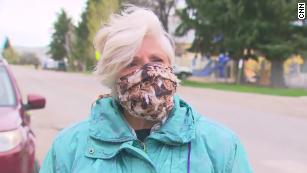 Stephanie Labanowski said she doesn’t understand the board’s decision to reopen now.Billie Caldwell, who has a daughter and a son at the school, said she’s continuing to homeschool for now, but not because she doesn’t support the decision to reopen.”I don’t think they would stick with the social distancing,” Caldwell said of her children.The decision to reopen wasn’t a difficult one, Lower said.”Honestly, we didn’t really wrestle with it much at all,” she said. “We had talked about it, that if we had the opportunity to open, we would open.”During the shutdown, children were falling behind in learning, and working parents were struggling to both do their work and teach their children, Lower said.

Should your kids go back to school? These studies suggest not“It was just very very difficult,” Lower said. “And I believe that the parents are confident that we are going to take good care of their kids while they are here.”For Lower, there’s still much to be gained by opening now, just weeks away from the summer break.close dialog

The day’s biggest stories in 10 minutes or less.Sign up and get access to videos and weekly student quizzes.Sign Me UpNo ThanksBy subscribing you agree to ourprivacy policy.“The teachers get some closure, the students get closure,” Lower said.”We can do some year-end assessments, we actually will figure out what this looks like right now, so coming into the fall if this is the norm, we’re ready.”