The district’s approximately 585 teachers at its 11 schools in Union City and south Hayward, as well as the district’s 11,000 students, are expected to be back in the classroom Monday morning, in time for the last week of school.

The final teachers’ vote was 302 to ratify the agreement, and 200 who voted “no.” Negotiators with the teachers association and the school district reached the agreement Friday night. The school board must still formally approve the agreement; its next scheduled meeting as of Sunday night is Tuesday, June 18. 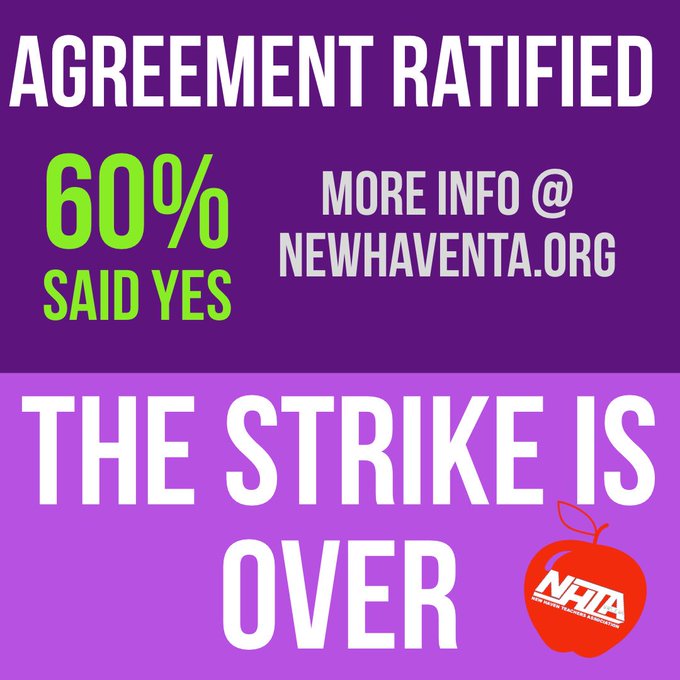 Teachers had been considering the latest offer from the district since late last week.

“Our unity with each other on the picket lines was an incredible display of power that resulted in some real gains for our union,” Ku’e Angeles said. “The strike brought us together and made us stronger as a union to fight for our students, connected us with parents in a way we have never seen before in Union City.”

Angeles said the agreement isn’t everything teachers wanted, but that the talks have convinced New Haven district managers to prioritize budgeting to attract and retain teachers and work to lower class sizes.

In a short statement Sunday night, New Haven district spokesman John Mattos said, “We are happy that all of the New Haven community will be able to participate in our students’ end-of-the-year activities and celebrations.”

While a welcome relief, going back to the classroom Monday won’t be easy, Angeles said.

“New Haven educators are angry and feel betrayed by NHUSD administrators, especially by our retiring superintendent. Educators feel like district managers are profiting off of teachers and this strike,” he said. “And once again, teachers feel they are helping district managers fix their financial problems.”

These negotiations have been contentious, with negotiators from both sides publicly insulting each other over the past two weeks as the strike dragged on. It was the first teachers’ strike in the district’s history.