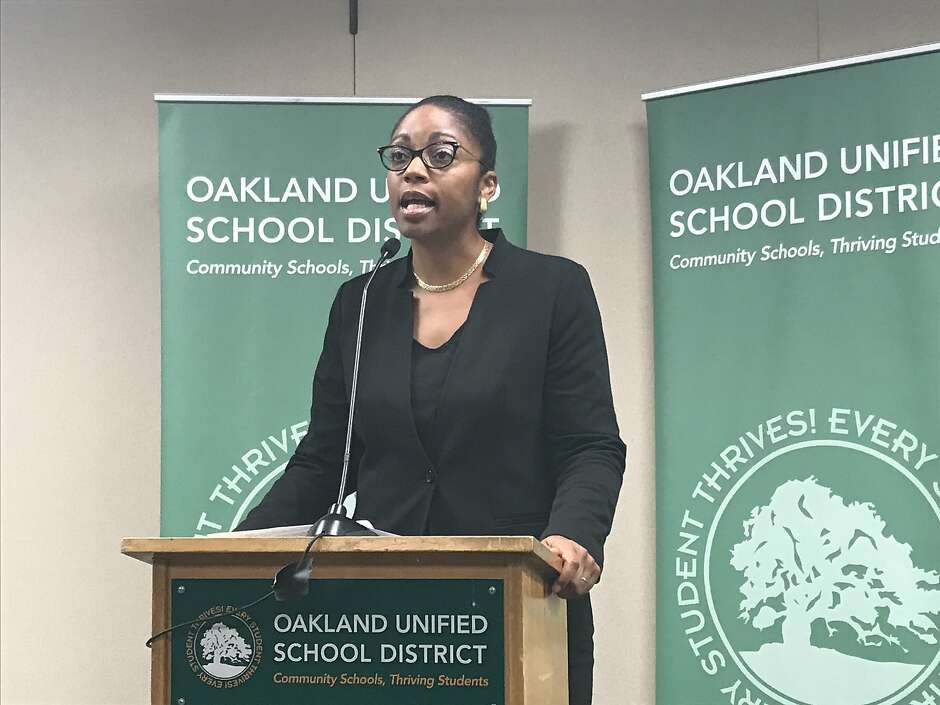 Oakland Unified School District could lay off nearly 150 employees in an effort to address the struggling district’s budget deficit, in a multifaceted plan laid out by the superintendent Wednesday.

District officials are looking to slash nearly $22 million in spending next year, with more than half of the cuts expected to come from the district’s central office. The rest of the plan calls for reduction in schools’ discretionary spending, contracts and operational spending.

In total, Superintendent Kyla Johnson-Trammell’s proposal calls for $21.75 million in cuts, down from $30 million that had been proposed earlier. District officials reduced the number after receiving an improved financial outlook and to reduce the burden of making such a drastic jump in one year.

Johnson-Trammell’s plan makes nearly $12 million in cuts from her own office, which could result in layoffs of around 90 employees.

“The central office and school sites are like a circulatory system,” she said. “When we have a reduction in central, it does have an impact on school sites.”

Close to 60 layoffs could happen across school sites for support staff, such as security officers and staff members who work with student behavior and discipline. The reductions are necessary to reach Johnson-Trammell’s goal of providing quality education and maximizing student resources, she said.

“We must lean in and fundamentally change how we do business in Oakland,” she said. “OUSD is far from perfect.”

After discussion on Wednesday, school board members will vote on the plan Monday or make recommendations to adjust the proposal.

Increased pension costs, a loss of students to charter schools and years of overspending have helped put the district in fiscal crisis. The district’s planned cuts take into account a 5 percent raise for teachers, whose contract expired 18 months ago, but the union has demanded 12 percent and other concessions, including smaller class sizes.

She emphasized the “community of schools” plan, to consolidate or close schools in order to fix the district’s biggest problem: flat enrollment, with too many schools for its nearly 37,000 students. Across 87 schools, nearly 11,000 seats sit empty, Johnson-Trammell said.

Last month, the school board voted to close Roots International Academy, a small middle school serving East Oakland, to much criticism from parents, teachers and staff.

“We need to do the work of making sure we are right-sizing the district but we also need to do the work of investing in our teachers so we have retention,” she said. “It’s not just one strategy that’s going to get us out of this vicious cycle — it’s many different strategies together that’ll help us be in a position to provide better quality education for our students.”

In the coming weeks, the district could face a teacher strike if contract negotiations sour. Oakland Educational Association voted overwhelmingly last week to authorize a strike over low pay and large class sizes, and walkouts could start after Feb. 15.

If the teachers strike, Johnson-Trammell’s top priority is student safety, she said. The district could bring in substitute teachers and send staff from the central office to fill their places and ensure the schools stay open. A former teacher and principal, she said she empathizes with the teachers’ demands, and negotiations are ongoing to accommodate them.

“We support our teachers and do not want a strike,” Johnson-Trammell said. “We all want smaller class sizes, higher pay, more counselors and support staff, but we must figure out how to make this happen with our current financial reality.”