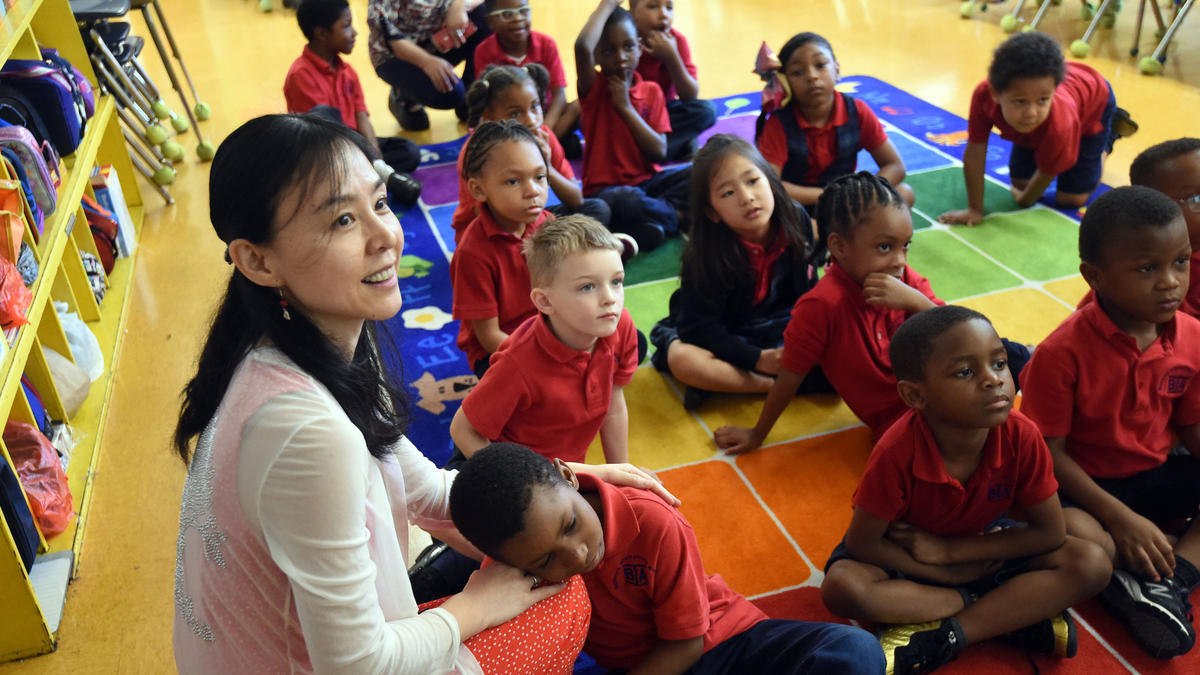 The Baltimore International Academy begins each morning with roughly 720 students reciting the Pledge of Allegiance in all five of the United Nations’ official languages.

For the rest of their day, children in kindergarten through eighth grade can be heard chattering, learning and singing almost entirely in Arabic, Chinese, French, Russian or Spanish.

This kind of language program is usually reserved for “children of means,” school officials say. But this is a public charter school in Northeast Baltimore, serving mostly minority students, many from low-income families.

The school, which aims to produce the next generation of global leaders, is looking to open a second location in West Baltimore in the 2019-20 school year. It’s one of six charter school applications that the school board is considering before a scheduled June 12 vote.

Other schools being considered include a year-round high school in Southeast Baltimore with a focus on internships and an all-boys school focused on the arts and sciences.

But the applications come at a challenging time for charter schools in the city. The school board recently passed a budget that officials from some existing charter schools say puts their viability at risk.

The Baltimore City school board is considering applications for six new charter schools in the city, including a second location of the Baltimore International Academy.

Next year’s $1.3 billion operating budget includes a cut of roughly $5.5 million for the city’s 34 charter schools, which serve about 20 percent of Baltimore’s roughly 80,600 public school students. Under a new funding formula, charter schools will be paying the district millions of dollars for services, such as long-term substitute teachers, that were previously covered by the school system. Some principals say the funding cuts will mean fewer staff positions and larger classes, and could endanger the programming that sets their schools apart.

The district remains locked in a 2015 lawsuit filed by a group of charter school operators who allege the district has failed to meet contractual obligations to charters and has not been transparent or consistent in the way it allocates funding to those schools.

Given those challenges, “it’s a pretty tough environment” to be starting a charter school, said Nicole Harris-Crest, the executive director of the Maryland Alliance of Public Charter Schools. “But it adds additional people to the movement to fight for equitable funding.”

Before the charter hopefuls made their case at a recent meeting, school board chair Cheryl Casciani assured them: “This is a district that very much values charter schools.”

Administrators say the new funding formula is a fairer and more accurate way to charge the schools for services they receive. The district has emphasized that all schools in the city need more money, and traditional public schools took a big hit two years ago while charters were slightly more shielded.

The state recently announced plans to award grants of up to $900,000 over three years to applicants who start, expand or replicate charter schools.

Charter schools are publicly funded campuses that are given more autonomy than traditional public schools. The district provides more money per pupil to charters because they don’t receive the same services from the central office as traditional schools.

Charters are responsible for paying for their own buildings and maintenance, among other expenses. Other costs — such as payroll and standardized test administration — are absorbed by the school district.

The funding uncertainty around charters “does make you think before wanting to open another school,” said Kona-Facia Freeman-Nepay, the founder and director of Baltimore International Academy Inc.

But her organization decided it was important to offer more students in West Baltimore the chance at a high-quality education taught in another language. Like the original Baltimore International Academy, the second campus would be an International Baccalaureate school, meaning students would learn from a challenging, internationally recognized curriculum. It could eventually serve up to 1,200 students in kindergarten through eighth grade.

On a recent morning, kindergarten teacher Beatrice Tchapda led students in a rendition of “If You’re Happy and You Know It” entirely in French. A few doors over, a group of 6-year-olds worked to master their knowledge of Chinese characters.

Students study English for an hour a day, but all their other subjects are taught in their foreign language.

“When we first came to Baltimore City, people did not believe the kids here were ready for this,” Principal Elena Lokounia said. “We believe that the kids in Baltimore deserve this, to be taught in such a unique environment.”

Half of this year’s charter school applicants indicated that global studies would be a focus of their programs.

The proposed CEC Baltimore Campus, to be located in East Baltimore, would focus on international affairs.

The Baltimore Latin School also plans to offer intensive language classes. This proposed all-boys school with optional boarding in the Mount Vernon neighborhood was late with its application, and wouldn’t be allowed to open until the 2020-21 school year.

Southwest Baltimore’s Green Street Academy is asking the board for permission to expand grades. It’s currently a middle and high school, but wants to add an elementary program within the same school.

“A lot of the students we get are very far behind in measurable reading and math metrics when we receive them in sixth grade,” executive director Dan Schochor said. “We think we can do a good job of ensuring kids remain at grade-level in their elementary years, which will propel them during their middle and high school experience.”

A few of the charter applicants are trying again after having been rejected in previous attempts.

Officials at the DaVinci Collaborative High School, which would be a year-round school with a focus on internships, say they’ve revamped their application in preparation for this year’s approval process. The operators said they have worked with the district to address concerns related to how they would serve students with special needs.

That part of the city is dealing with a shortage of young students. This winter, the school board briefly considered shutting down William Pinderhughes Elementary/Middle School in Sandtown.

District officials said there weren’t enough young children in the area to fill three elementary schools in relatively close proximity. The new charter would be a fourth.

But charters can draw students from across the city, not just their immediate neighborhoods. And the charter operators said many in the Sandtown community have expressed a desire to attend the Ames-Sandtown Freedom and Democracy Academy.

“Our position is that we’re not worried,” said Cecil Gray, one of the founders. “When people see the work we’re doing there, folks are going to want to bring their children to us.”

The district can revoke a school’s charter if it is found to be underperforming, financially unstable or mismanaged. If everything checks out, schools may be renewed for either three- or five-year terms.

The district identified two charter schools this year as troubled: Banneker Blake Academy of Arts and Sciences and Independence School Local I. Both were given one-year contract renewals on the condition they work with the district to improve.