Educators in Oklahoma and Kentucky could be seen all over social media on Monday as they skipped school or used their spring break vacations to march in protest of changes to their pensions and advocate for more school funding.

The teachers and their supporters were inspired by their colleagues who demonstrated just less than one month earlier in West Virginia. The efforts of teachers in that state led to Gov. James C. Justice signing a bill to give teachers a 5 percent raise after their statewide strike lasted almost two weeks.

Last week, Arizona teachers rallied at the state Capitol in a #RedforEd protest over low pay and low funding from the state.

Why are educators deciding to strike and protest their state governments nationwide? And will teachers in California follow suit? Here’s what you should know.

Schools across Oklahoma shuttered on Monday as teachers demonstrated there, and classrooms were not expected to reopen for at least another day.

Edmond Schools will be closed Tuesday, April 3 due to the statewide teacher walkout. #Oklaed#oklaedwalkout#OKwalk4kids

The walkout occurred despite Gov. Mary Fallin signing legislation increasing taxes on cigarettes, fuel and oil and gas production to provide teachers with raises of about $6,100 a year, or 15 to 18 percent. It also added $50 million in education funding, but protest organizers said that wasn’t enough.

About 200 school districts were shut down on Monday.

In Kentucky, hundreds of educators banded together on Friday to call in sick in protest to a change to their pension system. Then on Monday, they marched to the state Capitol with the same complaints, also demanding more funding for schools.

The protests led to the closure of some schools throughout the state who weren’t already on spring break. The educators’ outcry was in response to legislation state lawmakers passed last week cutting pensions for new teachers. 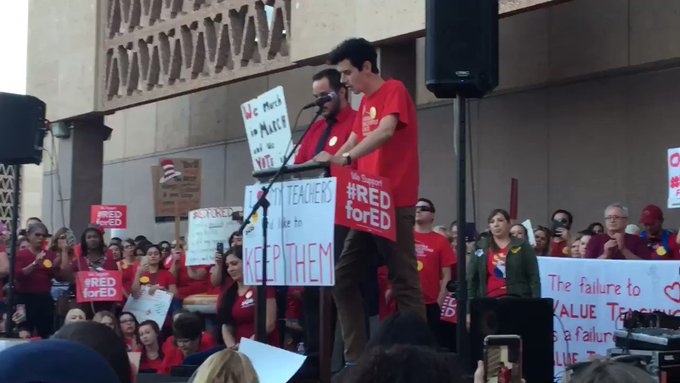 Arizona teachers and supporters rallied in the Capitol last Wednesday calling for a 20 percent pay increase. Some also threatened to copy West Virginia teachers and go on strike.

Ahead of the rally, some teachers had participated in a “sickout” where they collectively called in sick, which led to some schools being closed.

The educators also called for state education funding to return to pre-recession levels and more competitive pay for teachers’ aides and paraprofessionals, according to The Arizona Republic. The protesters wore red and carried signs that said #RedforEd.

The rally and calls for action continued despite the extension of a sales tax expected to provide $500 million for schools over more than two decades and an already-approved plan to give the educators 2 percent total raises.

On Monday, Gov. Doug Ducey said the 20 percent raise would not happen, so the protests are likely to continue.

West Virginia schools were closed for nine days in late February as their teachers went on strike for improved wages and benefits. The effort culminated in a 5 percent raise for all state public employees.

“The strike and its strong outcome should be seen as a shot across the bow to every lawmaker who may underestimate the support teachers have, the hard job they do and their willingness to stand up for what they deserve as they educate the next generation,” Christine Campbell, president of the American Federation of Teachers’ West Virginia branch, said.

The strike — which was only planned to last two days — went on despite the state governor approving a 2 percent raise.

While there are no signs of planned protests or organizing over similar demands here in California, the California Teachers Association tweeted late Sunday in support of Oklahoma teachers.

Are you a California teacher or taxpayer who has an opinion about this? Let us know below or email me.