It’s too early to declare a season of American revolt, but forces of activism and protest are stirring across the country that may yet nurture a genuine political pivot point.

Tens of thousands of teachers left their classrooms behind Monday to rally at state capitols in Oklahoma and Kentucky, demanding better pay and more funding for schools making do with out-of-date textbooks.
The protests followed a successful strike by teachers in West Virginia, who got a 5% pay raise and faced down a Republican-controlled legislature, a coup that inspired teachers across the country.
Teachers are not the only people inspired to take to the streets. Women’s marches, which started as a response to Donald Trump’s presidency, spread across the globe for their second edition in January. 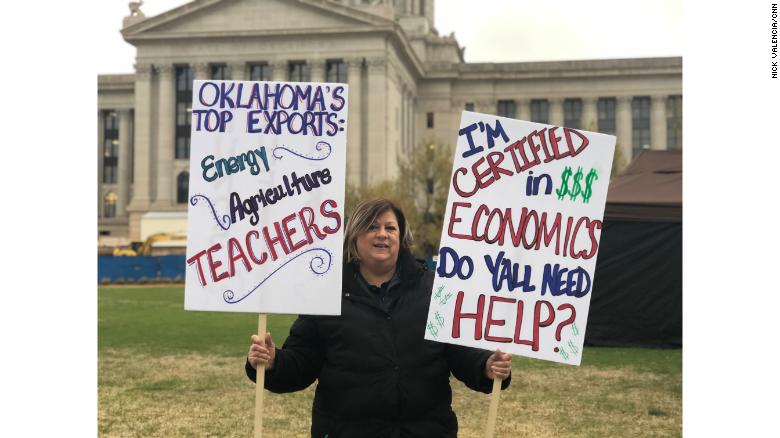 And the way the grief of survivors morphed immediately into angry activism following the high school massacre in Parkland, Florida, led to a day of protest in cities across the nation last month bolstering the fight for gun law reform.

“These strikes of the teachers, combined with the Parkland students uniting on the issue of gun violence with inner-city communities of color and kids that have been facing it every day of their lives, to the women’s march, to the immigrants and dreamers that kept pressing Congress to do the right thing, the key lesson here that is being learned is that when we organize together — and when teachers organize together in unions — we have the power to make incredible changes,” Mary Kay Henry, international president of the Service Employees International Union, told CNN on Monday.
So far, though, none of these separate efforts have yet wrought fundamental and lasting political change, but they have energized sometimes sterile debates.
It remains to be seen whether these outbursts of activism are sustained and become analogous to the raw power and energy of the tea party movement that sprung up a decade ago amid the economic meltdown and helped remake the Republican Party.
But these awakening political forces do represent a spike in engagement and activism that appears to have significant room for growth. And they are taking place at an unusually politicized moment, fostered by the partisan hypertension of the Trump era that is dominated by a divisive President who inspires veneration among supporters and hatred among opponents, following a bitter 2016 election that left deep unhealed wounds.

It would be wrong, however, to view the action by the teachers as partisan in nature, though demands are so far being made of legislatures in red states where years of GOP austerity and tax cuts have drained public coffers.
But they do share some characteristics of some of the other outbursts of activism seen in the Trump era. They are, for example, seeded by social media, which allows protestors to self organize quicker than their labor unions.
Protests are also erupting up because people are seeing news coverage of activism elsewhere and asking themselves the question, “What am I doing?”
Alberto Morejon, an 8th grade teacher in Oklahoma, was inspired to act after seeing what went on in West Virginia.
“I got on Facebook and I typed in … Oklahoma walkout, teacher walkouts,” Morejon told CNN’s Bill Weir. “Nothing popped up and I was like — why not be the guy that makes the group? Now it has 72,000 people … next thing you know it just exploded.”
Oklahoma’s teachers have already had some success — the state legislature has voted to raise taxes for the first time in 28 years — including on the oil and gas industry to fund a pay rise of about $6,000.
But in the state which has among the lowest pay scales for teachers in the country, activists want more. A high school teacher for example makes an average of $42,400 per year in Oklahoma, according to the Bureau of Labor Statistics, compared to the national average of $61,420.
Many teachers in the state work two or three jobs just to pay their basic bills and are frustrated at years of broken promises by lawmakers to increase education funding and paltry teacher pay.
So far, by winning their demands for better wages with calls for an increase in school funding, Oklahoma teachers have also managed to maintain the support of school superintendents and parents. Their actions may also inspire follow-on protests elsewhere — Arizona is expected to be the next state hit by walkouts.

Expectations that a wave of protests on different issues could coalesce into a movement of national political change are tempered by the modesty of some of the goals that are inspiring marchers.
Teachers just want better terms and more funding for schools. No one thinks the protests will turn heartland red-states blue — though they could make conservative lawmakers more responsive to public spending.
The kids of Stoneman Douglas Elementary school did not bust inertia in Congress over changing federal gun laws. But they did have some success in forcing state lawmakers in Florida to defy the National Rifle Association and raise the minimum age for gun purchases to 21 from 18.
More importantly, the Florida school kids changed the terms of the national gun debate and provided a template for survivors of future firearms tragedies to turn their own bereavement into political action.
The millions of women who took to the streets to protest Trump have not succeeded in ousting the President: their test will come in 2018 and 2020 when it will be revealed whether activism translates into real votes in elections.
Yet in a way, the teachers, gun law protesters and marching women do share a fundamental motivation — that may even also help explain the populist revolt that helped Trump get elected in 2016.
Everyone involved is broadly making the point that the political system and those in power have failed them — sometimes in the most fundamental of ways, for instance, providing jobs in Midwestern states or offering a basic education or keeping kids safe in their classrooms.

How the protests of 2018 will ultimately rewrite federal politics remains to play out. But neither party can afford to rule out the possibility that the political plates shifting now could color the midterm elections in November.
If the spirit of revolt heats up, it could change the assumptions of Republicans, who believe selling last year’s massive tax cut is their best argument and Democrats who are struggling to come up with an economic message to win back supporters who defected to Trump in 2016.
Whether the protests wither or proliferate could also hinge on whether a charismatic politician can coral the anger and mold it into a winning political message — as Trump did on immigration among grassroots conservatives two years ago, an argument he continued to stoke in a weekend tweetstorm.
One potential Democratic presidential candidate, Sen. Elizabeth Warren on Monday showed how she might tap into the teacher protests, by sharing a folksy reminiscence of her 2nd grade teacher Mrs. Lee.

Things look very different now. Many teachers work 2 or 3 jobs before & after school & weekends to make ends meet. They struggle to teach while their school’s funding plummets year after year. They use their own money to buy basic school supplies or help out their students.

Teachers in OK, KY, WV, & all across the country change the lives of little girls and boys every day. They deserve our respect & support. I stand in solidarity with those teachers who are fighting to support their families & invest in their students. Their fight is our fight.

“Teachers in OK, KY, WV, & all across the country change the lives of little girls and boys every day,” Warren wrote in a Twitter thread. “They deserve our respect & support. I stand in solidarity with those teachers who are fighting to support their families & invest in their students. Their fight is our fight.”
Trump, despite a blast of political attacks on various issues in recent days, has yet to weigh in on the teacher protests. But pressure is rising for him to do so.
“I would like to hear just messages of support from all levels, including President Trump,” said Oklahoma teacher Allyson Kubat.
But Kubat, who said the text books her kids use are so old they advise pupils to ask school librarians about “this new thing called the Internet” told CNN’s Wolf Blitzer on Monday: “Lip service is not enough.”
Given such passions, politicians will ignore protests sweeping the nation at their peril.
Join the Movement #iBelieve