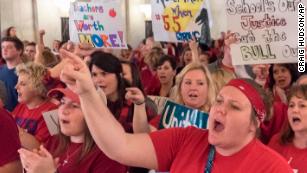 Tax cuts and budget cuts forced 20 percent of public schools in the state to switch to four-day weeks.

Time is running out for Oklahoma lawmakers. They have until April 2 to reach a spending deal or teachers will strike en masse.

Oklahoma’s teachers are rebelling against years of deep cuts to education that have left 20 percent of public schools on a four-day-week schedule and average teacher salaries ranked 49th in the country. Last year, about a quarter of the state’s public school teachers left the state or quit teaching altogether.

Those who remain have come up with a list of demands. Teachers want raises for all state employees for the next three years, plus more spending on health care and pension plans. They also want lawmakers to restore millions of dollars in school funding that have been cut in the past decade. To meet the educators’ demands, state legislators need to come up with $3.3 billion over three years to pay for it.

So far, lawmakers have come up short. The latest of several bills, which passed the Republican-controlled Senate Wednesday night after moving through the House, would raise taxes on cigarette sales, oil production, and diesel to pay for the raises. It would be the first increase in state taxes in 28 years, but would still only bring in $447 million for teacher pay raises, a fraction of the $3.3 billion needed to give teachers what they want. Gov. Mary Fallin is expected to sign the bill Thursday.

The Oklahoma Education Association isn’t backing down from its original demands. So unless a surprise deal comes together in the next four days, teachers and school administrators who serve 73 percent of the state’s students won’t show up to work Monday. State employees are prepared to strike too.

The battle playing out in Oklahoma is the latest chapter in a brewing fight over teacher pay, particularly in Republican-controlled states that have gutted school spending in recent years to offset deep tax cuts for businesses and wealthy earners. After the successful 10-day teachers strike in West Virginia, educators in Oklahoma, Arizona, and Kentucky saw hope for their own struggle. Average teacher salaries in these states are consistently ranked among the lowest in the country.

“We saw that a stoppage can work,” said Victor Gonzalez, an ESL teacher in Stillwater, Oklahoma, who juggles two part-time jobs while teaching full time. “Teachers are seeing that it worked [in West Virginia] and that it could get our legislators to move.”

Oklahoma finds itself in a budget bind after lawmakers slashed taxes for businesses and high earners year after year. A round went into effect in 2009; then taxes were lowered further in 2012 and 2014. The tax cuts were supposed to lead to an economic boom. Instead, they triggered a massive budget gap of about $1.5 billion each year.

To deal with the shortfall, the government cut spending everywhere. The cuts to education were so deep that 20 percent of the state’s public schools had to switch to a four-day school week. Oklahoma teachers made an average salary of $45,276 in 2016, according to the National Education Association; the state is ranked 49th in average teacher salaries. The last time teachers got a raise from the state was in 2008. Lawmakers weren’t planning to give them one next year either.

The state is also struggling to find, and keep, qualified teachers. About a quarter of Oklahoma City’s teachers left at the end of the last school year, and the state had to issue a record number of emergency teaching certificates: 1,917 for the current school year.

Now Oklahoma faces an estimated $425 million budget hole for the next fiscal year. Teachers were disappointed last month when lawmakers failed to get enough votes for a bill called Step Up Oklahoma, which would have raised more than $700 million by taxing cigarettes, diesel fuel, and wind energy, and by raising oil production taxes from 2 percent to 4 percent. Some of that money would have been used to give teachers a 1 percent pay bump.

The bill never passed because lawmakers couldn’t get enough votes to raise taxes. Instead, they passed a very different bill, one that would cut more funding from nearly every state agency, including $16.2 million from the Department of Education. The state’s Republican governor, Mary Fallin, signed the bill in late February.

A week later, as the teachers strike was unfolding in West Virginia, Oklahoma lawmakers reversed course and passed another bill that would use $19.9 million in lottery revenue to offset the education cuts. But there was still no pay raise in sight, and no new funding to make up for the $200 million in school spending cut from the budget in the past 10 years.

That was the last straw for teachers and school administrators. They decided it was time to talk about a strike.

The threat of a strike is already working

Emboldened by the success of the teachers strike in West Virginia, Oklahoma educators presented a list of demands to state lawmakers in February. They gave legislators about a month to pass a bill.

The group asked for a $10,000 average pay raise for teachers over three years — $6,000 in the first year, then $2,000 for each of the following two years. The raises would lift Oklahoma from the bottom of the nation’s teacher pay rankings, but it’s unclear by how much.

In 2016, a $6,000 average raise would have been enough to push Oklahoma from the 49th to 28th in teacher pay, right above Montana and Virginia. Oklahoma’s teachers are also asking for a $7,000 raise for school support staff over three years, raises for all state employees, $200 million in school funding, a 5 percent cost of living pension adjustment for retired teachers, and more funding for their health care plans.

The teachers’ demands add up to about $3.3 billion over three years. That’s money Oklahoma doesn’t have on hand.

Many politicians in Oklahoma City scoffed at the teachers’ list of demands, but they felt the pressure to do something. In recent weeks, lawmakers have proposed a handful of bills: One would have raised teacher pay by about $5,000, but it didn’t include more funding for schools or anything else (that bill passed, but not the bill to raise cigarette and oil taxes to pay for it). Another plan called for a $2,000 raise for teachers next year, and a $4,000 raise the following year, but it didn’t include anything else, not even a source of funding to pay for the raises. The Oklahoma Education Association opposed both measures.

The latest bill, which passed the Senate Wednesday, is the most generous yet, but the $447 million it would bring is still far too short. Teachers have rejected that proposal too.

But even the latest proposal represents a remarkable shift, considering that schools were facing millions of dollars in budget cuts and no raises for teachers next year.

“While this is major progress, this investment alone will not undo a decade of neglect. Lawmakers have left funding on the table that could be used immediately to help Oklahoma students, “ Alicia Priest, president of the Oklahoma Education Association, said in a statement Wednesday. “There is still work to do to get this legislature to invest more in our classrooms. That work will continue Monday when educators descend on the Capitol.”

Thousands of teachers are planning a Capitol rally on Monday during the stoppage. Over the weekend, they were brainstorming slogans for their signs in the Oklahoma Teacher WalkoutFacebook group, which now has more than 50,000 members. “My second job paid for this sign,” one teacher suggested. “This rally is almost as big as my class size,” wrote another. And: “My car’s bumper is taped together.”

It all started with West Virginia teachers

Teachers in West Virginia have been encouraging their peers in Oklahoma and other states, like Arizona, to keep up the pressure. West Virginia teachers went on strike for 10 days, winning a battle for a 5 percent pay raise.

“West Virginia first, Oklahoma next.” Katie Endicott, a teacher in West Virginia, told Democracy Now. “We wanted to inspire teachers all across the nation.”

Lawmakers, both Democrats and Republicans, have been cutting corporate and business taxes for more than a decade in West Virginia, Oklahoma, Arizona, and elsewhere. The idea was to attract investment in the states. But these states discovered the new investment wasn’t enough to offset the lost tax revenue. Then came the recession. Lawmakers slashed spending, hitting schools the hardest.

As a result, public schools have been losing millions of dollars each year in state money, the main source of funding for local schools, followed by local property taxes. The amount of money the state of West Virginia now spends on each student is 11.4 percent lower than it was before the economy tanked in 2008.

Teachers in West Virginia haven’t gotten an across-the-board salary raise since 2014, and they are among the lowest-paid teachers in the country. The average teacher salary in the state was $45,622 in 2016, according to the National Education Association, putting West Virginia 48th in the nation.

Teachers wanted a 5 percent raise for the coming school year, even if it meant raising taxes. They were also upset that their health care premiums were rising, and they were especially mad about a new rule related to their health care coverage.

In December, the Public Employee Insurance Agency, which handles health insurance for state employees, said workers would soon be required to start using a wellness app called Go365, which tracks a person’s sleep and exercise and reports their progress. Those who don’t meet their fitness goals would have to pay an extra $25 for their premiums and an extra $500 deductible if they wanted to opt out altogether.

About a month later, in January, teachers threatened to strike after lawmakers proposed an “insulting” 1 percent raise, without addressing health care costs. Labor unions scrambled to reach a deal with the governor for a 2 percent raise. Teachers rejected that too, prompting an unsanctioned “wildcat” strike.

On February 22, every school in the state had to shut down when teachers didn’t show up for work. Support for the teachers grew, with labor unions representing coal miners speaking out on their behalf. Teachers insisted on a 5 percent raise and lower health care premiums. State lawmakers agreed to a 4 percent raise instead. The strike continued until late Tuesday, when the governor and state lawmakers agreed to a 5 percent raise and a hold on health care premium hikes.

By then, teachers in Arizona and Oklahoma were already preparing their own revolt.

On Wednesday, teachers in Arizona were drafting their own list of demands, which they plan to unveil at a rally Wednesday in Phoenix. They said the 1 percent raise lawmakers agreed to give them next year is not enough.

Teachers in the state had one of the lowest average salaries in the country in 2016, and they saw the biggest drop in pay from 2015 to 2016, likely a result of inflation outpacing meager pay increases. The state also cut state spending per student more than any other state from 2008 to 2015.

They created a private Facebook group, Arizona Educators United, and began organizing a statewide campaign to wear red to school every Wednesday. Now the group is drafting its own list of demands to present Wednesday at a rally at the state capitol.