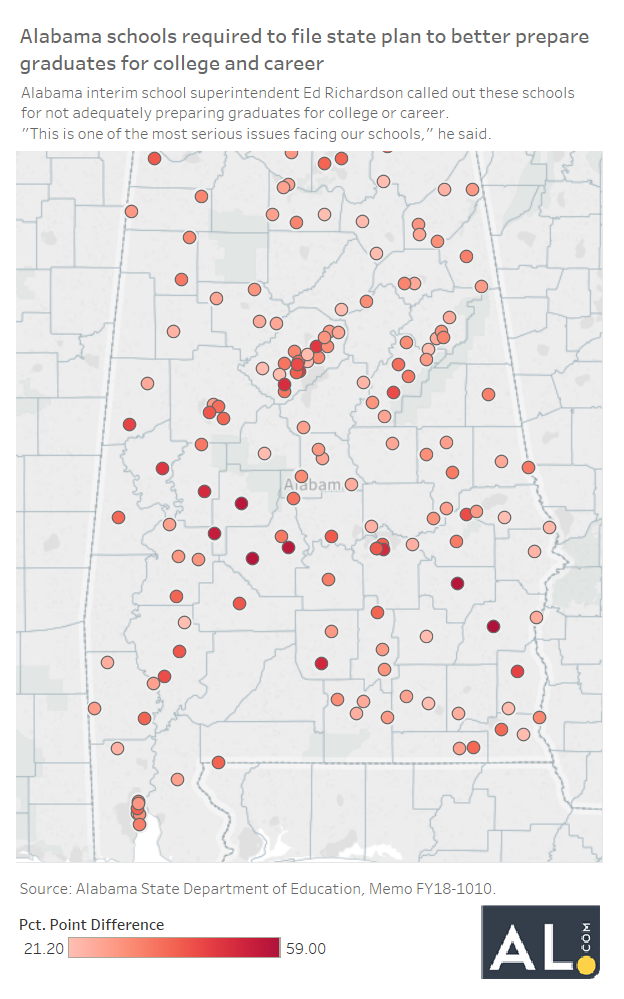 Alabama interim state superintendent Dr. Ed Richardson has called out more than 150 schools for not preparing their high school graduates to either go to college or begin a successful path to a career.

In a strongly-worded memo to superintendents statewide last week, Richardson wrote, “This is one of the most serious issues facing our schools.”

“Failure to address this issue immediately,” Richardson wrote, “will only result in more high school graduates and their families being led to believe they are ready for the next step in their lives when they are not.”

Alabama’s college and career readiness rate of 66 percent is 21 percentage points lower than the graduation rate of 87 percent. Richardson calls that gap “unacceptable” in his memo to superintendents.

Beginning in 2015, education officials began using college and career readiness indicators tied to benchmarks that signify graduates are ready for that next step.

Those college and career readiness indicators, from the 2016-2017 school year, counted as part of the grade in the state’s recently-released report cards.

The memo contains a list of 155 schools with a 12th grade, nearly half of all of those in the state, where that gap is more than 21 percentage points and the college and career readiness rate is lower than 66 percent.

After the state board of education voted in 2013 to drop Alabama’s high school graduation test, education officials looked for a new way to show that graduates were ready for college or a career.

Officials determined that a graduate is college- or career-ready if one or more of the following indicators are earned:

The use of college and career readiness indicators is becoming standard across the country, but the actual indicators can differ in each state.

Richardson asked superintendents of those schools to submit a plan to improve that rate by April 13.

State department spokesperson Dr. Michael Sibley told AL.com, “We don’t expect there will be a silver bullet that collectively solves this problem. But through thoughtful, active participation in developing a plan and utilizing best practices in the most impacted areas, we hope to realize positive change over time.”

Here’s a look at where those schools are. Hover over each marker to learn more about the student population at each school. Click here to view the map in a separate browser window.